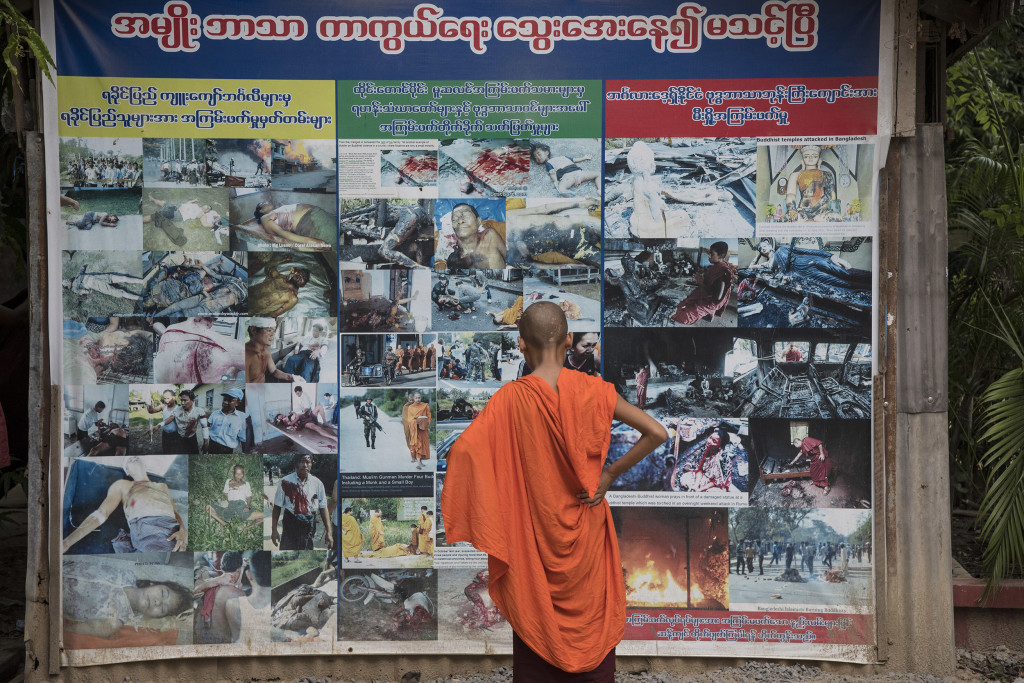 A young Buddhist looks at a panel filled with pictures showing atrocities allegedly committed by Muslims against Buddhists in Southern Thailand, in Mandalay, Myanmar on May 24, 2015. Phra Apichart Punnajanto, the head preacher at Bangkok’s popular Marble Temple, made headlines after calling on his social media followers to burn one mosque for every Buddhist monk killed in the Deep South of Thailand.Thierry Falise/LightRocket/Getty

4 Apr 2016 – Phra Apichart Punnajanto, the 30-year-old head preacher at Bangkok’s popular Marble Temple, tries to suppress a smile as he explains how very angry he is. The baby-faced monk pulls out documents, one after the other, and spreads them across the table. Next to him, a friend whom he has deputized to memorialize this interview snaps away on an expensive smartphone.

This, says Apichart, tapping forcefully on the paper, is a list of the 20 monks killed and 24 injured since 2007 in Thailand’s deep south. An insurgency in the predominantly Malay-Muslim region has been raging since 2004, and more than 6,500 people have been killed. Most of them have been Muslim civilians, though the statistical disparity doesn’t bother him. The death of a single monk, explains Apichart, should be considered a religious attack. “I was stressed before, when monks got killed and injured,” he says. “Now it’s past that point—no stress, just revenge. This is why I said those things about burning the mosques: because I want revenge.”

Late last year, Apichart made headlines here after calling on his social media followers to burn one mosque for every Buddhist monk killed in the deep south. The Thai government moved swiftly to shut down his Facebook page, but the controversy has only increased his popularity. In the months since, thousands more have flocked to follow him on social media. And for every user attacking him for “really divisive” rhetoric, there are two urging him to “keep fighting.”

The attention thrills Apichart, who says he studied communications in college and calls his social media foray an exercise in “journalism written with hate speech.” His Facebook page is filled with gruesome photographs that purport to show Buddhists hacked in the head with machetes, immolated and shot by southern insurgents. Many are from years-old incidents, widely reported by local and international news—though Apichart says he is the only one printing such information. He insists there is a conspiracy among Thailand’s newspapers to bury the “truth” and says his photos come from an intelligence officer (though a quick reverse-image search shows they have long been circulating on anti-Muslim Web pages).

“What I want to do is to make Buddhists who are still sleeping and think things are beautiful, I want to make them aware of what’s going on. Muslims aren’t trying to invade just the three [southern] provinces; they are trying to occupy the whole country,” Apichart says.

His idol is Myanmar’s firebrand monk U Wirathu, whose anti-Muslim rhetoric helped stoke deadly riots in 2012 and 2013. Unlike Wirathu and his extremist Buddhist group, Ma Ba Tha, Apichart has no backing from the government. But as Bangkok’s ruling military junta struggles to silence him, it is clear the Thai monk has tapped into a growing vein of Buddhist ultranationalism exacerbated by a failing economy and social discontent in the two years since the 2014 coup that brought in the latest military junta. “ There is a growing strain of anti-Muslim sentiment within the Buddhist sangha [monastic community] in Thailand,” says Anthony Davis, a Bangkok-based security analyst at IHS-Jane’s. “This thing isn’t some nasty little insect hidden away under a rock, it’s becoming mainstream.”

Increasingly, monks in Thailand are looking to their counterparts in Sri Lanka and Myanmar—two places where Buddhist ultranationalism has spilled into anti-Muslim violence. In February, Thai Buddhists hosted a conference on “Crisis in the Buddhist World.” A Sri Lankan monk talked about future threats to the religion, while the president of Ma Ba Tha led a session on laws to protect Buddhism before receiving a leadership award.

“We worry about the Muslim invasion in Thailand,” says Banjob Bannaruji , a professor at the Buddhist Mahachulalongkornrajavidyalaya University and head of the Committee to Promote Buddhism as the State Religion. Last year, as the government prepared Thailand’s newest constitution, Banjob resurrected a decades-old push to have the religion enshrined in the constitution. Buddhism, he insists, must be protected. “We are very threatened by Muslims because Islam is a dangerous religion in my view,” he says.

About 94 percent of the Thai population is Buddhist and 4 percent Muslim, but like many of his ilk, Banjob believes there is a conspiracy to spread Islam—which he claims entails smuggling Rohingyas and Bangladeshis into the country and hiding them in the mosques across the Northeast. “Why? Because they want to increase the numbers of Muslims here,” he explains. (While tens of thousands of Muslims fleeing Myanmar and Bangladesh have found their way onto Thai soil, it is generally because they were diverted and detained in camps by human traffickers seeking to extort money before either selling them into slavery or allowing them to continue on to Malaysia.)

In addition to this “invasion,” Banjob complains about more quotidian problems with Muslims. More mosques are being built, he says, students have begun demanding the right to pray during the school day, and others break tradition (such as in the case of a college student who, on religious grounds, begged out of a postgraduation custom of paying respect before statues of King Rama V and King Rama VI). “I don’t know why Muslims are taught to be narrow-minded,” Banjob muses.

In the deep south, I spoke to students who said they were aware of Apichart and concerned. “I’m afraid if the monks or Buddhists do [burn mosques] it will cause a problem. We’re all afraid religious conflict will happen and Buddhists and Muslims will kill each other,” says a 25-year-old religion student in Pattani province, who asked that his name not be used for safety reasons.

Security experts have raised concerns about the same thing. Zachary Abuza, a professor of Southeast Asian politics at the National War College in Washington, D.C., says there is little doubt that Buddhist extremism is on the rise and will hit hard an already alienated group. “A lready the Muslims [in the deep south] feel alienated,” he says. “In Pattani, there’s actually a very large Rohingya community [who have fled Myanmar], and I think they’d be very aware of…what’s happening with this radical Buddhist fascism and incitement to violence, and I think they do worry about it in the south.”

Pramote Samadi, a Muslim community leader and director of White Channel, an Islamic Thai-language cable channel, says, “Ordinary people are kind of frightened by such sentiments.” But he insists the worries are misplaced. “The other group of Muslims, the educated, the scholars, they aren’t really concerned. Muslims in this country have a long-established history and culture; they have played a big role in building institutions in the country.… It’s a different context and different factors from in Myanmar.”

There is concern among Buddhists too. “ A lot of people claim to be Buddhists, but they’re awful people,” says Sulak Sivaraksa, a pre-eminent Buddhist scholar and outspoken critic of those who preach violence. Apichart, he advises, “should give up being a monk. Give up being a Buddhist. The message of the Buddha is nonviolence, loving kindness and compassion…. Once you make [Buddhism] into a cult and bring it to nationalism, to ethnicity, that’s the danger.”

That the government and some Buddhists have condemned Apichart ’s virulent commentary is heartening, say Muslim leaders like Samadi, but such vitriol is clearly spreading. On Facebook, Twitter and Pantip—Thailand’s most popular forum—Buddhist Thais are gathering in droves to discuss the “Muslim problem.” A Facebook page whose name translates loosely as “unmask the unpropitious scoundrels and guard virtues” posts a range of anti-Muslim propaganda, calls for boycotts of Halal foods and dire warnings on the fate of Thai Buddhists—all of it eagerly monitored by nearly 18,000 followers. Some 4,000 people have liked the Facebook page whose name translates as “ anti-extremist Muslims in three southern provinces,” which posts frequently and to gleeful reception from a decidedly anti-Muslim audience. Twenty thousand people follow a page called “Protect the Buddhist Country,” which has gained traction for a push to nix a planned Halal food industrial zone in Chiang Mai.

All of which plays neatly in the hands of Apichart, who claims Buddhists across the country are lapping up his every word.

When I ask him what his next step will be, he replies coolly, but my translator stammers slightly as she conveys the meaning to me.

“The next plan is preparing the fuel to put in the bottle to make a burning bomb,” he says. “Not only my own, but Buddhists from the whole nation are going to do it as well. It’s to throw somewhere; nobody knows where. I’m just waiting for the time when a monk dies. Right now, I just keep distributing my ideology on social media.”