The Drugs That Built a Super Soldier

During the Vietnam War, the U.S. military plied its servicemen with speed, steroids, and painkillers to help them handle extended combat. 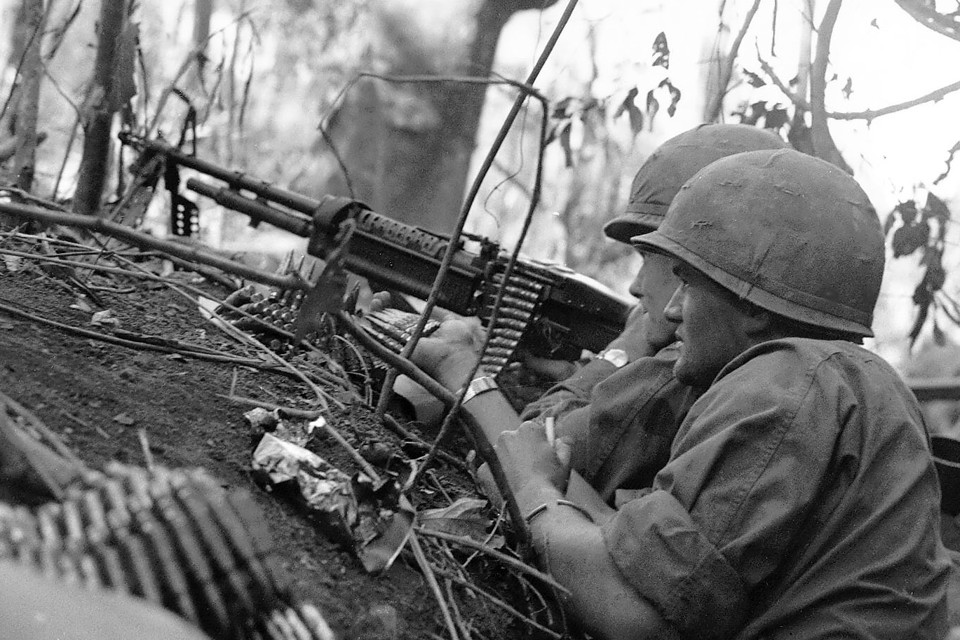 8 Apr 2016 – Some historians call Vietnam the “last modern war,” others the “first postmodern war.” Either way, it was irregular: Vietnam was not a conventional war with the frontlines, rears, enemy mobilizing its forces for an attack, or a territory to be conquered and occupied. Instead, it was a formless conflict in which former strategic and tactical principles did not apply. The Vietcong were fighting in an unexpected, surprising, and deceptive way to negate Americans’ strengths and exploit their weaknesses, making the Vietnam War perhaps the best example of asymmetrical warfare of the 20th century.

The conflict was distinct in another way, too—over time, it came to be known as the first “pharmacological war,” so called because the level of consumption of psychoactive substances by military personnel was unprecedented in American history. The British philosopher Nick Land aptly described the Vietnam War as “a decisive point of intersection between pharmacology and the technology of violence.”

Since World War II, little research had determined whether amphetamine had a positive impact on soldiers’ performance, yet the American military readily supplied its troops in Vietnam with speed. “Pep pills” were usually distributed to men leaving for long-range reconnaissance missions and ambushes. The standard army instruction (20 milligrams of dextroamphetamine for 48 hours of combat readiness) was rarely followed; doses of amphetamine were issued, as one veteran put it, “like candies,” with no attention given to recommended dose or frequency of administration. In 1971, a report by the House Select Committee on Crime revealed that from 1966 to 1969, the armed forces had used 225 million tablets of stimulants, mostly Dexedrine (dextroamphetamine), an amphetamine derivative that is nearly twice as strong as the Benzedrine used in the Second World War. The annual consumption of Dexedrine per person was 21.1 pills in the navy, 17.5 in the air force, and 13.8 in the army.

“We had the best amphetamines available and they were supplied by the U.S. government,” said Elton Manzione, a member of a long-range reconnaissance platoon (or Lurp). He recalled a description he’d heard from a navy commando, who said that the drugs “gave you a sense of bravado as well as keeping you awake. Every sight and sound was heightened. You were wired into it all and at times you felt really invulnerable.” Soldiers in units infiltrating Laos for a four-day mission received a medical kit that contained, among other items, 12 tablets of Darvon (a mild painkiller), 24 tablets of codeine (an opioid analgesic), and six pills of Dexedrine. Before leaving for a long and demanding expedition, members of special units were also administered steroid injections.

Amphetamine, as many veterans claimed, increased aggression as well as alertness.

Research has found that 3.2 percent of soldiers arriving in Vietnam were heavy amphetamine users; however, after one year of deployment, this rate rose to 5.2 percent. In short, the administration of stimulants by the military contributed to the spread of drug habits that sometimes had tragic consequences—because amphetamine, as many veterans claimed, increased aggression as well as alertness. Some remembered that when the effect of speed faded away, they were so irritated that they felt like shooting “children in the streets.”

Psychoactive substances were issued not only to boost the fighters, but also to reduce the harmful impact of combat on their psyche. In order to prevent soldiers’ mental breakdowns from combat stress, the Department of Defense employed sedatives and neuroleptics. By and large, writes David Grossman in his book On Killing, Vietnam was “the first war in which the forces of modern pharmacology were directed to empower the battlefield soldier.” For the first time in military history, the prescription of potent antipsychotic drugs like chlorpromazine, manufactured by GlaxoSmithKline under the brand name Thorazine, became routine. The massive use of psychopharmacology and the deployment of a large number of military psychiatrists help explain the unprecedentedly low rate of combat trauma recorded in wartime: Whereas the rate of mental breakdowns among American soldiers was 10 percent during the Second World War (101 cases per 1,000 troops) and 4 percent in the Korean War (37 cases per 1,000 troops), in Vietnam it fell to just 1 percent (12 cases per 1,000 troops).

This outcome, however, was short-sighted. By merely alleviating soldiers’ symptoms, antipsychotic medicines and narcotics brought immediate but temporary relief. Drugs taken without proper psychotherapy only assuage, suppress, or freeze the problems that remain deeply embedded in the psyche. Years later, those problems can explode unexpectedly with multiplied force.

Intoxicants do not eliminate the causes of stress.

Intoxicants do not eliminate the causes of stress. Instead, observes Grossman, they do “what insulin does for a diabetic: They treat the symptoms, but the disease is still there.” That is precisely why, compared with previous wars, very few soldiers in Vietnam required medical evacuation because of combat-stress breakdowns.  By the same token, however, the armed forces contributed to the unprecedentedly widespread outbreak of PTSD among veterans in the aftermath of the conflict. This resulted, to a large extent, from reckless use of pharmaceuticals and drugs. The precise number of Vietnam veterans who suffered from PTSD remains unknown, but estimates range from 400,000 to 1.5 million. According to the National Vietnam Veterans Readjustment Study published in 1990, as many as 15.2 percent of soldiers who experienced combat in Southeast Asia suffered from PTSD.

In her book Flashback, Penny Coleman quotes a military psychologist who says that

If drugs are given while the stressor is still being experienced, they will arrest or supercede the development  of effective coping mechanisms, resulting in an increase in the long-term trauma from the stress. What happened in Vietnam is the moral equivalent of giving a soldier a local anesthetic for a gunshot wound and then sending him back into combat.

This article has been adapted from Lukasz Kamienski’s book, Shooting Up: A Short History of Drugs and War, published by Oxford University Press.