To See the Real Story in Brazil, Look at Who Is Being Installed as President — and Finance Chiefs

22 Apr 2016 – It’s not easy for outsiders to sort through all the competing claims about Brazil’s political crisis and the ongoing effort to oust its president, Dilma Rousseff, who won re-election a mere 18 months ago with 54 million votes. But the most important means for understanding the truly anti-democratic nature of what’s taking place is to look at the person whom Brazilian oligarchs and their media organs are trying to install as president: the corruption-tainted, deeply unpopular, oligarch-serving Vice President Michel Temer (below). Doing so shines a bright light on what’s really going on, and why the world should be deeply disturbed.

The New York Times’s Brazil bureau chief, Simon Romero, interviewed Temer this week, and this is how his excellent article begins:

RIO DE JANEIRO — One recent poll found that only 2 percent of Brazilians would vote for him. He is under scrutiny over testimony linking him to a colossal graft scandal. And a high court justice ruled that Congress should consider impeachment proceedings against him.

Michel Temer, Brazil’s vice president, is preparing to take the helm of Brazil next month if the Senate decides to put President Dilma Rousseff on trial. 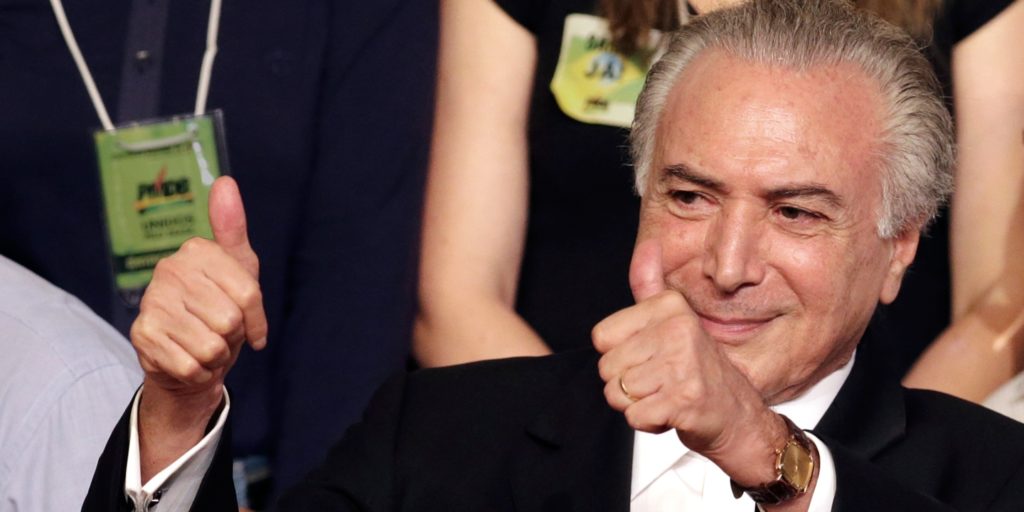 How can anyone rational believe that anti-corruption anger is driving the elite effort to remove Dilma when they are now installing someone as president who is accused of corruption far more serious than she is? It’s an obvious farce. But there’s something even worse. 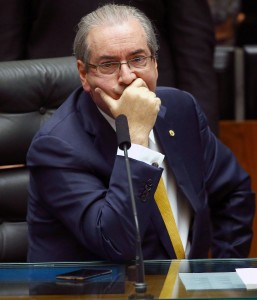 The person who is third in line to the presidency, right behind Temer, has been exposed as shamelessly corrupt: the evangelical zealot and House speaker Eduardo Cunha. He’s the one who spearheaded the impeachment proceedings even though he got caught last year squirreling away millions of dollars in bribes in Swiss bank accounts, after having lied to Congress when falsely denying that he had any accounts in foreign banks. When Romero asked Temer about his posture toward Cunha once he takes power, this is how Temer responded:

Mr. Temer defended himself and top allies who are under a cloud of accusations in the scheme. He expressed support for Eduardo Cunha, the scandal-plagued speaker of the lower house who is leading the impeachment effort in Congress, saying he would not ask Mr. Cunha to resign. Mr. Cunha will be the next in line for the presidency if Mr. Temer takes over.

By itself, this demonstrates the massive scam taking place here. As my partner, David Miranda, wrote this morning in his Guardian op-ed: “It has now become clear that corruption is not the cause of the effort to oust Brazil’s twice-elected president; rather, corruption is merely the pretext.” In response, Brazil’s media elites will claim (as Temer did) that once Dilma is impeached, then the other corrupt politicians will most certainly be held accountable, but they know this is false, and Temer’s shocking support for Cunha makes that clear. Indeed, press reports show that Temer is planning to install as attorney general — the key government contact for the corruption investigation — a politician specifically urged for that position by Cunha. As Miranda’s op-ed explains, “The real plan behind Rousseff’s impeachment is to put an end to the ongoing investigation, thus protecting corruption, not punishing it.”

But there’s one more vital motive driving all of this. Look at who is going to take over Brazil’s economy and finances once Dilma’s election victory is nullified. Two weeks ago, Reuters reported that Temer’s leading choice to run the central bank is the chair of Goldman Sachs in Brazil, Paulo Leme. Today, Reuters reported that “Murilo Portugal, the head of Brazil’s most powerful banking industry lobby” — and a long-time IMF official — “has emerged as a strong candidate to become finance minister if Temer takes power.” Temer also vowed that he would embrace austerity for Brazil’s already-suffering population: He “intends to downsize the government” and “slash spending.” 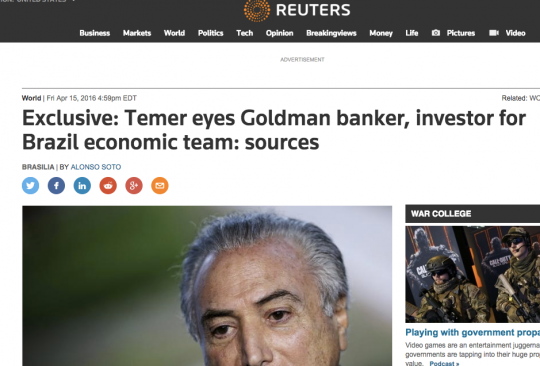 In an earning calls last Friday with JP Morgan, the celebratory CEO of Banco Latinoamericano de Comercio Exterior SA, Rubens Amaral, explicitly described Dilma’s impeachment as “one of the first steps to normalization in Brazil,” and said that if Temer’s new government implements the “structural reforms” that the financial community desires, then “definitely there will be opportunities.” News of Temer’s preferred appointees strongly suggests Mr. Amaral — and his fellow plutocrats — will be pleased.

Meanwhile, the dominant Brazilian media organs of Globo, Abril (Veja), Estadão — which Miranda’s op-ed discusses at length — are virtually unified in support of impeachment, as in No Dissent Allowed, and have been inciting the street protests from the start. Why is that revealing? Reporters Without Borders just yesterday released its 2016 Press Freedom Rankings, and ranked Brazil 103 in the world because of violence against journalists but also because of this key fact: “Media ownership continues to be very concentrated, especially in the hands of big industrial families that are often close to the political class.” Is it not crystal clear what’s going on here?

So to summarize: Brazilian financial and media elites are pretending that corruption is the reason for removing the twice-elected president of the country as they conspire to install and empower the country’s most corrupted political figures. Brazilian oligarchs will have succeeded in removing from power a moderately left-wing government that won four straight elections in the name of representing the country’s poor, and are literally handing control over the Brazilian economy (the world’s seventh largest) to Goldman Sachs and bank industry lobbyists.

This fraud being perpetrated here is as blatant as it is devastating. But it’s the same pattern that has been repeatedly seen around the world, particularly in Latin America, when a tiny elite wages a self-protective, self-serving war on the fundamentals of democracy. Brazil, the world’s fifth most populous country, has been an inspiring example of how a young democracy can mature and thrive. But now, those democratic institutions and principles are being fully assaulted by the very same financial and media factions that suppressed democracy and imposed tyranny in that country for decades.