7 Apr 2016 – While neither Vladimir Putin nor any members of his family were mentioned in the Panama Papers leak [more like a hack], most Western media chose to break the story with the Russian president’s photo. Former US and UK intelligence officers say this is no coincidence. 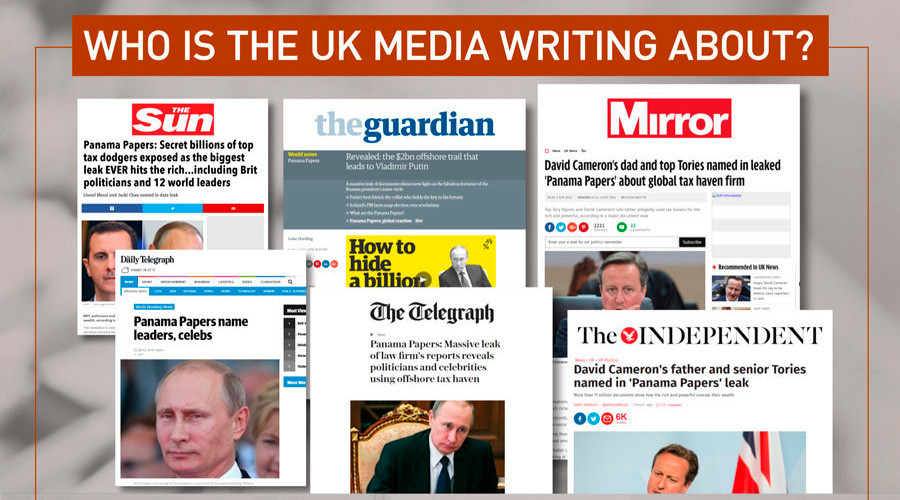 Ray McGovern, a former CIA officer, said that the fact that the Western media has been using Putin as the “face” of the Panama Papers leak can be easily explained by looking at the people and organizations behind these news outlets.

“Everyone in corporate press is controlled by corporations that profit on wars and have an interest in creating tensions – all these people in the Western press, like the Guardian, are blackening Putin [for being] a designated villain here. Curiously, his name is not in these documents,” Ray says.

He also claims that the way the story was presented demonstrates “a complete lack of standards on the part of the Western media.” McGovern believes it was “a major mistake made by the leaker” to hand the documents over to the corporate media, instead of leaking them to trusted independent journalists.

“It seems the Western press has lost all sense of fairness. This would be humorous if it weren’t so serious. It seems even if Vladimir Putin was seen walking on water, the report in the Western media would come out as ‘Putin doesn’t know how to swim,’” McGovern said.

Annie Machon, a former MI5 agent, advised being cautious when reading news in the MSM, as there is always an agenda behind what is presented in those publications.

“It’s always worth taking a step back from whatever you read in the media – and seeing who’s funding this, what are the corporate interests behind what is being published in this particular outlet.”

“RT gets slated for that, and I think most western outlets could also be slated for the same reasons. The BBC is state funded, Fox News is corporate funded – there is always going to be some sort of agenda behind any editorial decisions on any medium there,” she stressed.

Machon also suggests that the journalists who broke the story concerning the Panama Papers leaks lost control of the story as they tried to maximize its impact to make it “breaking.”

“The Guardian still has this ‘how to hide your billions offshore’ and a video with Putin and his family.  I understand that journalistic organizations want to maximize the impact – they should – but you can maximize it and then minimize it by dragging it up too long. It’s interesting that the press seems to have a certain agenda and yet the [primary] interest is the corruption of their leaders.”

Meanwhile, both experts question the speed with which the information contained in the papers is being released, calling on the news outlets to make all of the information public instead of holding on to it, creating a mystery where there shouldn’t be one.

“There is an obligation for the people who hold these documents to release the full text. I would caution people that the main points are not out [yet] – all we see so far is what the corporate media selected for us to see, while certainly [there are] people in the US who do not want [everything] released until after the presidential primaries,” McGovern stressed.

According to Machon, now that the media has “made a splash,” it must put all the information out for everyone to research, which she says is what “crowdsourcing journalism, crowdsourcing democracy” is really about and what is, in her opinion, what the global community needs.