Bayer and Monsanto: A Marriage Made in Hell 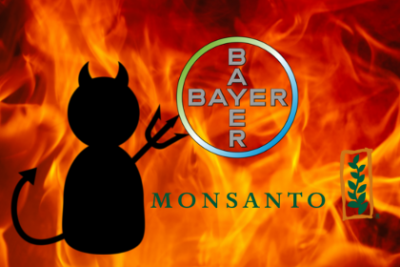 24 May 2016 – The two multinationals that teamed up during the Vietnam War to poison millions of people with its Agent Orange herbicide—St. Louis, Mo.-based Monsanto and Germany’s Bayer AG—are looking to become one.

Bayer has announced a bid  to buy Monsanto in a deal that would expand Bayer’s GMO and pesticide holdings and add drugs to Monsanto’s global portfolio. Monsanto has rejected  the latest bid, but the two are still in talks.

If Monsanto, perhaps the most hated GMO company in the world, joins hands with Bayer, one of the most hated Big Pharma corporations on Earth (whose evil deeds date back to World War I and the Nazi era), the newly formed seed-pesticide-drug behemoth would have combined annual sales of $67 billion.

That’s a staggering figure. But here’s another, even more alarming: Combined, the new mega-chemical/seed company would control 29 percent of the world’s seed market and 24 percent of the pesticide market.

The Bayer-Monsanto merger is the third recent proposed consolidation in the agriculture markets in just months, following on the heels of proposed mergers between chemical and agritoxics titans Dow and DuPont, and ChemChina and Syngenta.

“All of a sudden we have three major transactions at the same time,” Matt Arnold, an Edward Jones analyst, told the News Journal. “One would think that would prompt regulators to really dial up the scrutiny and think long and hard about whether that much consolidation is in the best interest of farmers and consumers.”

Already shareholders have spoken out, terming the move “arrogant empire-building,” reported Reuters. Shareholders also worry that the takeover would dilute Bayer’s core drug business currently flush with sales of its blood-thinner Xarelto and Eylea, a drug to treat blindness.

As noted, this is not the first time Bayer and Monsanto will have teamed up, if the deal goes through. “During the Vietnam war, Bayer was involved in the development of Agent Orange production….carried out at the firm Mobay, founded jointly by Bayer and Monsanto,” says Coalition Against Bayer Dangers. The defoliant herbicide Agent Orange was sprayed over millions of acres in Vietnam for over a decade in “Operation Ranch Hand,” despite numerous scientific studies and thousands, later millions of medical cases linking the toxic chemical to birth defects and stillbirths in animals and humans. 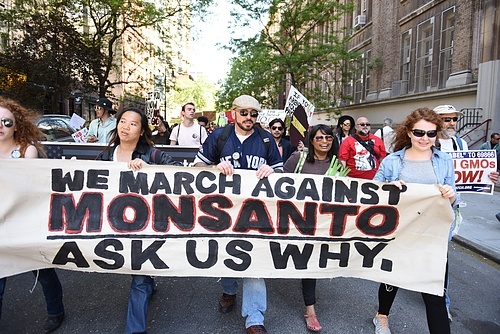 Bayer, a History of Unsafe Drugs

Bayer and Monsanto both sell controversial toxic agricultural chemicals and GMO seeds. But if Bayer’s bid to take over Monsanto goes through, it would mark Monsanto’s first entry into Big Pharma.

Last year, Bayer was named the ninth largest drug company in the world on the basis of its yearly revenue of $25.47 billion. The drug giant, though, has been beset with drug safety scandals, including deaths, for at least three decades. Here are just a few of the scandals that made the news.

In the 1980s, Bayer sold Factor VIII concentrate, a blood-clotting medicine acquired from Cutter Laboratories in 1978. Though Factor VIII carried a high risk of transmitting AIDS and Bayer knew, Bayer continued to sell the drug in Asia and Latin America while selling a new, safer product in the West.

In Hong Kong and Taiwan alone, more than 100 hemophiliacs got H.I.V. and “many have since died,” reported the New York Times. Cutter’s “financial investment in the product was considered too high to destroy the inventory,” said William Heisel of the Center for Health Reporting. “Cutter continued to sell the contaminated AHF to markets willing to accept it, including overseas markets in Asia and Latin America, without the recommended precaution of heat treating the product to eliminate the risk.”

In 2001, Bayer withdrew its lucrative new statin drug Baycol because more than 50 people had died and more than six million patients were at risk from the deadly side effects of rapidly dissolving of muscle tissue. Bayer removed the drug from pharmacy shelves in the U.S., Europe and Japan, and U.S. and German lawyers announced that they are planning an amended class-action lawsuit in the U.S. that would allow European victims to seek damages.

As deaths grew, Bayer stuck to its story “that there is currently no proof that the drug is the cause of the deaths” and assured shareholders that “Our sales this year will increase even though Baycol will now be absent.” Recently, Bayer was sentenced to pay damages to Baycol victims in in Argentina and Italy. “Internal documents show that Bayer’s management was aware of the serious health risk for patients and even ignored warnings from within the company.”

Bayer’s Yaz birth control pills promised to clear up acne and treat severe PMS in addition to preventing pregnancy. But soon after the Yaz launch in 2006, there were reports of associated blood clots, gall bladder disease, heart attacks and even strokes. The Bayer birth control pills contained drospirenone, a drug that was never before marketed in the U.S. and likely caused the heart problems through elevated potassium, and a change in acid balance of the blood.

TV ads for Yaz in 2008 were so misleading, the U.S. Food & Drug Administration (FDA), in a rare move, ordered Bayer to run correction ads. Thousands of injuries and approximately 100 deaths were linked to Yaz in law filings that followed.

In 2012, the New York Times reported on a class of new anti-clotting drugs which have no antidote and can cause alarming bleeding deaths. Xarelto is one of them. Even as 379 deaths have been linked to Xarelto, there are reports of hidden and falsified data and faulty technology that helped win the controversial drug FDA approval. Trials were conducted by Duke’s Robert Califf, who later became the new FDA Commissioner. No conflict of interest there.

A 2015 Bayer brochure, coinciding with public awareness of antibiotic abuse in livestock, says Bayer Animal Health “objects” to “routine prophylactic use in healthy animals” of fluoroquinolones, a type of antibiotic.

Yet it was just such “prophylactic use” that got Bayer’s fluoroquinolone Baytril blocked by the FDA a decade ago.  The FDA said  the routine use of Baytril in chickens “has made it difficult for doctors to treat human patients who have food poisoning.” Union of Concerned Scientists called the decision a “big victory for public health.” The FDA Commissioner at the time, Lester Crawford, remarked that Baytril “has not been shown to be safe for use in poultry.” The FDA continues to struggle against the powerful lobbying of drug companies selling livestock antibiotics, often by the ton.

Many people have heard rumors about Bayer’s roles in WWI and WWII. Sadly, they are true and sometimes worse than have been reported. “Carl Duisberg, the Bayer General Director for decades, was personally involved in the development of poison gas such as ‘Mustard Gas’ in World War I and pushed for its use on the front–contrary to international law,” reports Coalition against Bayer Dangers. Duisberg demanded the deportation of tens of thousands of Belgian forced laborers, according to the Coalition, and “strongly supported the merging of the German chemical industry to create the Ig Farben” implicated in Nazi atrocities.

“The Ig Farben cartel was crucial to the Nazi war effort by supplying synthetic fuel, rubber, and other chemicals,” reports Natural News. The cartel also manufactured Zyklon-B, the nerve gas used to kill millions at the concentration camps of Auschwitz, Birkenau and elsewhere. Later known as the Devil’s Chemists, Ig Farben used unwilling inmates of the concentration camps as slave laborers and guinea pigs to test chemicals, pharmaceuticals, and vaccines. Tens of thousands died, and those who became too ill to be of any use were murdered in the gas chambers, according to a Natural News report.

It is hard to believe a company linked to the Holocaust, including grisly human experiments conducted on concentration camp victims, would be thriving in the pharmaceutical, agrochemical and GMO sectors. But it’s true, as evidenced by this correspondence between an Auschwitz camp commander and Bayer Leverkusen, which cites the “sale” of 150 female prisoners for experiments:

With a view to the planned experiments with a new sleep-inducing drug we would appreciate it if you could place a number of prisoners at our disposal (…)” – “We confirm your response, but consider the price of 200 RM per woman to be too high. We propose to pay no more than 170 RM per woman. If this is acceptable to you, the women will be placed in our possession. We need some 150 women (…)” – “We confirm your approval of the agreement. Please prepare for us 150 women in the best health possible (…)” – “Received the order for 150 women. Despite their macerated condition they were considered satisfactory. We will keep you informed of the developments regarding the experiments (…)” – “The experiments were performed. All test persons died. We will contact you shortly about a new shipment (…)”

From Chemical Warfare to “Crop Science”

Bayer is in agrochemicals and GMOs as deeply as Monsanto, the company it seeks to buy. In 2008, the German Coalition against Bayer brought a charge against the Bayer Board of Management with the Public Prosecutor in Freiburg (south-western Germany) accusing Bayer of contributing to the mass death of bees all over the world through its aggressive pesticide marketing. Since then, the bee debacle has only grown worse, with thousands of hives collapsing after poisoning by the pesticide clothianidin, producing a worldwide crisis.

Since 1991, Bayer has been producing the insecticide Imidacloprid, one of the world’s best-selling insecticides. Imidacloprid is used to pre-treat genetically engineered corn, sunflower and rapeseed (canola) seeds, despite evidence seeds with insecticides is ineffective. Imidacloprid was one of Bayer´s top pesticides, exported to more than 120 countries. When its patent expired, Bayer brought a similarly functioning successor product, Clothianidin, onto the market in 2003. Both substances are systemic chemicals that work their way from the seed through the plant. The substances also get into the pollen and the nectar and can damage beneficial insects such as bees.

In 2006, the Washington Post reported that Bayer’s GMO rice, LLRICE 601 rice, endowed with bacterial DNA that makes rice plants resistant to a weed killer made by the agricultural giant Aventis, was spreading out of control. U.S. commercial supplies of long-grain rice had become inadvertently contaminated with the rice not approved for human consumption, said Agriculture Secretary Mike Johanns.

The following year, Bayer admitted it was unable to control the spread of its genetically-engineered organisms despite “the best practices [to stop contamination],” demonstrating once again that all outdoors field trials or commercial growing of GMO crops must be stopped.

Europe has been way ahead of the U.S. in acknowledging the dangers and banning GMOs and dangerous pesticides.

While a Bayer-Monsanto deal (like a DuPont-Dow deal or ChemChina-Syngenta deal) certainly threatens the world food supply with domination by GMOs and destructive agrochemicals, there may be an underreported bright side: Industries that are doing well generally spin off; industries that are performing poorly generally merge and consolidate.

Recent reports suggest the stock of large agricultural, biotech and seed companies, including Monsanto, is foundering, –a likely reflection of the growing, world-wide rejection of their products.  Moreover, even though the long-awaited, industry-friendly National Academies of Sciences, Engineering and Medicine report did not find human “dangers” in eating GMOs, it also definitively did not find they produced greater crop yields. Wait—wasn’t that the justification given for creating GMO crops?

Thanks in large part to the global anti-GMO and Millions Against Monsanto movement, the Biotech Tech Bully from St. Louis is on the ropes. By changing its name, Monsanto hopes we’ll forget its evil deeds.

Not a chance, On October 14-16, merged or not with Bayer, the OCA and the global grassroots will expose Monsanto’s crimes against humanity and the environment at the Monsanto Tribunal, a citizens’ tribunal which will take place in The Hague, Netherlands.

Perhaps it’s time to put Bayer and Big Pharma on trial as well and build an even larger global united front: Billions Against Bayer-Monsanto.

Martha Rosenberg is a contributing writer to Organic Consumers Association.

Ronnie Cummins is international director of the Organic Consumers Association.