Nakba Survivors Share Their Stories of Loss and Hope

In 1948, Zionist militias attacked Palestinian cities and villages and destroyed more than 530 Palestinian villages. About 13,000 Palestinians were killed and more than 750,000 were expelled from their homes, becoming refugees.

Here Palestinians share their stories of displacement, loss and hope to return to their villages. 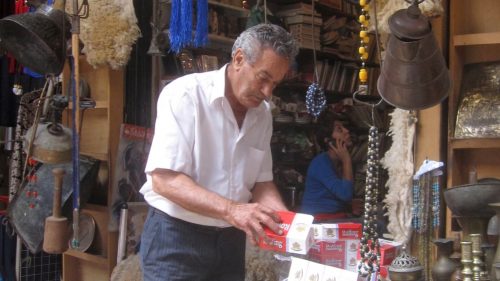 19 May 2016 – Ameen Muhammad Ali’s tiny store – little more than an alcove – is easily missed amid the bustle of the main thoroughfare of the market in Nazareth’s Old City.

His shop is a time capsule, transporting visitors to a period before the arrival of the cheap kitchenware, women’s fashions and electronics stocked by neighbouring traders.

Hanging outside from the awning are traditional sheepskin rugs, battered copper cauldrons and faded brass coffee pots. In a rusting bowl are hundreds of old coins of a currency no longer recognised: The Palestinian lira. Muhammad Ali, better known as Abu Arab, cherishes these relics as keenly as he does his memories of a home and way of life he lost 68 years ago, when he was 13.

“I am sure one day I will return to Saffuriya,” he says of a Palestinian village only two kilometres outside Nazareth that Israel destroyed during the Nakba in 1948. He pauses, then chuckles as he injects a note of realism: “If not me, then my son – and if not my son, then my grandson.”

Unlike the majority of refugees from the 1948 war, 81-year-old Abu Arab lives near his former village, in a neighbourhood of Nazareth whose residents are all refugees from Saffuriya or their descendants.

Today, he is an Israeli citizen, but has no more rights to return to his village than his relatives in the camps of Lebanon. In Israeli legal parlance, he says, drawing heavily on one of the cigarettes he always has to hand, he is classified as a “present absentee” – present in Israel but absent from his property.

Over the village lands, Israel has built an exclusively Jewish community and given it the similar, Hebraicised name of Tzipori. Where the houses once stood is a pine forest planted by the Jewish National Fund.

How does he feel about Israel? “We are not against Jews. We are just against the ideology of Zionism. [Jewish] Israelis can be partners if they can overcome their brainwashing and are ready to accept a resolution that is fair to everyone.”

Abu Arab’s infectious optimism is eclipsed only when he recalls the events of July 1948, as Saffuriya was attacked. His face grows sombre, his eyes distant. “They bombed us from the air just as we were breaking the fast for Ramadan – they knew we would all be in our homes.”

His parents fled with the children – three brothers, including the late poet Taha Muhammad Ali, and a 12-year-old sister – into the dense undergrowth nearby. In the morning, as Israeli troops occupied the village, they were forced northwards towards Lebanon.

Shortly after they arrived in a refugee camp there, his sister died from heat exhaustion. “My mother would sit by her grave every day, lost in grief.”

Finally, his father decided they must make the dangerous journey back. “It was very frightening – we never knew if we were about to stumble into the Israeli army.” At the journey’s end, they found the village gone. The area had been fenced off and declared a closed military zone – and anyone entering risked being shot.

“We had nothing. Everything had been taken from us,” he says, his large hands that have animated his memories finally falling silently by his sides. The family hid in a friend’s house in Nazareth, and slowly the three brothers started to rebuild their lives, selling cakes from a street trolley. When Abu Arab had saved enough, he bought his current shop.

There has been a gentle, melancholy tone to these recollections, echoing the poetry of his celebrated brother Taha. But as his focus returns to the present, his voice grows steelier. “All the refugees have the right to return – and no one can strip us of that right.”

The events of 1948 must not be erased from the collective memory, he adds. “Israel does its best to silence us, banning talk about the Nakba from schools so the younger generations will not know what happened.”

In that spirit, he helped to found the main body representing the internal refugees, ADRID – the Association for the Rights of the Internally Displaced, which for the past 30 years has organised an annual Nakba March on Israel’s Independence Day.

On Friday thousands attended a procession in the northern Negev to the destroyed village of Wadi Zubala. 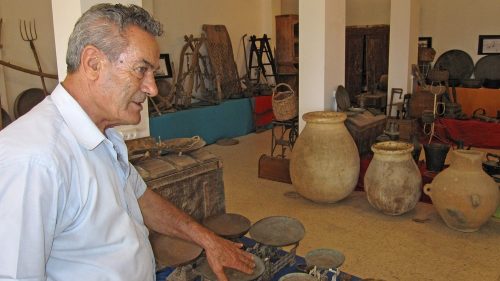 Abu Arab is also active in the Saffuriya Cultural Association. Over the years he has taken items from his shop to stock a museum commemorating the extinguished way of life in the hundreds of villages like Saffuriya, wiped off the map in 1948.

“The early Zionists justified the creation of a Jewish state in Palestine, saying this was a land without people,” he notes. “The museum is the proof that the Palestinians did exist – and we have a culture and heritage that cannot be erased.”

For accounts from other survivors, by different writers, click here.