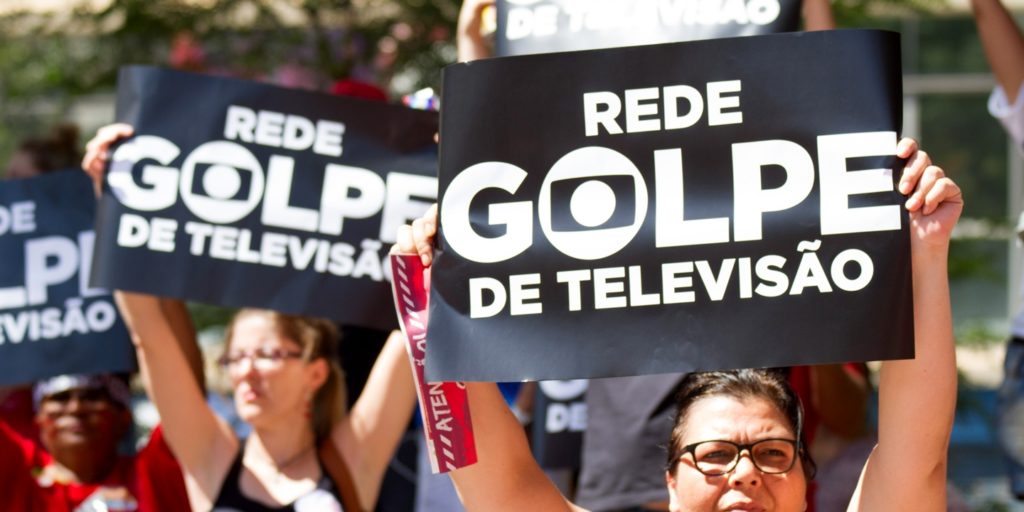 29 Apr 2016 – Ten days ago, the photographer Mauricio Lima was feted by Brazil’s large corporate media when he won the 2016 Pulitzer Prize for Breaking News Photography, the first Brazilian ever to win the award. Lima shared the Pulitzer with fellow New York Times photographers Sergey Ponomarev, Tyler Hicks and Daniel Etter, with whom he worked to produce a series of stunning photographs documenting the journey of a Syrian refugee family, the Majids, as they traveled from Greece to Sweden to seek asylum. The year before, Lima, along with two colleagues, was named a Finalist in the same Pulitzer category for his work in The New York Times showing the devastation from the war in Ukraine. Last week, one columnist for O Globo quoted Joseph Pulitzer’s definition of journalism’s purpose and gushed that “there is no better definition to describe the work of Maurício Lima.”

But last night, Lima launched a direct, unflinching attack on the same Brazilian media outlets which, just days ago, were hailing him as a hero. Lima, along with the same three NYT colleagues, was named the winner by the Overseas Press Club of the John Faber award for “best photographic reporting from abroad in newspapers or news services.”

In a moving 3-minute speech, Lima accepted the award on behalf of his colleagues, and dedicated the prize to “every single refugee I came across last year, people oppressed by wars and social injustice.” He paid particular tribute to the Majid family, who “accepted for 29 days a stranger with a camera as part of their family.” But he devoted the last part of his speech to events in his home country, Brazil.

“I consider it very important to say a few words – I’m from Brazil,” he began, adding: “I’m pretty sure everyone here knows what’s going on in Brazil at the moment.” He continued: “I would like to express my support for freedom of speech and democracy — which is exactly what’s not going on in Brazil at the moment.” Punctuating his point was this final, simple sentence: “So I’m against the coup.”

Most notably, the Pulitzer winner contrasted the “very high level professionals in journalism here” – those gathered at the ceremony in New York – with the media outlets in Brazil openly inciting street protests and agitating for the exit of the elected president. To underscore the point, he held up a sign that read “Golpe: Nunca Mais” – “Coup: Never Again” – with the “o” in “Golpe” replaced by the logo of Globo, Brazil’s largest and most influential media outlet that spent 20 years cheering the 1964 coup and military dictatorship that followed, and which has spent the last year flagrantly using its multiple media properties to propagandize in favor of Dilma’s impeachment. 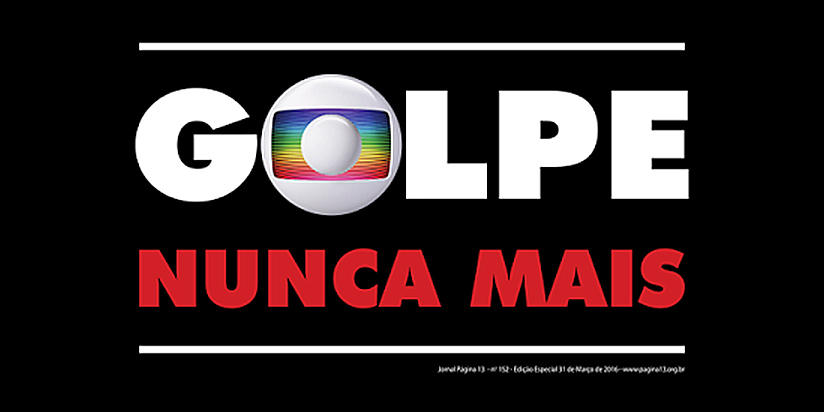 Brazil’s media has completely lost control of the narrative internationally, but also increasingly within Brazil. Their sleazy plan to install as president the corruption-tainted, deeply unpopular, oligarch-serving Vice President Michel Temer  – who just this week, in a indescribably Orwellian manner, called proposals for “new elections” a “coup” – is becoming untenable. Prominent, universally respected international figures are becoming increasingly vocal about the dangerous assault on democracy; the latest is the Argentine Adolfo Pérez Esquivel, who won the 1980 Nobel Peace Prize for his courageous work against his country’s military dictatorship and this week said during a visit to Brazil: “It’s very clear that what’s being mounted here is a concealed coup d’état, which we call a bloodless coup,” adding: “It would be a serious setback for the continent. I’m a survivor from the days of the [military] dictatorship [in Argentina]. To strengthen democratic institutions cost us a great deal. And here they’re under attack.”

Given his standing in international journalism, Lima’s blunt denunciation of impeachment and the distinctly non-journalistic role of Globo, is certain to accelerate this process. You can watch his speech here: