The Joke of U.S. Justice and “Accountability” When They Bomb a Hospital

29 Apr 2016 – Ever since the U.S. last October bombed a hospital run by Doctors Without Borders (MSF) in Kunduz, Afghanistan, the U.S. vehemently denied guilt while acting exactly like a guilty party would. First, it changed its story repeatedly. Then, it blocked every effort – including repeated demands from MSF – to have an independent investigation determine what really happened. As May Jeong documented in a richly reported story for The Intercept yesterday, the Afghan government – rather than denying that the hospital was targeted – instead repeatedly claimed that doing so was justified; moreover, they were sympathetic to calls for an independent investigation, which the U.S. blocked. What is beyond dispute, as Jeong wrote, is that the “211 shells that were fired . . . were felt by the 42 men, women, and children who were killed.” MSF insisted the bombing was “deliberate,” and ample evidence supports that charge.

Despite all this, the U.S. military is about to release a report that, so predictably, exonerates itself from all guilt; it was, of course, all just a terribly tragic mistake. Worse, reports The Los Angeles Times‘ W.J. Hennigan, “no one will face criminal charges.” Instead, this is the “justice” being meted out to those responsible:

One officer was suspended from command and ordered out of Afghanistan. The others were given lesser punishments: Six were sent to counseling, seven were issued letters of reprimand, and two were ordered to retraining courses. 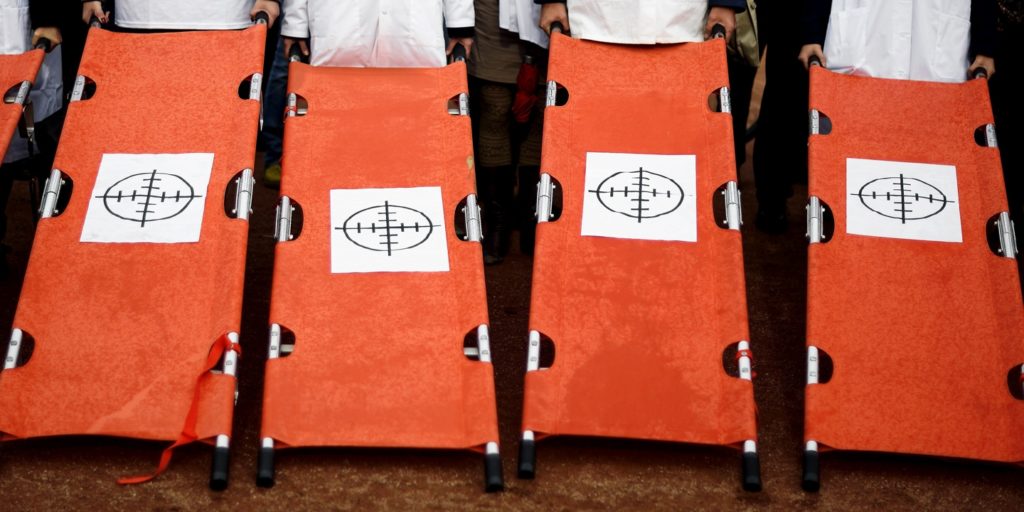 MSF continues to insist that the attack was a “war crime” and must be investigated by an independent tribunal under the Geneva Conventions. In a statement this week, Amnesty International said that it has “serious concerns about the Department of Defense’s questionable track record of policing itself.” The LA Times story notes that Physicians for Human Rights said in a letter to the White House that “the gravity of harm caused by the reported failures to follow protocol in Kunduz appears to constitute gross negligence that warrants active pursuit of criminal liability.”

But none of that matters. The only law to which the U.S. government is subject is its own interests. U.S. officials scoffed at global demands for a real investigation into what took place here, and then doled out “punishments” of counseling, training classes, and letters of reprimand for those responsible for this carnage. That’s almost a worse insult, a more extreme expression of self-exoneration and indifference, than no sanctions at all. But that’s par for the course in a country that has granted full-scale legal immunity for those who perpetrated the most egregious crimes: from the systemic fraud that caused the 2008 financial crisis to the worldwide regime of torture the U.S. government officially implemented.

Yesterday in Syria, an MSF-run hospital was targeted with an airstrike, almost certainly deliberately, by what was very likely the Syrian government or the Russians, killing at least 50 patients and doctors, including one of the last pediatricians in Aleppo. On behalf of the U.S. government, Secretary of State John Kerry pronounced: “We are outraged by yesterday’s airstrikes in Aleppo on the al Quds hospital supported by both Doctors Without Borders and the International Committee of the Red Cross, which killed dozens of people, including children, patients and medical personnel.” On the list of those with even minimal credibility to denounce that horrific airstrike, Kerry and his fellow American officials do not appear.