The Ugly Truth Behind the Greek Bailout 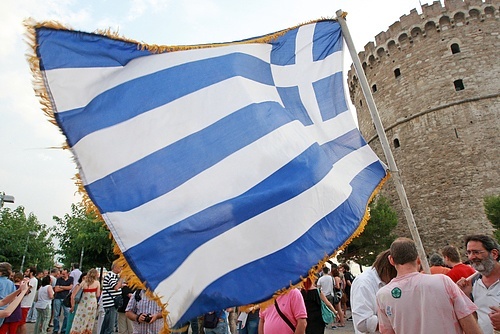 10 May 2016 – Christine Lagarde, the Queen of Troika and the Head Honcho of the IMF, on May 6th, threatened to pull the IMF out of the Greek rescue plan, with a straight face, calling it a “rescue plan.” Oh, please!

Yet, it is extremely doubtful the IMF would ever entirely pull out since the plan really bails out its own constituency of banks at an unfathomable expense to the Greek people.

Meantime in Greece, transportation and civic services throughout the country grind to a screeching halt, full stop, as the people hit the streets.

Queen Christine’s backroom stratagem, described in a WikiLeaks’ leaked confidential letter exclusive to Troika members, preceded the three-day nationwide strike in very strong protest against more and more, infinitely more, austerity measures burying the Greek people as quid pro quo for bailout money, which almost exclusively (95%) serves to service creditors. This is insanity of the highest order. How can Greeks at all accede to a measly 5%?

Anyway, the Troika bailout ruse is finally hitting the proverbial “ you can’t squeeze blood out of a turnip” stage, which is when citizens go berserk, ballistic, fighting mad, screaming, kicking and scratching, all kinds of turmoil and hubbub, maybe carnage. Who knows?

The ugly sequence of events started on May 6th when Greece’s shipping, public transport, and civil service departments included the days Friday and Saturday to their planned nationwide strike for Sunday, May 8th, the day when Greece’s Parliament votes on tax changes, as imposed by Troika, meaning higher taxes and lower pensions. Robotically, this is all the Brussels bureaucrats know.

“Greece’s largest labour union, the private sector GSEE, said the changes, were the ‘last nail on [sic] the coffin’ for workers and pensioners. A spokesman said: ‘They are trying to prove to the Eurogroup that they are good students but they are destroying Greece’s social security system,” Greece Hit by General Strike Over Pension and Tax Change, BBC News, May 6, 2016.

“’They are the worst so far,’ said Odysseus Trivalas, president of the public sector union ADEDY. ‘At some point, Greeks won’t be able to take anymore and there will be a social explosion,” IMF Threatens to Pull Out of Greek Rescue, The Guardian, May 6, 2016.

Hark! The Greek bailout is the epitome, the essence of neoliberal practices, i.e., slash and burn social welfare, grind people into the ground, hammer‘em, to save capital. But, then again, that’s how the neoliberal brand of capitalism functions the world over, and it sucks!

The Greek rescue plan, in real time, is equivalent to stepping inside the pages of The Shock Doctrine, similar to The Truman Show, experiencing life in a reality TV program.

The Shock Doctrine–The Rise of Disaster Capitalism, the title of Naomi Klein’s wonderful 2008 New York Times’ bestseller says it all, laying out for everybody the hideous details behind capitalism’s newest wrinkle circa 1980s, neoliberalism, a destructive heat-seeking-missile aimed at unions, social welfare programs, and governmental regulations, let the free market reign supreme!

Greece- “The Mouse That Roared”

Assuming negotiations break apart, which could happen, a Grexit has broad-reaching negative implications for neoliberalism’s unrelenting penchant for slashing and burning and stomping on social welfare programs.

Forget the fact that Greece is only 2% of Eurozone GDP. Regardless, a pushback against Troika-imposed austerity may ripple throughout the EU, as other anti-austerity parties, like Podemos in Spain, closely follows.

Not only is the sanctity of Troika’s unseemly anti-austerity measures at stake. Additionally, an extremist threat, a fierce anti-EU stance by right-wingers like France’s National Front and Britain’s Ukip will feast upon a broken Greek/EU relationship, strengthening their argument that European integration is a passing fad doomed to utter failure.

Meanwhile, adding kindling to the probability of a raging brush fire, Vladimir Putin stands in the shadows with sharpened fangs deliciously smacking lips over the juicy prospect of a Russian/Greece relief package, walloping NATO and the U.S. with the fallen sword of Damocles.

Clearly, the Troika’s brutal austerity measures, designed exclusively to protect creditors, could backfire, flaring up like roman candles on the 4th, perhaps dismantling the EU, a crumbling house of cards.

“The Greek people have been living through hell during the last six years, and unfortunately they trusted that Tsipras [PM] would put an end to the extreme austerity measures, which are combined with a total undemocratic regime. Unfortunately, instead of putting an end, he put his signature to a third memorandum, which is even worse than the previous two… People are back on the streets protesting for their rights and dignity because right now they’re being asked to pay taxes which amount to almost the totality of their revenue. They’re asked to give up their homes… They’re asked to surrender public property, which is privatized at very, very low prices. And, they’re also asked to give up democracy” (Zoe Konstantopoulou (40), lawyer and former, youngest ever, Speaker of Hellenic Parliament).

Some 95 percent of the 220 billion euros disbursed to Greece since the start of the financial crisis as loans from the bailout mechanism has been directed toward saving the European banks. In other words, about 210 billion euros was eventually channeled to the eurozone credit sector while just 5 percent ended up in state coffers, according to a very recent study by the European School of Management and Technology (ESMT) in Berlin.

“Europe and the International Monetary Fund have in previous years mainly saved the banks and other private creditors,” concluded the report, published in German newspaper Handelsblatt. According to ESMT director Jorg Rocholl, “the bailout packages mainly saved the European banks,” (Jan Hildebrand and Thomas Sigmund, Study: Bailouts for Banks, Not Greeks, Handelsblatt Global Edition, May 4, 2016.)

Economists studied each loan separately to establish where the money ended up, and concluded that just 9.7 billion euros, or less than 5 percent, went to the Greek budget for the benefit of citizens.

Robert Hunziker lives in Los Angeles and can be reached at roberthunziker@icloud.com