Their Next Act: The Ringling Brothers’ Elephants Are Retiring

—And Moving to Florida to Contribute to Cancer Research 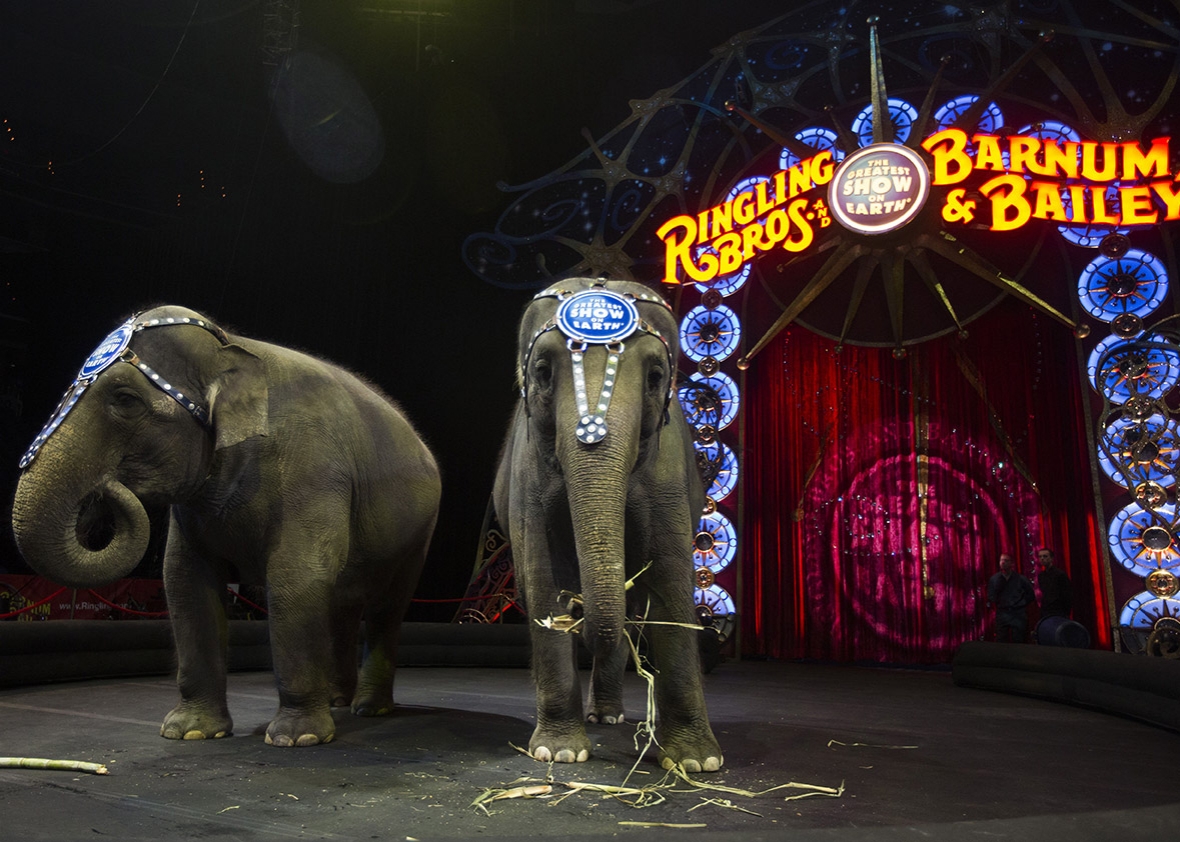 Elephants Bonnie and Kelly Ann eat sugar cane before a Ringling Bros. and Barnum & Bailey Circus performance in Washington, D.C., on March 19, 2015. The animals will no longer be part of the circus.
Andrew Caballero-Reynolds/AFP/Getty Images

This week, the ladies are traveling south in custom-built trucks to Central Florida, where they will live out their days in a retirement community. They were showgirls in their prime, but some people don’t want their kind of show to go on.

Unlike many of Florida’s other retirees, Juliet, Sara and Karen are not heading south in search of warmer weather and canasta partners. They are three of the last 11 Asian elephants to tour with Ringling Brothers and Barnum & Bailey Circus. In its 145th year on the road, the “Greatest Show on Earth” is taking its biggest attraction—the symbol of the circus since P.T. Barnum, that quintessential American showman, brought the famed captive Jumbo to the States—off the road for good, finally capitulating to years of pressure from animal rights activists. This past Sunday marked the elephants’ final performances, with six performing in Providence, Rhode Island, and five more taking their last bows in Wilkes-Barre, Pennsylvania.

At the Dunkin’ Donuts Center in Providence, the elephants performed their customary “Dance Party” one last time, rhythmically lifting their front feet and bobbing their massive heads while perched on their tiny pedestals. But the dancing seemed perfunctory, a little half-hearted. Maybe the elephants, who have been performing this dance three times a day on every tour stop for years, were bored of the routine. Maybe they were feeling verklempt, knowing these were their final appearances. Or maybe it’s just tough to tell whether an elephant is enjoying herself.

Who knows? The animal rights activists who have been calling for the abolition of circus animal acts can’t divine what the elephants are thinking. Nor can their handlers—they may use as many as 75 commands to communicate with these creatures, but they can’t claim to fully understand their emotions, either.

The elephants’ retirement from Ringling Bros. comes two years earlier than originally scheduled—the circus will no longer fight the activists who claim the elephants are mistreated in captivity—and likely couldn’t afford the negative publicity much longer. The beasts’ handlers see this transition as an opportunity to “re-story” their relationship with the animals, proving they do have the elephants’ best interests in mind, said Janice Aria, a 40-year veteran of Ringling Bros. (she started in Clown College) and the organization’s director of animal stewardship.

Maybe it’s just tough to tell whether an elephant is enjoying herself.

Still, the nostalgia hung heavy on Sunday. “My heart is going to go through that portal tonight,” Aria said in Providence, gesturing toward the huge curtain that hung between the arena floor and backstage. In front of the curtain stood two portable golden gates, shaped in the form of elephants. Also on hand was Gary Payne, president of the Circus Fans Association of America, proudly wearing a “Save the Circus” button on his red jacket. He lamented the elephants’ departure, saying their disappearance from the circus would make it harder to educate future generations about the threats Asian elephants face, such as habitat loss and poaching.

In recent decades, contemporary circuses have de-emphasized traditional animal acts in favor of storytelling and human acrobatics. But while Ringling Bros.’ “Legends” show may feature tumblers, motorcycle daredevils, and other impressive human tricks, it still has lions and tigers—at least for now. Another animal showcase features trained dogs, pigs, donkeys, goats, and other “fuzzies,” as the crew calls them. The latest addition is a hurdle-jumping kangaroo.

The retiring elephants will still serve human beings, in an altogether different sense. Along with more than two dozen elephants currently living at the Center for Elephant Conservation in Polk City, Florida, the herd—the largest in the Western Hemisphere, according to Aria—will be studied in a novel search for a cure for cancer. Despite having 100 times as many cells as human beings, elephants rarely get cancer, according to Joshua D. Schiffman, a Salt Lake City pediatric oncologist who is partnering with Ringling Bros. to study the blood of elephants. He hopes the project will help scientists develop a synthetic version of the tumor suppressor gene known as p53.

Schiffman survived a bout with childhood cancer at age 15. He grew up in Providence, and as a kid, he saw the same Ringling Bros. circus in the same arena.

“I’m a lover of all things elephants,” he said.

By all accounts, the conservation in Florida will provide plenty of open space for the elephants to roam, plenty of dirt piles and car tires for them to play with. They’ll have a relatively carefree life—no headstands, no dancing on demand. (Schiffman only needs the occasional blood samples to do his work.) But if they can help him find the road to a cancer cure, well, that would truly be the greatest show on earth.

James Sullivan is the author of four books.