Brussels, 1 May 2016 – Greenpeace Netherlands has obtained 248 pages of leaked Transatlantic Trade and Investment Partnership (TTIP) negotiating texts [1]. The documents unveil for the first time the US position and deliberate attempts to change the EU democratic legislative process. 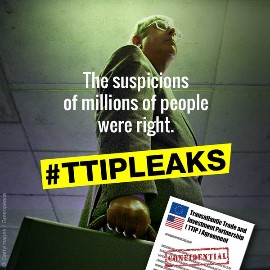 The classified documents represent more than two-thirds of the overall TTIP text as of April, at the 13th round of TTIP negotiations in New York. They cover 13 chapters addressing issues ranging from telecommunications to regulatory cooperation, from pesticides, food and agriculture to trade barriers.

Jorgo Riss, director of Greenpeace EU, said: “These leaked documents confirm what we have been saying for a long time: TTIP would put corporations at the centre of policy-making, to the detriment of environment and public health. We have known that the EU position was bad, now we see the US position is even worse. A compromise between the two would be unacceptable.”

The “General Exceptions” rule, enshrined in the GATT agreement of the World Trade Organisation (WTO), is absent from the text. This nearly 70-year-old rule allows nations to restrict trade “to protect human, animal and plant life or health“, or for “the conservation of exhaustible natural resources” [2].

If the goals of the Paris Summit to keep temperatures increase under 1.5 degrees are to be met, trade should not be excluded from CO2 emissions reduction specifications. But nothing about climate protection can be found in the obtained texts.

The US wants the EU to replace the EU’s hazard approach with ‘risk management’, disregarding the precautionary principle, [3] which is enshrined in the EU Treaty but is never mentioned in the consolidated text.

The leaked documents suggest that both parties consider giving corporations much wider access and participation in decision making.

Jorgo Riss said: “The effects of TTIP would be initially subtle but ultimately devastating. It would lead to European laws being judged on their consequences for trade and investment – disregarding environmental protection and public health concerns.”

[1] Greenpeace Netherlands received a confidential document that was possibly edited in order to identify the source of a leak. Greenpeace retyped the document removing modifications that could have allowed to trace the source.

For breaking news and comment on EU affairs: www.twitter.com/GreenpeaceEU

Greenpeace is an independent global campaigning organisation that acts to change attitudes and behaviour, to protect and conserve the environment and to promote peace. Greenpeace does not accept donations from governments, the EU, businesses or political parties.