Closing the Gaps in Fight against Wildlife Trafficking in Latin America 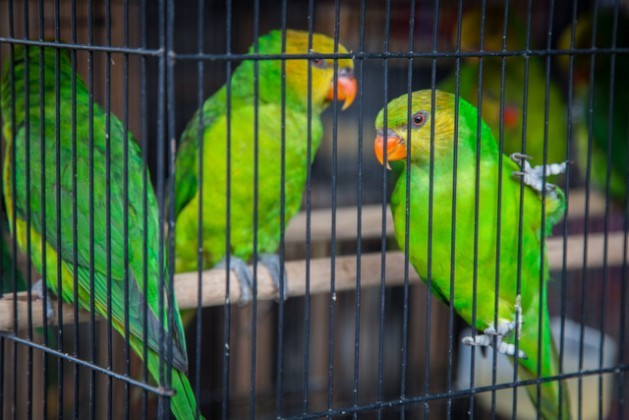 Because of their biological wealth, Latin America and the Caribbean are a source and destination of trafficked species. In the photo, trafficked parrots in a cage after being seized. Credit: World Animal Protection

2 Jun 2016  – Although it violates the international conventions that regulate the wildlife trade, it is possible to go online and find websites to buy, for example, axolotl salamanders (Ambystoma mexicanum) or spiny softshell turtles (Trionyx spiniferus).

These websites reflect new trends in the trafficking of plant and animal species, which help fuel the smuggling of wildlife and form part of the ‘Deep Web’, made up of pages that search engines cannot find.

Despite the magnitude of the damage to biodiversity, Latin America and the Caribbean have made scant progress in fighting wildlife trafficking. The theme of this year’s World Environment Day, celebrated on Jun. 5, is Go Wild for Life.

“People have to be taught that they should not purchase wild animals or plants. That would be enough to cut down trafficking to sustainable levels.” — Juan Carlos Cantú

Because of their biological wealth, Mexico, Central America and the Amazon rainforest – which is shared by Bolivia, Brazil, Colombia, Ecuador, Guyana, Peru, Suriname and Venezuela – are the main sources of trafficked plant and animal species in the region.

Vieto, who is wildlife campaigns officer for Latin America at the London-based international animal welfare organisation, said wildlife trafficking has seen a resurgence in the region, driven by online trade.

The World Wildlife Crime Report, published May 26 by the United Nations Office on Drugs and Crime (UNODC), said Mexico, Argentina, Chile and Venezuela headed the region in terms of seizures of trafficked wildlife in the 2004-2015 period.

This region accounted for 15 percent of global seizures, while North America represented 46 percent, the Asia-Pacific region 24 percent, Europe 14 percent and Africa one percent.

The seizures indicate that the main destinations for reptiles, mammals and birds trafficked from this region are the United States, Europe, and more recently, China.

UNODC reports that some 7,000 species have been discovered in seizures worldwide. And the European Union reported in February that wildlife trafficking generates anywhere between 8.9 and 22.25 billion dollars a year. That makes it one of the four main transnational criminal activities, along with drug, weapon and people trafficking. 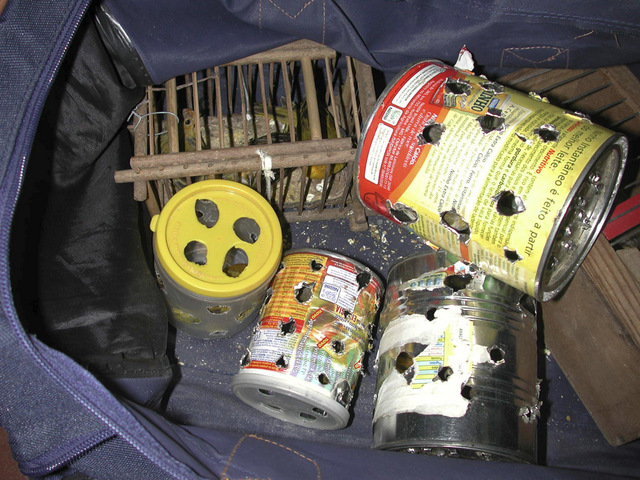 Smuggling, forgery of documents, and the mixture of legal and illegal products are the favorite techniques used by traffickers of wild species. In the photo are small birds in tin cans and a cage, discovered during a seizure in Brazil. Credit: World Animal Protection

Wildlife seizures are an indicator of the scale of the phenomenon. To cite just one example, authorities in Mexico seized more than 200,000 specimens between 2007 and 2011 and arrested 294 suspects.

Part of the SDGs

The elimination of wildlife trafficking forms part of the 2030 Agenda for Sustainable Development.

Of the 17 Sustainable Development Goals (SDGs), number 15 is dedicated to protecting ecosystems, and target number seven is “Take urgent action to end poaching and trafficking of protected species of flora and fauna and address both demand and supply of illegal wildlife products.”

“The problem is very serious,” said Juan Carlos Cantú, the representative in Mexico of the U.S.-based Defenders of Wildlife. “For certain species, trafficking is the only threat they face. International trafficking is focused on endemic species, the rarest ones, the ones that are the most threatened by extinction.”

In Latin America, there are legal vacuums, and laws against wildlife trafficking are not always adequately enforced.

One illustration of this: in its first “National report on the traffick of wild animals”, published in 2014, the Brazilian organisation Renctas concluded that more than one million caimans – related to alligators – are poached every year in wilderness areas in Brazil, and their hides are taken to neighbouring countries for processing and export.

In 2015, Defenders of Wildlife stated in its report “Combating Wildlife Trafficking from Latin America to the United States” that the five most frequently seized animals in the region are queen conches, sea turtles, caimans, crocodiles and iguanas.

The lucrative Chinese market poses an enormous threat to species like the totoaba, sea cucumbers and sharks. The capture of the totoaba, a fish that is endemic to the Gulf of California in northwest Mexico, whose swim bladder is considered a delicacy in Chinese cuisine, is a death sentence for the vaquita (Phocoena sinus), a rare species of porpoise only found in the same area.

Traffickers often use legal documents to hide illegal activities or forged permits to smuggle specimens. As UNODC notes, certain markets are especially vulnerable to the infiltration of illegally sourced or trafficked wildlife. 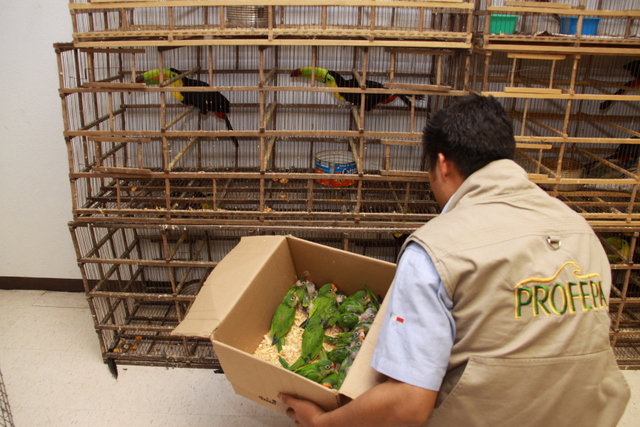 In the photo, an inspector from Mexico’s federal environmental protection agency carries a box of parrots seized in a 2011 operation against the trafficking of protected species of birds. Credit: PROFEPA

Smugglers and their clients take advantage of legal gaps in the region. For example, in Brazil it is illegal to sell wild animals, but it is legal to own them if they were raised in captivity.

Sharks are the perfect illustration of incoherent and contradictory regulations and laws. Most Latin American nations allow them to be sold, but ban their capture for the purpose of removal of their fins, which are in high demand in Asia and provide an incentive to blur the distinction between the legal and illegal markets.

The Convention on International Trade in Endangered Species of Wild Fauna and Flora (CITES), in effect since 1975, regulates more than 5,600 species of animals and 30,000 species of plants from overexploitation through international trade, in accordance with the degree of risk of extinction.

But the millions of species that aren’t covered by CITES can be illegally bred and raised and internationally traded.

Furthermore, national markets are also outside of the reach of the convention, if it cannot be proved that specimens or products have crossed international borders, in contravention of CITES.

In the case of Latin America, since at least 2010 most of the countries have not presented their biennial reports to CITES on how they are implementing the convention, despite the importance of oversight and monitoring in the fight against trafficking.

That gap is going to close, because in its annual meeting in Geneva in February, the CITES Standing Committee decided that its member states must provide statistical information every year on seizures, which will go into an annual report, the first of which will be published in October 2017.

Vieto and Cantú agree on the importance of raising public awareness so that people understand they must not buy wild animals. “Educational campaigns are needed to reduce the consumption of products, step up enforcement of existing regulations and laws, and bolster international cooperation,” to fill in gaps at a local level, said Vieto.

For Cantú, the key is reducing demand. “People have to be taught that they should not purchase wild animals or plants. That would be enough to cut down trafficking to sustainable levels,” he said.

Part of the SDGs

The elimination of wildlife trafficking forms part of the 2030 Agenda for Sustainable Development.

Of the 17 Sustainable Development Goals (SDGs), number 15 is dedicated to protecting ecosystems, and target number seven is “Take urgent action to end poaching and trafficking of protected species of flora and fauna and address both demand and supply of illegal wildlife products.”

For the 17th meeting of the Conference of the Parties to CITES, to be held in Johannesburg Sep. 24-Oct. 5, El Salvador, Guatemala and Honduras asked for the inclusion of four kinds of lizards from the Abronia genus in Appendix I – species for which CITES prohibits international trade.

In one illustrative case, Mexico asked for the inclusion of 13 species of rosewood (Dalbergia calderonii) in Apendix II – species in which trade must be controlled – to protect the tree from logging for timber.