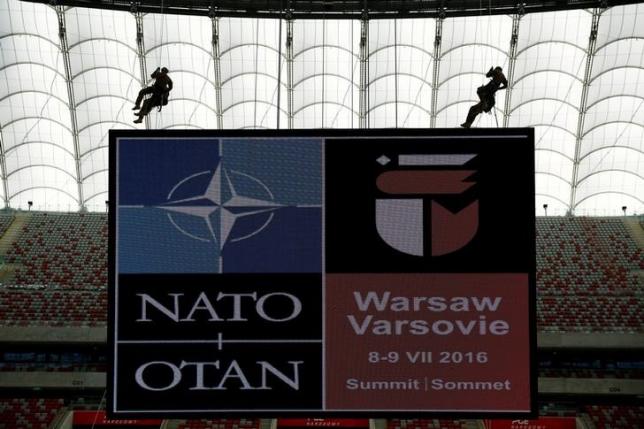 Soldiers demonstrate their skills during a military police exercise before the NATO summit in July in Warsaw, at the PGE National Stadium in Warsaw, Poland May 24, 2016.
Reuters/Kacper Pempel/File Photo

6 Jun 2016 – A large-scale military training exercise involving more than 20 NATO and partner countries kicked off in Poland on Monday [6 Jun], part of efforts to reassure east European nations rattled by Russia’s actions in nearby Ukraine.

For more than 10 days, 30,000 troops backed by large numbers of vehicles, aircraft and ships will be deployed in one of the biggest exercises on NATO’s eastern flank since the end of the Cold War, a move likely to put further strain on the already-tense relations between the Kremlin and the West.

The Anakonda-16 exercise, which includes manoeuvres such as a night-time helicopter assault and the dropping of U.S. paratroopers to build a temporary bridge over the Vistula river, is being held one month before a NATO summit in Warsaw that will approve more troops to be stationed in eastern Europe.

The goal of Anakonda-16 is to “train, exercise and integrate the Polish national command and force structures into an allied, joint multi-national environment,” the U.S. Army Europe said.

The United States will provide around 14,000 troops for the exercise, the largest foreign contingent. Non-NATO countries such as Sweden and Finland are also taking part in the exercise.

Poland joined NATO in 1999, a decade after the demise of Moscow-backed communism in eastern Europe. Warsaw has been very critical of Moscow’s actions in Ukraine and has repeatedly urged NATO to boost its presence on Polish territory.

Russia has accused the U.S-led alliance of threatening its security by expanding eastwards and has warned of retaliation.

NATO says exercises such as Anakonda-16 and plans for the deployment of more troops to the region are a defensive response to Russia’s annexation of Ukraine’s Crimea region and its support for separatists in eastern Ukraine.

NATO officials have also expressed concern about Russia’s own military exercises in which thousands of Russian troops conduct war games without giving the alliance any prior warning.

For the sake of transparency, the bi-annual Anakonda exercise, which was first conducted a decade ago, has been registered with the Organization for Security and Co-operation in Europe (OSCE), the Polish army said.

Tensions between Russia and NATO have been highlighted by recent encounters of their armed forces. In April, two Russian warplanes flew what U.S. officials described as simulated attack passes near a U.S. guided missile destroyer in the Baltic Sea.

Russia, in turn, accused the United States of intimidation by sailing a U.S. naval destroyer close to Russia’s border in the Baltic region and warned that it would respond with “all necessary measures” to any future incidents.

Moscow also accused Washington of attempting to blunt the Russian nuclear arsenal after it switched on an $800 million missile shield in Romania and broke ground on a similar site in Poland. Washington says the shield is vital to defend the United States and Europe from so-called rogue states.