Still, the more distressing news is that none of the nine nuclear weapon-possessing states – the US, UK, Russia, France, China, India, Pakistan, Israel and North Korea – are prepared to give up their existing weapons now, or in the foreseeable future.

The decrease in the overall number is due mainly to Russia and the US – which together still account for more than 93 per cent of all nuclear weapons – further reducing their inventories of strategic nuclear weapons. 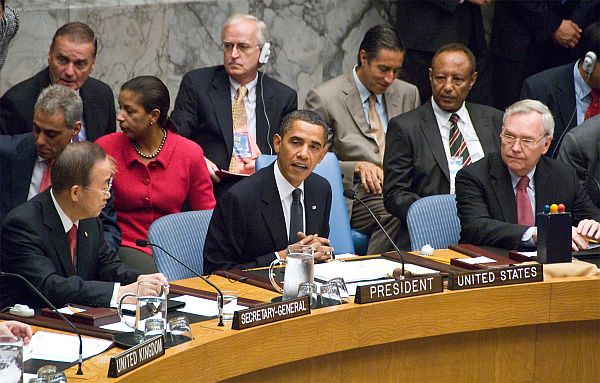 However, despite the implementation of the bilateral Treaty on Measures for the Further Reduction and Limitation of Strategic Offensive Arms (New START) since 2011, the pace of their reductions remains slow, said SIPRI.

The equally bad news, however, is the continued modernization of nuclear weapons both by the US and Russia.

Although details of the Russian program are not public, the US plans to spend $348 billion during 2015–24 on maintaining and comprehensively updating its nuclear forces.

Some estimates suggest that the US nuclear weapon modernization program may cost up to $1 trillion over the next 30 years, according to SIPRI.

Alice Slater, an Advisor to the Nuclear Age Peace Foundation and who serves on the Coordinating Committee of Abolition 2000, told IPS the US has committed to spending $348 billion over the next ten years on two new bomb factories, new warheads and upgraded delivery systems by planes, submarine and land-based missile, estimating a budget of one trillion dollars over the next 30 years.

Last summer, the US tested a dummy warhead in Nevada for an earth-penetrating nuclear bunker buster, she pointed out.

Despite President Barack Obama’s qualified April 2009 Prague speech urging a world free of nuclear weapons – for which he received a Nobel Peace Prize, even after having noted that his dream of a world free of nuclear weapons “may not happen in my lifetime”- he has made the smallest reductions in the US nuclear arsenal compared to any previous post- cold war US President, said Slater.

And Hillary Clinton, the presumptive Democratic nominee for US President at the November elections, famously misquoted Obama’s Prague speech when she was Secretary of State, saying Obama had said a nuclear weapons free world may not happen for “several lifetimes,” she added.

“Disarmament is part of the DNA of the United Nations, which was formed when the first and last use of nuclear weapons in war was fresh in people’s minds.”

Since then, he pointed out, all countries have rejected the use of nuclear weapons.

“But until these weapons are completely eliminated, they continue to pose a threat to our common well-being.  Fears of nuclear terrorism make disarmament even more urgent and important,” he added.

Hans Kristensen, co-author of the SIPRI Yearbook said the ambitious US modernization plan presented by the Obama Administration is in stark contrast to President Barack Obama’s pledge to reduce the number of nuclear weapons and the role they play in US national security strategy.

The other nuclear weapon-possessing states have much smaller arsenals, but have all either begun to deploy new nuclear weapon delivery systems or announced their intention to do so, he added.

China appears to be gradually increasing its nuclear forces as it modernizes the arsenal. India and Pakistan are both expanding their nuclear weapon stockpiles and missile delivery capabilities.

North Korea is estimated to have enough fissile material for approximately 10 nuclear warheads. However, it is unclear whether North Korea has produced or deployed operational weapons, said Kristensen.

“Despite the ongoing reduction in the number of weapons, the prospects for genuine progress towards nuclear disarmament remain gloomy,” said Shannon Kile, Head of the SIPRI Nuclear Weapons Project.

“All the nuclear weapon-possessing states continue to prioritize nuclear deterrence as the cornerstone of their national security strategies,” he added.

Apart from counting bombs in the respective nuclear arsenals, Slater told IPS, “we must factor in the aggressive and provocative expansion of NATO (North Atlantic Treaty Organisation) up to the Russian border as a block to nuclear disarmament, despite promises given to (former Soviet leader Mikhail) Gorbachev when the Berlin Wall came down that NATO would not expand beyond East Germany as well as the US having planted new missile bases in Turkey, Romania and Poland after President Bush walked out of 1972 Anti-Ballistic Missile Treaty.

It is significant that part of the deal US President John F. Kennedy made with Soviet President Nikita Khrushchev when the Soviet Union took their missiles out of Cuba was that the US would remove its missiles from Turkey.

“Despite the ongoing reduction in the number of weapons, the prospects for genuine progress towards nuclear disarmament remain gloomy.” — Shannon Kile

“Well they are back in Turkey.  The US also plans to modernize the nuclear weapons it bases in five NATO countries, Germany, Holland, Belgium, Turkey, and Italy.   And the US Asia “pivot” with expanded bases in Japan, South Korea, Australia and the Philippines is an enormous obstacle to enroll the Asian nuclear powers in endorsing nuclear disarmament,” declared Slater.

She argued that US plans to dominate and control the military use of space also block further possibilities for nuclear disarmament.

Gorbachev and (US President Ronald) Reagan spoke about abolishing nuclear weapons, but Gorbachev pulled his offer off the table when Reagan wouldn’t promise to forego Star Wars.

Then Russian Prime Minister Vladimir Putin offered a deal to (US President Bill) Clinton “to cut our massive arsenals to 1,000 nuclear weapons each, at which point we could invite all the other nuclear weapons states to the table to negotiate for their elimination, but only  if Clinton would forego the development of missile bases in Eastern Europe.

Slater said Clinton refused, and subsequently Bush unilaterally withdrew from the ABM Treaty in 2002.  Russia and China have actually been proposing, since 2008, a draft treaty to ban weapons in space which the US vigorously opposes by blocking consensus to even discuss it in the Committee on Disarmament in Geneva.

Finally, the nuclear weapons states have boycotted the 2016 Geneva meetings of the Open Ended Working Group for Nuclear Disarmament, established by the UN General Assembly, which have been discussing the legal gap in the law that fails to prohibit and ban nuclear weapons as we have done for biological and chemical weapons.

The Non-Proliferation Treaty (NPT) merely promises “good faith efforts” for nuclear disarmament and the International Court of Justice (ICJ) left a gap in its 1996 decision on the legality of nuclear weapons when it said it couldn’t decide if nuclear weapons were illegal in the case where the very survival of a state was at stake.

“It appears that the non-nuclear weapons states may be prepared this year to start negotiations on a ban treaty without the rogue nuclear weapons states and some of the hypocritical “weasel” states who profess to want nuclear abolition but rely on the US nuclear umbrella for their “security”.”

These include NATO states and Japan, incredible as that may seem, as well as Australia and South Korea.  Hopefully, a treaty to ban the bomb signed by the 127 countries that are supporting the effort at this time, may break up this discouraging logjam for meaningful progress on nuclear disarmament as reported in the recent SIPR Annual count of the world’s nuclear arsenals, Slater noted.