30 Jun 2016 – From the start of the campaign to impeach Brazil’s democratically elected President Dilma Rousseff, the primary justification was that she used a budget trick known as pedaladas (“peddling”: illegal delay of re-payments to state banks) to mask public debt. But this week, as the Senate conducts her impeachment trial, that accusation was obliterated: The Senate’s own expert report concluded there was “no indication of direct or indirect action by Dilma” in any such budgetary maneuvers. As the Associated Press put it: “Independent auditors hired by Brazil’s Senate said in a report released Monday that suspended President Dilma Rousseff didn’t engage in the creative accounting she was charged with at her impeachment trial.” In other words, the Senate’s own objective experts gutted the primary claim as to why impeachment was something other than a coup.

The report did not fully exonerate Dilma, finding that she did open lines of credit without congressional approval, part of the impeachment case. But it was the pedaladas charge that dominated the debate all along. 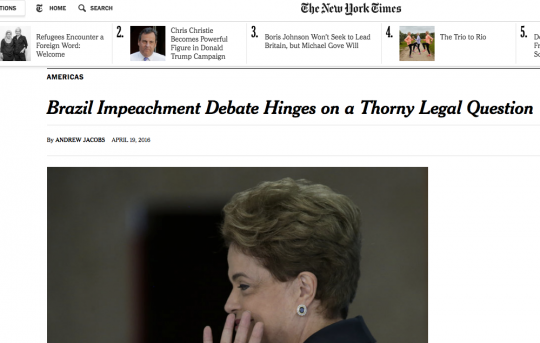 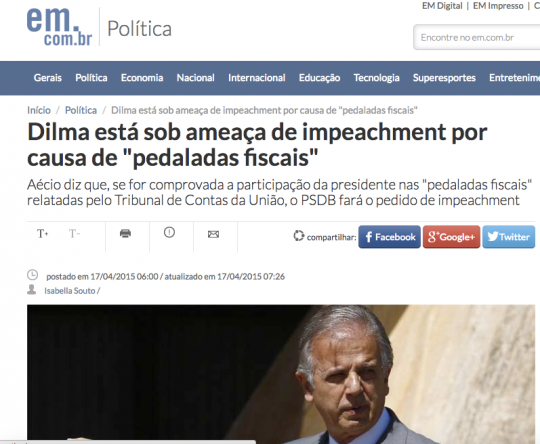 (Headline above: Dilma is under threat of impeachment because of fiscal pedaladas) 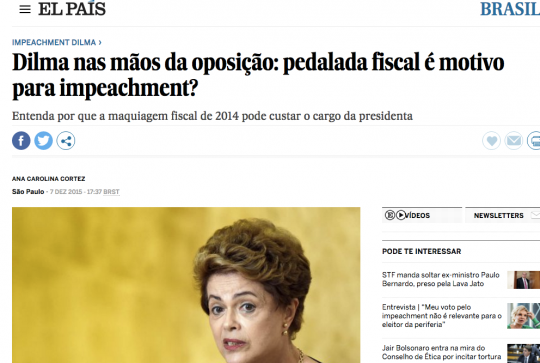 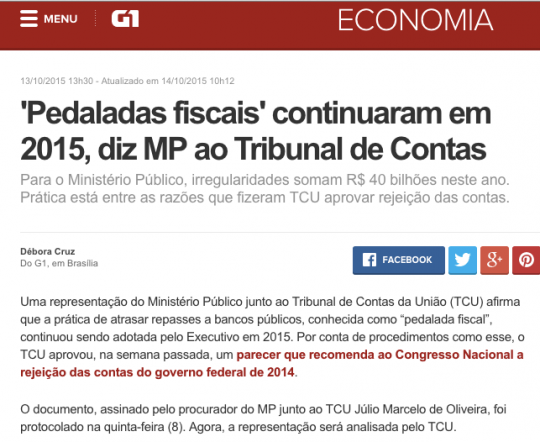 If Dilma’s impeachment were actually motivated by its stated cause — lawbreaking — this devastating report would stop impeachment in its tracks. Elio Gaspari, a leading columnist with Brazil’s largest paper, Folha de São Paulo, wrote on Tuesday — under the headline “There is a Coup” — that in light of this new report, Dilma’s impeachment may not be a “coup” in the sense that it is being achieved extra-legally, but it is now a coup in the sense that it is achieved without elections: by “plotting” through a “ruse.”

But so obviously, impeachment was never about any alleged lawbreaking by Dilma — that was just the excuse to remove a democratically elected president for ideological reasons — which is why the destruction of the primary legal charge against her has barely dented the impeachment momentum. Even the vehemently anti-Dilma paper Estadão documented how leading impeachment advocates this week instantly shifted their rationale: from claiming that pedaladas requires her impeachment to proclaiming that it was never actually important in the first place. Those are the actions of people devoted to an end without caring about the justification: They are determined to impeach Dilma for ideological reasons, so the destruction of the legal case against her makes no difference. 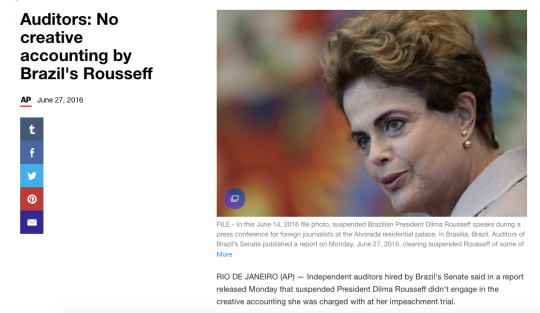 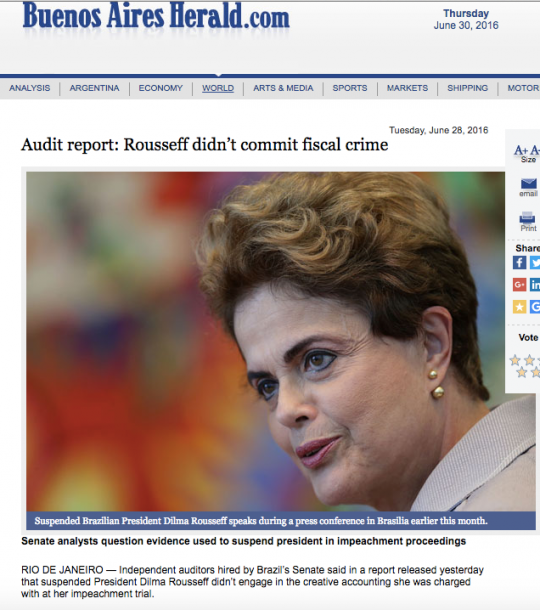 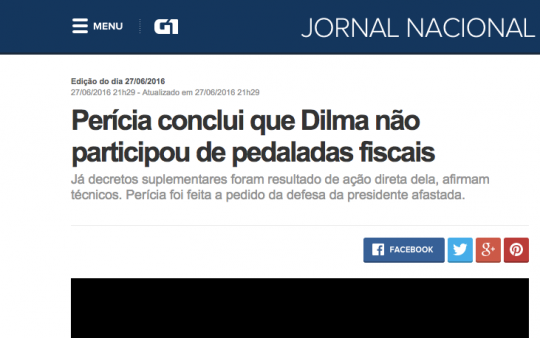 (Headline above: Expert report concludes that Dilma did not participate in fiscal pedaladas) 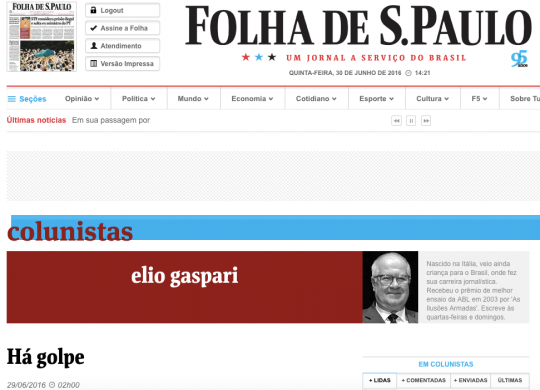 Even more significant is the growing evidence of the full-scale corruption of Dilma’s installed replacement, Michel Temer. In just over 30 days since his installation, Temer lost three of his chosen ministers to corruption. One of them, his extremely close ally Romero Jucá, was caught on tape plotting Dilma’s impeachment as a way to shut down the ongoing corruption investigation, as well as indicating that Brazil’s military, the media, and the courts were all participants in the impeachment plotting.

A key investigation informant, former senator and construction executive Sérgio Machado, has now said that Temer received and controlled 1.5 million reals in illegal campaign funds, while a separate informant last week said Temer was the “beneficiary” of 1 million reals in bribes. And Temer is now banned by a court order from running for any office for eight years due to his own violation of election laws. Remember: This is who, in the name of fighting “corruption,” Brazil’s elites installed in the place of the elected president.

Meanwhile, Temer’s political party, PMDB, is almost certainly the most corrupt in this hemisphere. Its president of the lower House, Eduardo Cunha — who presided over Dilma’s impeachment — is now suspended by the Supreme Court, and the House’s Ethics Commission just voted to expel him entirely because he lied about bribe-filled Swiss bank accounts he controls. The same construction executive, Machado, testified that three of PMBD’s key leaders — including Jucá — were paid a total of 71.1 million reals in bribes. Meanwhile, two key Temer allies from the center-right PSDB that Dilma defeated in 2014 — Temer’s Foreign Minister José Serra and Dilma’s 2014 opponent Aécio Neves — are now both targets of the corruption investigation.

Until Temer’s party, PMDB, decided to support Dilma’s impeachment and thus empower its own corrupt leaders, PMDB was a key ally of Dilma. Dilma’s party, PT, has its own healthy share of corrupt figures. But PMDB is little more than a self-serving, opportunistic transactional faction that has existed to grease the wheels of corruption and kickbacks in Brasília. The ironic joke that this is the party that has gained power and taken over in the name of anti-corruption is too extreme to put into words. As the New York Times put it in May, Temer’s party is the one that controlled, and has now ruined, Rio: “The same party that created a mess in Rio is now running the country.”

As glaring as Temer’s corruption and the fraud of Dilma’s impeachment already were, two new events this week bolster it even further. First, Temer had dinner with two members of Brazil’s Supreme Court — the body presiding over the corruption investigation and impeachment proceedings. Also attending the meeting were his Foreign Minister Serra and his close ally Aécio, both of whom are targets of that corruption probe. So Temer is literally meeting in secret with the very judges who are deciding impeachment and corruption probes (at the same time that Brazilian politicians, preparing to impose austerity measures, are voting to lavish these judges with a significant increase in their salary).

Second, at the same time that Temer is privately meeting with key judges, reports have surfaced that he is working hard on an agreement to “save the skin” of Cunha, one of the country’s most corrupt politicians. Temer met at night with Cunha just this week. One plan being actively discussed would allow Cunha to resign and then have his criminal case assigned to favorable judges. Another provides that Cunha merely resign his presidency to maximize the chances that he will not be expelled from the House altogether. Worse still, O Globo today reported that Temer is now actively working with Aécio to ensure that Cunha’s successor is favorable to him: someone who “did not work for Cunha’s removal.”

Just think about what has happened when it comes to control over the world’s fifth most populous (and very oil-rich) country. The democratically elected president was impeached despite no allegations of personal corruption — by politicians who are knee-deep in bribery and kickback scandals. The primary pretext used to impeach her has just been debunked by the Senate’s own independent expert report. The corruption-plagued man they installed in her place — who currently has a 70 percent disapproval rating, and whom 60 percent of the country wants impeached — is now secretly meeting with the very judges whose supposed independence, credibility, and integrity were the prime argument against calling this a “coup,” all while he plots to save his bribery-enriched fellow party member. And while all this happens, they are blithely proceeding to impose a right-wing agenda of austerity and privatization that democracy would never allow.

Whatever the motives were for getting rid of Dilma, illegality and corruption plainly had nothing to do with it. Just look at this week’s Senate report, or the face of the person they’ve installed, to see how true that is.

Clarification: this article was edited on July 1 to reflect that the 41% salary increase just approved was for employees of the judicial branch, to be made in installments over four years as compensation for prior years of lost wages; the bill to increase the salaries of Supreme Court judges is proceeding to approval in the Congress.