29 Jun 2016 – Bank of America leads the list of companies that have paid over $1 billion in penalties and fines to the U.S. government in the last six years. Violation Tracker, a new corporate misconduct database maintained by Good Jobs First, estimates that the North Carolina bank has paid $56 billion. 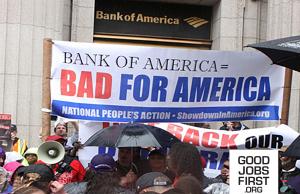 Second on this list is JP Morgan Chase which has paid out $28 billion in fines and penalties to the U.S. government while BP comes in at third place with $25.4 billion. These are some of the conclusions from 110,000 cases and $270 billion in fines and penalties listed by 27 U.S. regulatory agencies since the beginning of 2010 that have been added to Violation Tracker. What is perhaps most surprising is that only 473 — less than one half of one percent of the cases — involve criminal charges.

“When an individual commits a serious offense, chances are that he or she is going to face a criminal charge. When a corporation breaks the law in a significant way, in most cases it faces a civil penalty,” writes Phil Mattera, one of the architects of the database. “(But) apart from when they engage in price-fixing, large corporations rarely face criminal charges. When they do, they are often allowed to settle without a formal prosecution. And when they do plead guilty, these can get waivers from the consequences of their conviction.”

When the database was launched last October, Good Jobs First compiled 100,000 entries from the disparate records of the Environmental Protection Agency, the Occupational Safety & Health Administration and a dozen other environmental and health and safety agencies. The database also included settlements and verdicts in cases referred by those agencies to the U.S. Justice Department. Earlier this week, Good Jobs First added another 10,000 cases from the financial sector together with companies charged with other misdemeanors such as price-fixing, consumer fraud and foreign bribery.

“Violation Tracker is an important step in creating a comprehensive database of corporate crime in the United States,” Mattera wrote in a press statement. “The never-ending cases of corporate wrongdoing, seen most recently in the Volkswagen emissions scandal, make it essential for policymakers, advocates, journalists, and the general public to have access to systematic information across agencies.”

The database could prove very useful to procurement officers who are charged with choosing between multiple bidders on multi-billion dollar contracts. Under new rules proposed by the Obama administration issued in 2014, titled the Fair Pay and Safe Workplaces Executive Order, the government is required to contract only with companies that have a “satisfactory record of performance, integrity, and business ethics.”

In actual practice, procurement officers have no single way to effectively review companies’ records for responsibility, nor does it ensure—before awarding contracts—that violators reform their practices. Violation Tracker is thus a much needed first step towards achieving those key public goals and making sure that that federal contractors obey workplace laws before receiving government contracts. (For more on this topic, see Subsidizing Contractor Misconduct, a report written by the late Chris Thompson for CorpWatch.)

Good Jobs First, which is based in Washington DC, also tracks the amount of money that corporations get in government subsidies through a database called Subsidy Tracker. “Uncle Sam’s Favorite Corporations” – the latest report from Subsidy Tracker – found that the U.S. federal government had awarded $68 billion in “grants and special tax credits” in the last 15 years. Two thirds of this have gone to large corporations. Six companies were awarded over $1 billion, 21 got $500 million or more, and 98 received $100 million or more. (These numbers do not include the hundreds of billions of dollars given to the banking sector during the financial crisis)