Russia-China Strategic Partnership: On the Road to United Eurasia

Whenever President Vladimir Putin stresses Russia’s “all-embracing and strategic partnership” with China, one can hear the proverbial howls of anger emanating from the neocon/neoliberalcon axis in the Beltway.

30 Jun 2016 – As he met Chinese president Xi Jinping in Beijng this past Saturday [25 Jun], Putin even allowed himself an understatement:

Why understatement? Because this really ventures way beyond a stream of business deals.

Deals, of course, matter; in Beijing, China and Russia advanced 58 projects worth $50 billion. These include a $6.2 billion loan from Beijing to build the 770 km-long high-speed railway between Moscow and Kazan and $12 billion in loans to build an LNG plant in the Russian Arctic.

Russian Railways, Russian investment company Sinara Group, China Railway, and Chinese CRRC will also invest in a plant in Russia to build 100 high-speed trains, designed for the Moscow-Kazan high-speed railway. The railway inevitably will be connected to the future, $100 billion, high-speed expansion of the Trans-Siberian between Moscow and Beijing.

It goes without saying, this is all part of an essential node of the New Silk Roads. And as if this was not enough, in a further, graphic instance of geoeconomic interpolation, Russia and China’s central banks are setting up a yuan clearing mechanism in Russia.

Putin and Xi met for the 15th time just after Xi concluded a three-nation Eurasia tour – Serbia, Poland and Uzbekistan – where, alongside Foreign Minister Wang Yi, he explicitly laid down the bridge between the New Silk Roads, or One Belt, One Road (OBOR), as they are officially referred to in China, and the development of the Shanghai Cooperation Organization (SCO). 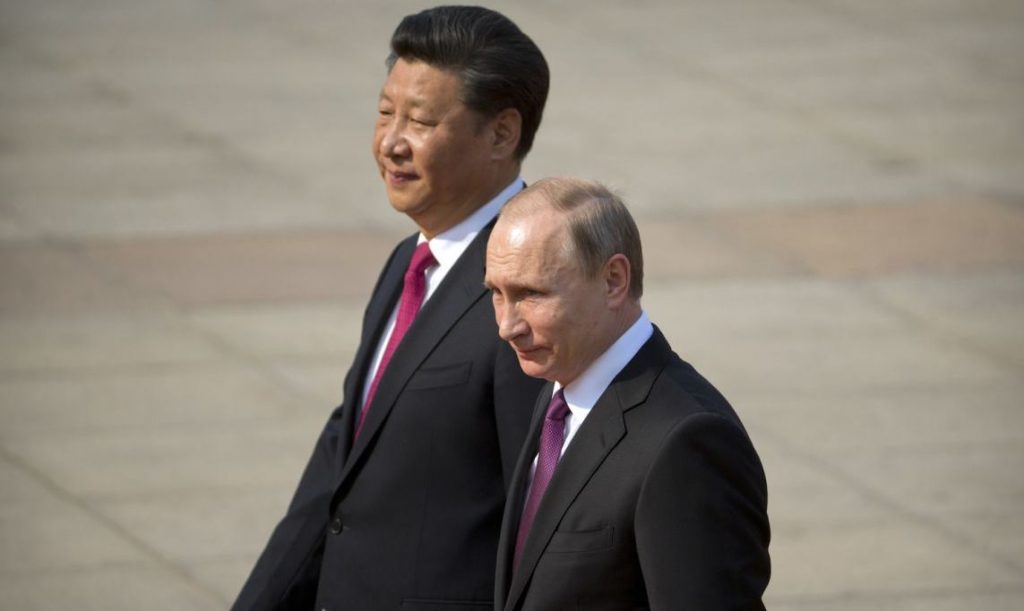 This already translates into projects such as the Hungary-Serbia railway; the Pupin Bridge on the Danube River in Belgrade; the expansion and upgrading of a power plant in Kostolac; what Beijing calls the China-Europe freight train service (from eastern China to Duisburg in Germany and also Madrid); the Kamchiq Tunnel in Uzbekistan; and last but not least the massive China-Central Asia natural gas pipeline system.

No wonder Xi keeps stressing the “inter-connectivity” theme over and over gain, as economic corridors are being built at breakneck speed, and the China Railway Express all the way to Europe – although not yet on high-speed rail – is already a go.

So there was plenty to talk about at the 16th SCO Council in Tashkent. Plus, the acceleration of full membership to both India and Pakistan; next year will be Iran’s turn.

What this translates to in practice is the amalgamation of the New Silk Roads/OBOR; the Eurasia Economic Union, EEU (as Putin stressed in the St. Petersburg forum); the SCO; financing mechanisms such as the Asia Infrastructure Investment Bank (AIIB); and the overarching Russia-China strategic partnership.

No wonder a certain Sultan Erdogan was watching all this in Ankara with trepidation, and decided to make a move. Erdogan’s attempt at a rapprochement with Russia involves not being hopelessly sidelined in this OBOR/EEU/SCO amalgamation. Turkey cannot afford to be alienated from Russia; the Turkish Stream gas pipeline will be essential to consolidate Ankara’s position as a key energy crossroads towards Europe. At the same time, Ankara must imperatively position itself as a key hub in OBOR.

With India and Pakistan, and later Iran, as full members, the SCO will be able, in the medium term, not only to interface with OBOR on all sides (via the China-Pakistan Economic Corridor, CPEC, and also the Indian investment in the Iranian port of Chabahar); but also to be the key player in brokering a solution to the Afghan drama, something that the Americans and NATO would never be able to accomplish. Russia and China have always insisted that Afghanistan needs an Asian solution.

Almost simultaneously to the Putin-Xi meeting in Beijing, and also not by accident, the AIIB turbo-charged its operations.

The AIIB started doing business only six months ago, with 57 founding member countries and $100 billion in committed capital.

The board approved its first four deals, worth $509 million, with three projects co-financed with the World Bank, the Asian Development Bank (ADB), the United Kingdom Department for International Development and the European Bank for Reconstruction and Development. They refer to a slum renovation in Indonesia and highways in Pakistan and Tajikistan. A power grid upgrade in Bangladesh will be solely AIIB financed.

And this is just the beginning. The head of AIIB may be Chinese, Jin Linqun (he has promised a “lean, clean and green” AIIB), but one of the five vice presidents is British, Daniel Alexander. Beijing holds 30% of the initial capital but has only 26% of voting power. India holds 7.5% and Russia 5.9%, followed by Germany and South Korea. This is a real multipolar project.

Almost simultaneously to the AIIB in action, Russia and China’s foreign ministers signed a declaration supporting the role of international law, stressing sovereign equality of states; non-interference into internal affairs; and peaceful resolution of disputes. Considering the recent historical record, not exactly The Empire of Chaos’s cup of tea.

Commenting on Brexit, Boris Titov, the Kremlin’s small business ombudsman, ventured, ”it’s not long until a united Eurasia – about 10 years.” Considering the slowly but surely interpenetration of OBOR, EEU, SCO, AIIB, the NDB and the solid Russia-China partnership inside the G20, that’s more than feasible.

In Beijing, Putin and Xi did discuss their common position in the upcoming G20, only three months away in China; that’s where the real action is, not the G7. Compare it also with NATO’s upcoming warmongering summit in Warsaw; that’s what the West has to “offer” the global South.

In a nutshell; the option to a united Eurasia is chaos. And there’s no question the Empire of Chaos will stop trying to sow chaos. Expect Beijing ordering 1,000 heavy transport aircraft from Russia and Russian ships possibly spotted sooner or later in the South China Sea to add to those perennial howls of anger in the neocon/neoliberalcon galaxy.