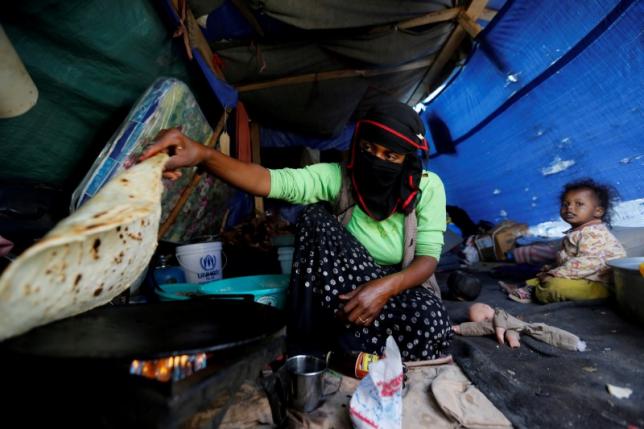 A woman makes bread inside her tent at a camp for internally displaced people near Sanaa, Yemen, May 24, 2016.
Reuters/Khaled Abdullah/File Photo

14 Jul 2016 – Many areas of Yemen are close to famine partly because importers are unable to buy new food stocks from abroad as over $200 million is stuck in banks due to the civil war disruption, trade and aid sources involved say.

Western banks had already cut credit lines for traders shipping food to Yemen, fearing they would not be repaid due to the security chaos and fragile financial system. Now, they are increasingly unwilling to offer letters of credit, which guarantee sellers will be paid on time.

They are reluctant to offer guarantees because the banking system has seized up.

An international commodities trade source involved in the food trade with Yemen, who has knowledge of the country’s financing troubles, said as much as $260 million – held in different foreign currencies in Yemeni banks – cannot be transferred abroad partly because relations with many Western banks had broken down.

An aid official also confirmed the amount of funds frozen was at least $260 million.

This means that traders must withdraw the money in Yemen, and then send it abroad, usually by plane, a solution fraught with difficulties at a time of war.

Without imported staples such as wheat and flour, the United Nations says many areas of Yemen are now close to famine as most buffer stocks have been drawn down.

“This problem is getting worse and no Yemeni bank can transfer money out directly. They have to fly funds out to the nearest country and make deposits in accounts abroad,” the international commodities trade source said.

“These funds are probably likely to remain stuck for the foreseeable future. For private importers – this is just another hurdle and a further sign of the worsening crisis in bringing goods in.”

Officials at Yemen’s central bank declined to comment. Last month a central bank spokesman said it had decided not to conduct interviews during the crisis.

The aid source, also familiar with the financing issues, confirmed separately there had been efforts to fly out funds to be used to pay for goods.

“There are still sizeable funds stuck inside Yemen due to a lack of correspondent banking or access to basic trade finance for Yemeni importers,” the aid source said.

“There is no external financing they can get hold of to provide guarantees for the other companies they are buying from that they will get paid. Flying money out is one way but this is also proving hard to do.”

Over the past year, a Saudi-led coalition has tried to reverse a bid for national power by Houthi rebels – seen by many Gulf Arabs as a proxy for regional arch-rival Iran in a conflict in which thousands have died.

A shaky ceasefire has brought some respite from the war which started when the Houthis pushed the government into exile in March 2015. But clashes regularly flare up on various battlefronts throughout Yemen. At the same time, Islamists militants have gained territory – deepening a security vacuum.

An official with a Yemeni government bank said the Saudi-led coalition allowed as much as $100 million from three commercial banks to travel by plane to Bahrain earlier this year. The official and the trade source both said the funds were deposited in an account with Yemen’s Tadhamon International Islamic Bank in Saudi Arabia – a process which took months to complete.

“The banks did however lose a lot of money through doing this as the rent of the plane that transferred the funds was around $600, 000,” the official said.

Other separate officials with commercial Yemeni banks said there were moves to try and make further transfers of funds to Bahrain.

“Living Through a Tragedy”

The United Nations has said the economy is close to collapse and many areas are at risk of famine, a word the agency uses sparingly and only when certain criteria have been met.

It said 10 out of Yemen’s 22 governorates were currently in a phase 4, or emergency, situation. If an area reached phase 5 famine is declared.

“Food imports have been going down which should translate into lower stocks,” said the U.N. Food and Agriculture Organisation’s regional representative Abdessalam Ould Ahmed.

Ahmed said while it had not reached phase 5 yet, there was nevertheless “significant deterioration”, especially in the city of Taiz in central Yemen.

A famine is declared when at least 20 per cent of households in an area face extreme food shortages with a limited ability to cope; acute malnutrition rates exceed 30 per cent; and the death rate exceeds two persons per day per 10,000 persons.

Out of Yemen’s 28 million people 21 million people need some form of humanitarian aid and over half the population suffer from malnutrition, the UN said.

Out of a 3 million-tonne cereal import requirement from the commercial sector for 2016, only 580,000 tonnes of wheat had been imported so far this year due to foreign exchange problems, a lack of hard currency and disruptions at the country’s ports – some of which have been damaged due to fighting.

“Unless banking regulators re-open Yemen’s bank accounts and allow food companies to trade, it won’t be long until warnings of catastrophe become a reality.”

Mohammed Abdul Latif, a 28-year old unemployed telecoms engineer who lives near the central city of Ibb said the price of a 40 kg sack of flour had risen to 7,000 Yemeni riyals, about $25, in cities and 8,000 riyals in rural areas from 5,000 riyals previously.

“People are living through a tragedy. We can’t provide our families the food they need due to the surge in prices, especially here in the countryside, where thousands of people have fled,” Latif said.