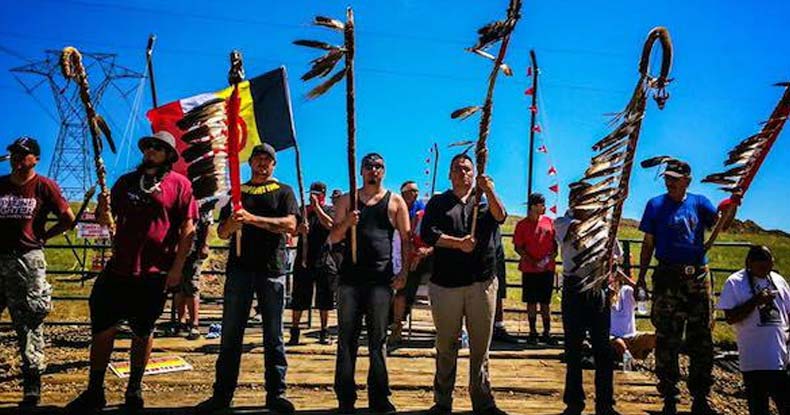 22 Aug 2016 – The Camp of the Sacred Stones has swelled from a few dozen to more than 2,500, according to Standing Rock Sioux Tribe officials. They are calling for further review of the Dakota Access oil pipeline, approved by the U.S. Army Corps of Engineers at the end of July without a full environmental assessment. Source: Indian Country Today

Last week, a few dozen Native Americans showed up to protest the $3.8 billion, 1,172-mile-long pipeline that would cross right through their sacred land. As word spread, however, the few dozen turned into more than 2,500 native Americans. Because of the large turnout, a brief victory ensued for the people after the developers of the four-state oil pipeline agreed to halt construction until after a federal hearing in the coming week.

In spite of both the company building the pipeline, Dallas-based Energy Transfer Partners, and the federal government applying pressure, the Native Americans from the Standing Rock Sioux Tribe have remained resilient.

On Tuesday, the government placed a restraining order on the protesters prohibiting them “from interfering with its (Energy Transfer Partners’) right to construct the Dakota Access Pipeline (the “Pipeline”) in accordance with all local, state, and federal approvals it has obtained.”

However, the protestors remained steadfast — and peaceful.

“As we have said from the beginning, demonstrations regarding the Dakota Access pipeline must be peaceful,” Standing Rock Sioux Chairman David Archambault II said in a statement to reporters on August 17. “There is no place for threats, violence or criminal activity. That is simply not our way. So, the Tribe will do all it can to see that participants comply with the law and maintain the peace. That was our position before the injunction, and that is our position now.”

“The pipeline presents a threat to our lands, our sacred sites and our waters, and the people who will be affected must be heard,” Archambault told reporters. “Peaceful demonstration can be very powerful and effective. But the power of peaceful demonstration is only diminished by those who would turn to violence or illegality. We cannot let that happen. The Tribe is committed to doing all it can to make sure that the demonstrations are conducted in the right way.”

In spite of the threat to the sacred land and the unscrupulous action of the state in taking that land on behalf of big oil, government officials maintain their justification.

“Dakota Access has obtained the necessary easements and rights of way to construct the Pipeline in North Dakota and the necessary federal, state, and local permits for the Oahe Crossing,” the court said. “In accordance with the permits and approvals obtained for the Pipeline project, Dakota Access has commenced construction activities in North Dakota.”

On Saturday, the group appealed to the United Nations in a last stitch effort to prevent their land from being taken from them and given to Energy Transfer Partners.

“We specifically request that the United States Government impose an immediate moratorium on all pipeline construction until the Treaty Rights and Human Rights of the Standing Rock Tribe can be ensured and their free, prior and informed consent is obtained,” Chairman Archambault and the Treaty Council said in their appeal to top U.N. human rights officials.

According to Indian Country Today,

As a matter of extreme urgency, the Standing Rock Sioux Tribe and Treaty Council jointly submitted an urgent action communication to four U.N. human rights Special Rapporteurs citing “ongoing threats and violations to the human rights of the Tribe, its members and its future generations.” The tribe’s water supply is threatened by construction of the Dakota Access pipeline, which was permitted by the U.S. Army Corps of Engineers in late July, despite the objections of three federal agencies including the federal Environmental Protection Agency, the Department of the Interior and the Advisory Council on Historic Preservation.

“This pipeline’s construction is being carried out without the Tribe’s free, prior and informed consent in direct contradiction to their clearly expressed wishes.”

The hearing is scheduled for Wednesday [24 Aug] in Washington D.C. on the tribe’s request for an injunction.

The Dakota Access pipeline violates tenets of the U.N. Declaration on the Rights of Indigenous Peoples, including the “right to health, right to water and subsistence, threats against sacred sites including burial grounds, Treaty Rights, cultural and ceremonial practices, free prior and informed consent, traditional lands and resources including water, productive capacity of the environment, and self-determination,” the appeal said. It cites environmental racism stemming from the Army Corp’s decision not to locate the pipeline north of Bismarck over concerns it would endanger the city’s water supply, while issuing permits to trench through burial grounds and the Tribe’s main water supply. This is a direct violation of the human right to water, the appeal said.

“This submission calls attention to the urgent and worsening threats and violations of the human rights and ways of life of Standing Rock Sioux Tribe who depend greatly for their means of subsistence and their physical and cultural health upon the Missouri River,” the appeal said, citing a myriad of oil spills and leakages.

“The Dakota Access Pipeline poses an imminent threat to the Missouri River due to potential contamination by oil spills directly impacting the Tribe’s drinking water,” the appeal continued. “Based on data from a large number of oil pipelines, spills of toxic oil are a near certainty. Most experts believe it is not a matter of if but when such a spill will contaminate the ground and river water upon which the Tribe depends.”

The tribe’s protest was so successful that it led to North Dakota Gov. Jack Dalrymple declaring a state of emergency “for the purpose of protecting the health, safety and well-being of the general public and those involved in the protest.”

“The executive order can help the state and local agencies manage costs associated with providing a heightened law enforcement presence and activates the State Emergency Operations Plan to coordinate the efficient flow of resources,” read the press release.

However, the thousands of people from the Standing Rock Sioux Tribe remain peaceful — in spite of government provocation. It also raises the question as to why taxpayers are footing the bill to protect the billionaires building the pipeline.

In Iowa, similar protests against the pipeline are underway by multiple farmers who are arguing that the state’s use of eminent domain for the Dakota pipeline is in violation of federal law.

The farmers have filed a lawsuit noting that the Dakota pipeline is a private company and not a utility and that Iowa would not even have distribution points.

What this pipeline represents is the corporatocracy’s grip over the rights and property of individuals. By a simple government decree, a private corporation can usurp the property rights of individuals to bolster their bottom line.

The bravery by those standing against the government stealing their property on behalf of big oil is conveniently being ignored in the mainstream media. Please share this story with your friends and family so that they can see what fighting tyranny looks like.