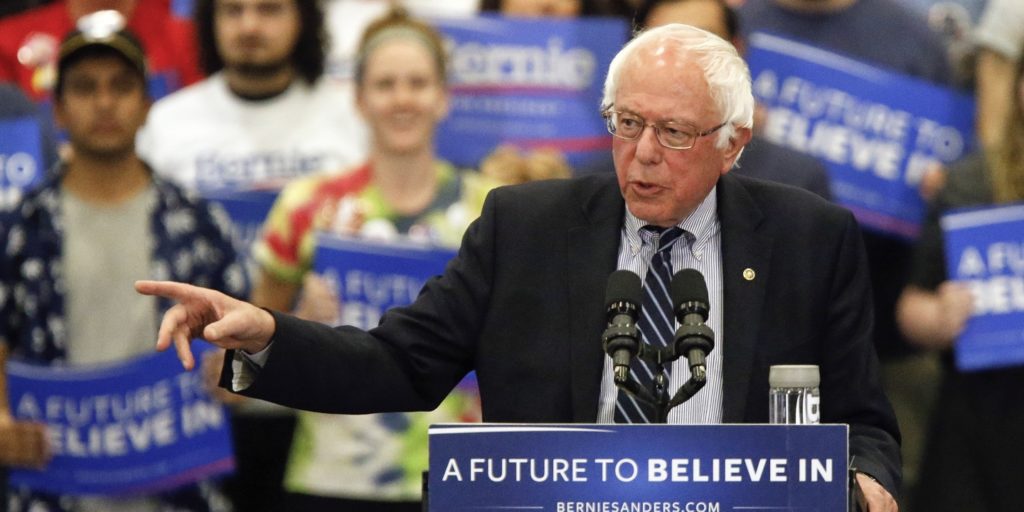 9 Aug 2016 – Vermont Senator Bernie Sanders yesterday denounced in harsh terms the impeachment of Brazil’s democratically elected president. As the Brazilian Senate heads toward a final vote later this month, Sanders described his position, set forth in a statement posted on his Senate site, as “calling on the United States to take a definitive stand against efforts to remove Brazilian President Dilma Rousseff from office.” He added: “To many Brazilians and observers the controversial impeachment process more closely resembles a coup d’état.”

Sanders also condemned the unelected center-right coalition under Michel Temer that has seized power during Rousseff’s suspension and is now trying to install themselves through 2018. “After suspending Brazil’s first female president on dubious grounds, without a mandate to govern,” he said, ” the new interim government abolished the ministry of women, racial equality and human rights” and “replaced a diverse and representative administration with a cabinet made up entirely of white men.” They are now attempting to implement radical policies that could never be democratically ratified: “impose austerity, increase privatization and install a far right-wing social agenda.”

Sanders’ statement comes as Brazil’s elites – virtually unified in favor of Dilma’s impeachment – have taken extraordinary (and almost comically futile) measures during the Olympics to hide from the domestic public, and the world, how deeply unpopular Temer is. Brazil’s largest newspaper, Folha de São Paulo, last month was caught manufacturing polling data when it claimed that 50% of Brazilians want him to stay (in fact, their own poll showed a large majority (62%) want Temer out and new elections held and the paper’s Ombudsman harshly criticized them). Brazilian media spent months hyping the prospect of Temer’s election in 2018 without mentioning the rather significant fact that he’s been banned by a court for running for 8 years because he violated election law (they were forced to mention that last week when the São Paulo prosecutor called attention to this fact in the wake of a new media movement to have Temer run).

Temer himself, fearful of intense booing, demanded that protocol be broken by not announcing his presence at the opening ceremony of the Olympics (he was intensely booed anyway when Brazilians realized he was present). Peaceful ticket-holders have been systematically and at times forcibly removed by Brazilian soldiers from Olympic events for holding “Fora Temer!” (Temer Out) signs, creating international controversy; watching the military use force to silence citizens criticizing an unelected “president” is a jarring image in a country that suffered under a 21-year military dictatorship that only ended in 1985 (a judge last night ruled such removals violate the Constitutional guarantee of free expression). 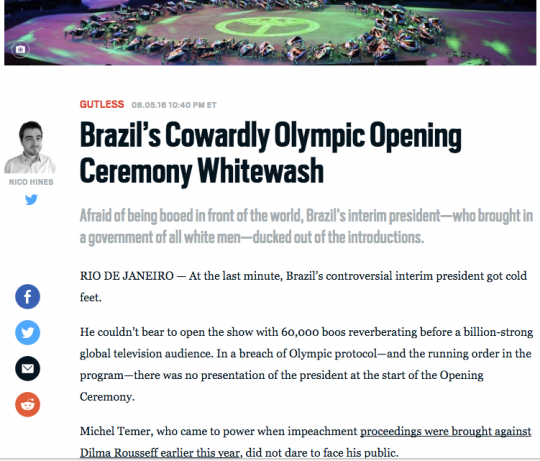 Sanders’ denunciation of Temer could not come at a worse time for the would-be unelected President. Executives from the construction giant at the heart of the Petrobras scandal, Odebrecht, told investigators this week that Temer’s Foreign Minister, José Serra, received R$ 23 million (US$ 5.5 million) in illegal funds for his 2010 presidential campaign. In just two months in office, three of Temer’s ministers have been forced to resign due to corruption scandals. Even worse, as The New York Times noted yesterday, Odebrecht executives also “told investigators that Mr. Temer [himself] had requested more than $3 million for his centrist Brazilian Democratic Movement Party. As part of a plea deal they are seeking, the Odebrecht executives said the payment had been made in cash through a unit used to deliver bribes, according to Veja, a newsmagazine.”

It’s a bit difficult to justify the removal of democratically elected President by citing corruption, when far more serious corruption scandals are engulfing the person eager to replace her along with his closest associates. But that has been the sham at the heart of this anti-democratic process from the start. As Slate‘s Franklin Foer put it in a long article on Brazil yesterday: “Dilma’s impeachment was a farce, if only for the fact that her accusers have benefited from graft on a mind-bending scale and ginned up the spectacle to distract from their own misdeeds.”

Sanders’ denunciation of the attack on Brazilian democracy is part of a growing international recognition of the illegitimacy of Temer’s rule. Just two weeks ago, “40 Democratic members of the U.S. House of Representatives published a letter … expressing ‘deep concern’ about threats to democracy in Brazil.” Similar denunciations of Dilma’s impeachment have been issued by British Labor Party leader Jeremy Corbyn, British MPs and labor leaders, the Organization of American States, dozens of members of the EU Parliament, and Brazil’s first Pulitzer Prize winner. So dubious is Temer’s standing that, as AP reported last month, many world leaders are avoiding the Rio Olympics so as to avoid the quandary of whether to shake his hand.

One question that arises from Sanders’ statement is timing: why, after months of silence on Brazil’s political crisis, did he finally speak out now? One of the significant flaws of his candidacy was that he rarely addressed foreign policy at all, notwithstanding the fact that his primary opponent is a war advocate and militarist who (even long before Trump’s emergence) was attracting neoconservative support. He was a candidate steadfastly on message. Requests had been made for Sanders by his supporters to speak out on Brazil during the primary race, but those requests were rejected or ignored.

When Sanders did speak on foreign policy, it was to offer the mildest critiques, while endorsing many of the fundamentals of the bipartisan War on Terror. There were noble exceptions – some of his statements on Israel and Palestine were among the best from any major party candidate in decades, and his refusal to repudiate some of his more controversial 1980s positions when confronted with red-baiting was impressive – but by and large, Sanders avoided any foreign policy views that could be castigated as left-wing or out of the mainstream.

Now that his presidential campaign is over, he is free to speak out in ways that would not necessarily be politically beneficial in the eyes of the Democratic Party voter base. Some of his most prominent supporters have been steadfast in their opposition to Dilma’s impeachment. Whatever the explanations on timing, Sanders’ statement is strong and unequivocal. Perhaps most significant is his call for the U.S. Government to “demand that this dispute be settled with democratic elections” – the solution which a large majority of Brazilians also support as the resolution to their political crisis, but which the country’s anti-democratic elites, fearful of who would be elected, vehemently oppose.