25 Jul 2016 – No longer it is about restoring the legitimate rights of over 370 indigenous peoples spread across 70 countries worldwide, many of them living in dire situation, but now about their central, critical role in combating climate change.

Victoria Tauli-Corpuz, the United Nations Special Rapporteur on the Rights of Indigenous Peoples has relentlessly emphasized this new reality.

“Very few countries have so far made a clear commitment to a requirement in the Paris Climate Change Agreement that countries undertaking climate change activities should ensure the rights of indigenous peoples,” she says, while reminding of “the large number of violent deaths of people protecting their forests and rights to land in 2015 – the deadliest year for environmental defenders on record.”

“It’s a dire situation in terms of respect for the rights of indigenous peoples,” she told the participants in the United Nations Food and Agriculture Organisation’s Committee on Forestry (COFO) which met in the Italian capital on July 18-22.

“Indigenous peoples across the world experience the consequences of historical colonisation and invasion of their territories, and face discrimination because of their distinct cultures, identities and ways of life,” according to UN Special Rapporteur on the Rights of Indigenous Peoples. 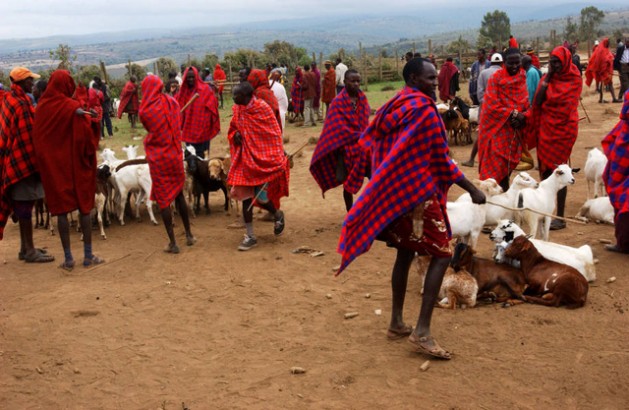 Maasai pastoralists, who participate in a farmer field school, are selling animals at a local market in Narok, Kenya. Indigenous peoples have a key role to play in addressing climate change. Credit: FAO

On this, FAO stated that “Governments must do much more to provide the enabling conditions required for indigenous peoples, local communities, smallholders and their organisations to restore degraded landscapes and achieve climate change mitigation and adaptation in practice.”

Specifically, René Castro Salazar, FAO’s Assistant-Director General warned that the issue of indigenous rights to land and territories was ‘critical’ for the success of climate change initiatives.

“Unless we help indigenous peoples achieve secure land tenure and better governance, it will be very hard to achieve long-term solutions,” Castro Salazar said. “We are lagging behind, and we need to do more.”

A third of global forests are under some form of management by families, smallholders, local communities and indigenous peoples, and represent some of the most important carbon stocks in the world, FAO reported during the meeting. Government-recognised community forests alone hold an estimated 37.7 billion tonnes of carbon stock. 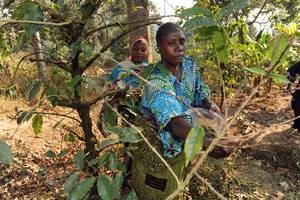 Agro-forestry farmers are tending to the crops in Kigoma, Tanzania. Forests are an integral part of the national agriculture policy with the aim of protecting arable land from erosion and increasing agricultural production. Credit: FAO

“Family smallholders, local communities and indigenous peoples have a key role to play in preserving these carbon stocks by reducing deforestation, managing forests sustainably and restoring tree cover as part of productive rural economies, particularly when they belong to strong producer organisations,” according to the UN agency.

In addition, an estimated 1.5 billion hectares of land hold potential for smallholder farmers to combine agriculture with trees.

“But failure to find the best way to engage with local stakeholders and align their interests with forest conservation can significantly compromise the chances of achieving carbon sequestration and mitigation targets.”

In an outcome statement issued at the close of the Rome meeting, participants urged governments to provide the enabling conditions required for local communities, indigenous peoples and local producers, “to manage larger territories, from securing and enforcing tenure rights to creating favourable business incentives and offering technical, financial and business extension services.”

Finally, they called for climate change initiatives “to shift towards giving greater ownership to local communities, indigenous peoples, smallholders and producer organisations and engaging them in participatory and qualitative assessment of the forest cover and trees on farms they manage.”

Livelihoods of Millions of People, Precarious

On the occasion of the Rome meeting, FAO issued a new study that helps to fill a significant knowledge gap on the presence and extent of forests and trees in the world’s drylands, where the food security and livelihoods of millions of people, already precarious, are increasingly being threatened by climate change.

The study’s preliminary findings show that trees are present with hugely varying densities on almost one-third of the world’s 6.1 billion hectares of drylands, which cover an area more than twice the size of Africa. Almost 18 per cent of this area contains forests.

An estimated 2 billion people, 90 per cent of whom are in developing countries, live in drylands. Recent studies have indicated the need to restore these areas to cope with the effects of drought, desertification and land degradation.

In particular, water availability in drylands is expected to decline further due to changes in climate and land use, the new study warns.

“Poor people living in remote rural areas will be most vulnerable to food shortages, which combined with violence and social upheaval, are already leading to forced migration in dryland regions in Africa and western Asia.”

Until now, there has been little statistically based knowledge on dryland trees –particularly those growing outside forests– despite their vital importance to humans and the environment, according to the study.

The leaves and fruit of trees are sources of food for people and fodder for animals; their wood provides fuel for cooking and heating and can be a source of income for poor households; trees protect soils, crops and animals from the sun and winds, while forests are often rich in biodiversity.

Drylands are divided into four aridity zones (see map): the dry sub-humid zone, is the least arid of the four zones and consists mostly of the Sudanian savanna, forests and grasslands in South America, the steppes of eastern Europe and southern Siberia, and the Canadian prairie.

Most dryland forests occur in this zone, as do some large irrigated, intensively farmed areas along perennial rivers; at the other extreme, the hyper-arid zone is the driest zone and it is dominated by desert – the Sahara alone accounting for 45 per cent, and the Arabian desert forming another large component.

At a glance: some preliminary findings of the FAO Global Drylands Assessment: