The Ruling Class and the Spectre of Leon Trotsky 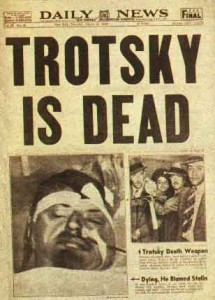 20 Aug 2016 – Seventy-six years ago today, the assassin Ramon Mercader plunged an ice axe into the head of Leon Trotsky at his home in Coyoacan, Mexico City. Gravely wounded, Trotsky valiantly fought back against his killer. He died of his injuries the following day.

The aim of the assassin’s paymaster, Soviet leader Joseph Stalin, was to silence the voice of his principal foe and so deprive the Russian and international working class of its greatest revolutionary leader.

Stalin failed. Today, the dictator’s name and that of his followers is reviled. He was, as Trotsky warned, “The grave digger of the revolution,” whereas Trotsky is forever associated with the incorruptible struggle against Stalinism and for international socialism.

Trotsky remains not only a towering historical personality, but also a figure of acute contemporary political relevance for workers the world over. This finds confirmation in the way that his name has been invoked repeatedly in the deepening crisis of the British Labour Party.

The right wing of the Labour Party, beginning on August 9 with an article in the Guardian by its deputy leader Tom Watson, is bitterly denouncing “Trotskyist entryists” and portraying all supporters of Labour’s current leader, Jeremy Corbyn, as unwitting dupes of these shadowy forces.

In the Corbyn camp, the response has been to express outrage and incredulity that such an accusation has been made—with Corbyn reassuring the Observer, “At no stage in anyone’s most vivid imagination are there 300,000 sectarian extremists at large in the country who have suddenly descended on the Labour Party [emphasis added].”

None of this has prevented Britain’s major newspapers from being inundated with articles on Trotsky, seeking to denigrate him and warn against any association with his ideas. Repeated references have been made to “Trotsky’s ghost” haunting the Labour Party and portraying the political struggle within it as one between reform and revolution.

Whatever the factional intentions of the Labour right, the emergence of Trotsky’s name to the centre stage has enormous objective significance. Indeed, whenever capitalism is gripped by crisis and an eruption of social and political conflict involving the working class, Trotsky’s presence is always felt.

Despite the declarations of his supposed “irrelevance”, the ruling elite and its media is acutely aware of the threat posed by Trotsky and Trotskyism under conditions of bitter social divisions, the political turmoil produced by the Brexit referendum and, above all, the threatened breakup of the Labour Party that has policed the struggles of the working class for more than a century.

Millions of workers and young people are looking for a means of fighting back against austerity and militarism. Corbyn’s pretence of being such an alternative, while opposing any break with the Labour Party, cannot last. The question of building a new and genuinely socialist party will inevitably arise.

The situation in Britain only expresses that which is developing the world over. The working class is moving to the left, but it has yet to build the socialist leadership it requires.

Next year is the 100th anniversary of the October 1917 revolution in Russia. Alongside Lenin, Trotsky’s name is synonymous with that epochal event that established the first workers state in the world. Today, world capitalism is once again in the grip of an escalating economic, political and social crisis that raises anew the question of whether humanity will be dragged into an era of dictatorship, barbarism and war, or whether the working class will succeed in establishing world socialism, ending class exploitation and national divisions.

Trotsky led the political fight against the degeneration of the Soviet Union under Stalin. His struggle and that of the Left Opposition, which culminated in the founding of the Fourth International in 1938, refutes the central claim of anti-communist propagandists that Lenin led to Stalin, and that socialism produced bureaucratic tyranny.

Trotsky is the author of the Theory of Permanent Revolution and of such epoch-defining phrases as “The death agony of capitalism.” He is the personal embodiment of the perspective of world socialist revolution. And as far as Britain’s ruling class and its counterparts internationally are concerned, this makes Trotsky the most toxic and dangerous figure in history.

Even after the passage of decades, Trotsky’s writings have immediate relevance. Not only did he pay close attention to the class struggle in Britain, he offered the most trenchant and scathing appraisal of the Labour Party and of its role as a defender of capitalist rule. His classic work, “Where is Britain Going?” was published in 1925, just one year before the Labour Party and the Trades Union Congress betrayed the General Strike. His writings on the Fabian left and its impotence, cant and hypocrisy, provide a salutary warning against placing any trust in Corbyn and his backers in the union bureaucracy:

They are the main prop of British imperialism and of the European, if not the world bourgeoisie. Workers must at all costs be shown these self-satisfied pedants, drivelling eclectics, sentimental careerists and liveried footmen of the bourgeoisie in their true colours. To show them up for what they are means to discredit them beyond repair. To discredit them means rendering a supreme service to historical progress.

In the next period, the burning issue that must be clarified among advanced workers and youth internationally is that of Trotsky and his political legacy. The International Committee of the Fourth International (ICFI), the world Trotskyist movement that is represented in Britain by the Socialist Equality Party, has dedicated itself to refuting what we have termed the “post-Stalinist school of historical falsification” regarding Trotsky and his life and work.

In the first decade of this century, and on the eve of the 2008 financial crash, British historians Ian Thatcher, Geoffrey Swain and Robert Service all published biographies of Trotsky. World Socialist Web Site Chairman David North conducted systematic work to expose the lies and falsifications they contained. Published in 2010 under the title In Defense of Leon Trotsky, North described their tendentious works as “pre-emptive biographies” seeking to “completely discredit Trotsky as a historical figure” on the eve of renewed revolutionary struggles.

In his introduction, North made the following observation of the motivations for all present efforts to denigrate Trotsky:

Leon Trotsky was, above all else, the great tribune and theoretician of world socialist revolution. The passions evoked by his name testify to the enduring significance of Trotsky’s ideas. Arguments about Trotsky are never simply about what happened in the past. They are just as much about what is happening in the world today, and what is likely to happen in the future.

Since these words were written, much additional ink and paper has been wasted on seeking to diminish and slander Trotsky. Yet despite these slanders and those that will follow, it has never been possible to erase his enduring presence. This is because Trotskyism is not only a spectre but a political movement. The organization that he founded, the Fourth International, is the conscious expression of deep objective tendencies that are once again bringing the working class all over the world into revolutionary struggle against the capitalist system.