A Flimflam Impeachment: The Overthrow of Dilma Rousseff

Personally incorruptible, unlike her nemeses, Dilma Rousseff was impeached and dismissed on the flimsiest of charges. 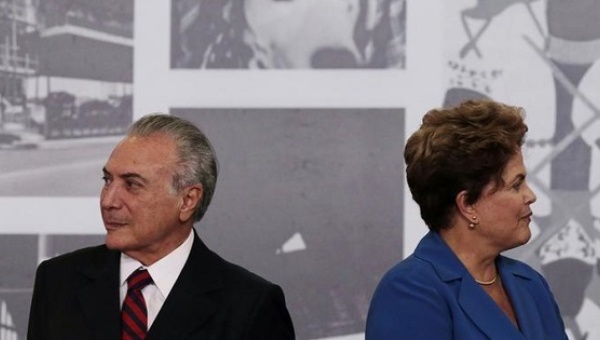 Dilma Rousseff seen next to Michel Temer during the Order of Cultural Merit ceremony at the Planalto Palace in Brasilia November 5, 2014. | Photo: Reuters

9 Sep 2016 – What did Dilma Rousseff do to warrant impeachment? According to her opponents, she falsified the accounts to exaggerate the health of the economy, a practice not uncommon among governors. In her case, a fiscal court rejected the 2014 accounting report, which under normal circumstances would have prompted a revision; instead the Senate plotters seized upon it to draw up impeachment papers.

Democracy Is Dead in Brazil

Yet Dilma still had one ace up her sleeve: Eduardo Cunha, the speaker of the Lower House. It is required by the constitution to initiate the process and he had the power to shelve the request.

Like the plotters, Mr. Cunha had ethics and corruption problems of his own and was being investigated by a house Ethics Committee for allegedly keeping secret bank accounts. Unfortunately for Dilma, three members of the Lower House from her own Workers Party, PT, decided to withdraw their support for Mr. Cunha and to vote against him in the Committee. Within hours of their announcement he had acknowledged the impeachment request.

Perhaps most striking and ironic is the absence of any personal impropriety on Ms. Rousseff’s part in contrast with her opponents. They were fighting a ticking clock as Operation Car Wash (Lava Jata) an anti-corruption investigation homed in on them. Her principal accuser Michel Temer now leading the new government has been named in two plea bargains where some top officials of Petrobras, the state-run oil company, have been accused of operating a kick-back scheme.

While Mr. Temer is not personally under direct investigation, he has been barred from running for office for eight years, stemming from campaign funding irregularities and election law violations for spending more of his personal fortune than the law permits.

Mr. Cunha, the number two in the plot against her according to Ms. Rousseff, is reported to have secreted US$5 million received in illegal kickbacks in Swiss bank accounts. His lifestyle belies his declared annual income of US$120,000. Leaked information from investigators revealed a US$40,000 splurge on a nine-day family holiday in Miami, shopping sprees in New York, Paris and Zurich, and a fleet of eight luxury cars. He resigned tearfully in July three months after commencing the impeachment proceedings in the Lower House. The house voted 367 to 137 for impeachment.

At face value the vote appears decisive but the fact is Ms. Rousseff’s party the PT does not command a majority in the House or the Senate. It relied on the support of the slightly larger PDMP (the Brazilian Democratic Movement Party) to govern. This support was withdrawn as the economy teetered and because of personal squabbles. There are moreover a host of small parties whose vote was also affected by both the economy and Dilma Rousseff’s rapidly fading poll numbers and public support.

So to the formal vote for impeachment in the Senate, the trial on Wednesday August 31, and the 61 to 20 vote for dismissal comfortably above the 54 votes required. Ms. Rousseff has since filed an appeal with the Supreme Court, an appeal not very likely to succeed as constitutional procedures were followed, and the charge though flimsy was buttressed by the fiscal court ruling.

The PT led the country for 13 years. In the decade following the election first of Lula da Silva in 2002 and 2006 and then of Dilma Rousseff in 2010, their policies reduced poverty by a record 55 percent. Income growth was triple in comparison with the previous government. Unemployment hit record lows and the real minimum wage doubled. But it had to be paid for.

After being re-elected in 2010 promising more of the same, Ms. Rousseff came face to face with reality and reversed course. The subsequent belt-tightening worsened by a slowing world economy proved her undoing.

Protest demonstrations against her policies and against what then appeared to be the profligacy of the Olympics loosened her grip. She lost support in the legislature. At the same time, the ongoing Lava Jato investigation made many legislators unhappy. Then came the fiscal court ruling and a chance for them of escape.

What’s in the future? Mr. Temer’s government is holding the reins until the next election in 2018. Corruption is endemic. Within a month of assuming office, three of Mr. Temer’s Cabinet members had resigned. Lava Jata was taking its toll.

The PT party is not without taint. Past President Lula da Silva is to stand trial for his role in the Petrobras kickback scandal—contractors bidding high for services and giving kickbacks. Mr. Lula’s lawyers claim he is innocent and the flimsy evidence is based on someone testifying against him in exchange for a lighter sentence.

Another scandal involving the PT relates to paying lawmakers for their votes. From 2005 when the story broke to 2012, 25 politicians and businessmen were convicted including senior PT members. As can be expected, the Brazilian electorate is fed up.

The economy is in depression due mostly to the worldwide slowdown affecting commodity prices, seriously undermining Brazil’s earnings from its exports of oil, iron and soya. It shrank 3.8 percent in 2015, the worst since 1981, and is expected to contract another 3.8 percent in 2016. When you hit bottom, there is nowhere to go but up. For the time being, it may be the only consolation for the temporary unelected stewards.

Dr. Arshad M. Khan is a former professor. A frequent contributor to the print and electronic media, his work has been quoted in the U.S. Congress and published in the Congressional Record.