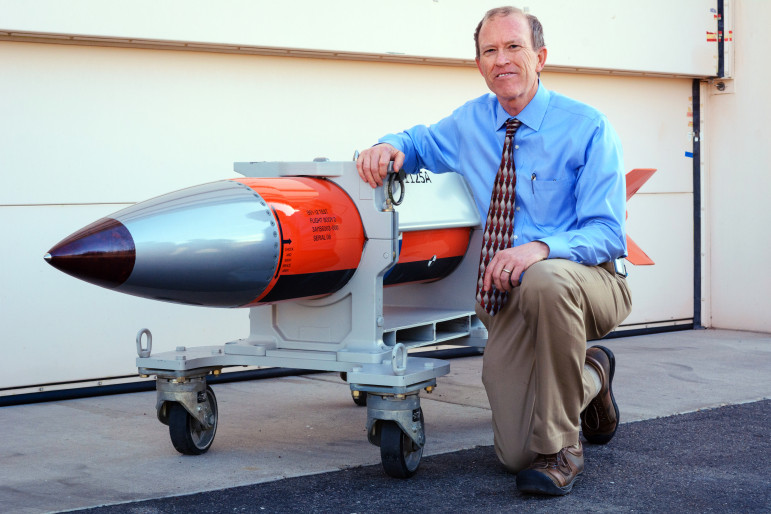 Phil Hoover, engineer and manager of the B61-12 integration project, kneels next to flight-test body of a B61-12 nuclear weapon at the Sandia National Laboratories in Albuquerque, New Mexico on April 2, 2015.
Jerry Redfern / Reveal, from The Center for Investigative Reporting

23 Aug 2016 – The most controversial nuclear bomb ever planned for the U.S. arsenal – some say the most dangerous, too – has received the go ahead from the Department of Energy’s National Nuclear Security Administration.

The agency announced on Aug. 1 that the B61-12 – the nation’s first guided, or “smart,” nuclear bomb – had completed a four-year development and testing phase and is now in production engineering, the final phase before full-scale production slated for 2020.

This announcement comes in the face of repeated warnings from civilian experts and some former high-ranking military officers that the bomb, which will be carried by fighter jets, could tempt use during a conflict because of its precision. The bomb pairs high accuracy with explosive force that can be regulated.

President Barack Obama has consistently pledged to reduce nuclear weapons and forgo weapons with new military capabilities. Yet the B61-12 program has thrived on the political and economic clout of defense contractors such as Lockheed Martin Corp., as documented in a Reveal investigation last year.

The B61-12 – at $11 billion for about 400 bombs the most expensive U.S. nuclear bomb ever – illustrates the extraordinary power of the atomic wing of what President Dwight D. Eisenhower called the “military industrial complex,” which has now rebranded itself the“nuclear enterprise.” The bomb lies at the heart of an ongoing modernization of America’s nuclear arms, projected to cost $1 trillion over the next 30 years.

In late July, 10 senators wrote Obama a letter urging that he use his remaining months in office to “restrain U.S. nuclear weapons spending and reduce the risk of nuclear war” by, among other things, “scaling back excessive nuclear modernization plans.” They specifically urged the president to cancel a new nuclear air-launched cruise missile, for which the Air Force is now soliciting proposals from defense contractors.

While some new weapons programs are farther down the road, the B61-12 bomb is particularly imminent and worrisome given recent events such as the attempted coup in Turkey. That’s because this guided nuclear bomb is likely to replace 180 older B61 bombs stockpiled in five European countries, including Turkey, which has an estimated 50 B61s stored at Incirlik Air Base. The potential vulnerability of the site has raised questions about U.S. policy regarding storing nuclear weapons abroad.

But more questions focus on the increased accuracy of the B61-12. Unlike the free-fall gravity bombs it will replace, the B61-12 will be a guided nuclear bomb. Its new Boeing Co. tail kit assembly enables the bomb to hit targets precisely. Using dial-a-yield technology, the bomb’s explosive force can be adjusted before flight from an estimated high of 50,000 tons of TNT equivalent force to a low of 300 tons. The bomb can be carried on stealth fighter jets.

“If the Russians put out a guided nuclear bomb on a stealthy fighter that could sneak through air defenses, would that add to the perception here that they were lowering the threshold for the use of nuclear weapons? Absolutely,” Hans Kristensen of the Federation of American Scientists said in the earlier Reveal coverage.

And General James Cartwright, the retired commander of the U.S. Strategic Command told PBS NewsHour last November that the new capabilities of the B61-12 could tempt its use.

“If I can drive down the yield, drive down, therefore, the likelihood of fallout, etc., does that make it more usable in the eyes of some – some president or national security decision-making process? And the answer is, it likely could be more usable.”

Len Ackland is a former newspaper reporter and editor of the Bulletin of the Atomic Scientists magazine. He wrote a book about the Rocky Flats nuclear bomb factory near Denver. This current assignment’s most haunting memory was his visit to the desert Trinity site in New Mexico where the nuclear weapons age burst upon us 70 years ago. Ackland can be reached at lenackland@gmail.com.