Israel Ramps Up House Demolitions as an Instrument of Expropriation

An increasing number of demolitions this summer.

During July–August this year, at least 2,800 Palestinians had their livelihoods affected by displacement and demolitions, with 42 communities affected over the two months. The figures for demolitions over the first 8 months of the year have increased by 50% in comparison to all of 2015. In sharp contrast, it will have taken 7 years from an Israeli state ruling agreed in 2011 (on 17 illegal Israeli outposts built on Palestinian land since 2001) to be finally fully evacuated next year. Unfortunately this is but a small success when considered alongside the 463 illegal settlement units confirmed for advancement at the beginning of this month (out of a total 2,623 new units planned this year alone, according to Peace Now). This article also outlines the stark inequality in how Israel differentiates between the need for demolitions to be used as a deterrent for Jews and Palestinians. 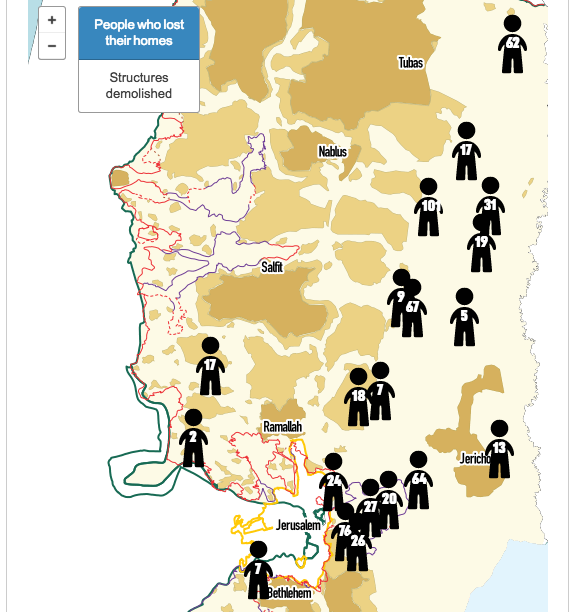 This image is from a handy interactive map produced by B’tselem that can be accessed here.

This systematic destruction of Palestinian livelihoods is explicitly linked to the advancement of new settlements, many of which are illegal under Israeli as well as International law. As Amos Gvirtz, long-standing critical Israeli peace activist and former ICAHD Chair writes in a recent article, since the 1970’s the Palestinian “population has doubled itself… but permits to construct solutions for this natural increase in population are non-existent. And thus the army forces them to violate its laws when they claim their human right to shelter.“

11 of the 28 structures destroyed in just one fateful week in August, including residential shelters, latrines and a water cistern, had previously been provided as humanitarian assistance. This brings the number of aid items destroyed or confiscated since the beginning of 2016 to 223, more than double the figure for all of 2015. Yet Netanyahu repeatedly tries to negate the existence of the Occupation and settlers, and has attempted to reframe the ongoing ethnic cleansing of Palestinians and turn it on its head. Read Jonathan Cook’s or Gideon Levy’s important articles concerning this, and remember that the next study tour in November will meet with Jonathan Cook for a briefing and field trip.

Here you can read the story of one man’s self-demolition first hand, making him, his wife and 3 young children homeless. Sometimes homes are also invaded with excessive damage caused before a demolition order is even issued, and this article documents the trend of night raids by soldiers as a method of granting the demolition orders which take a serious toll on the social and psychological well-being of Palestinians. Reactions can result in emotional numbness, feelings of anxiety, and troubled sleep, but could also extend to flashbacks, hyper-alertness, avoidance, and more. There are also others whose homes haven’t been issued a demolition notice, yet are collapsing in on them, as these pictures of cracks following Israeli excavation in Silwan near Jerusalem’s Old City testify. 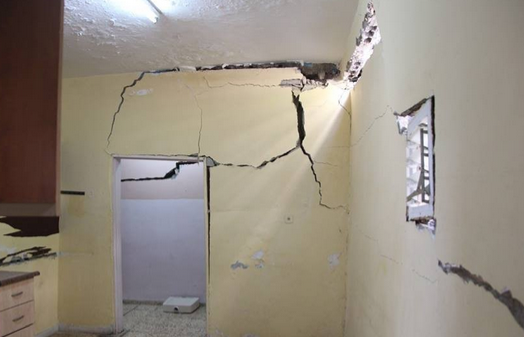 One example of many of damage to houses in Silwan

This infographic (from OCHA) below referring to the beginning of 2016 in comparison to previous years is a great way to see the increase in scale we are looking at this year: 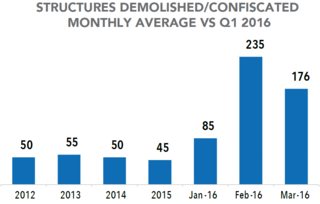 Additionally, for the first time we have seen Israel demolish a home in occupied Syrian Golan Heights, after denying building permits to locals as is traditional in I/P, and expanding settlement construction in the area. We believe that Israel will continue to act with impunity in such ways until the international community holds it to account, and this is our challenge!