Made in China: G20 and Its Geoeconomic Significance

5 Sep 2016 – What has just taken place in Hangzhou, China, is of immense geoeconomic importance. Beijing from the start treated the G20 very seriously; this was designed as China’s party, not the declining West’s. And much less Washington’s.

Outlining the agenda for the discussions, President Xi Jinping went straight to the point also geopolitically, as he set the tone: “The outdated Cold War mentality should be discarded. We urgently need to develop an inclusive, comprehensive, cooperative and sustainable new security concept.”

Acting like the de facto World Statesman-in-Chief, Xi then proceeded at the summit opening to introduce a quite ambitious package – the result of excruciating planning for months in the run-up to Hangzhou.

The package is designed to propel the global economy back to growth and at the same time install more made in China-friendly rules for global economic architecture and governance. 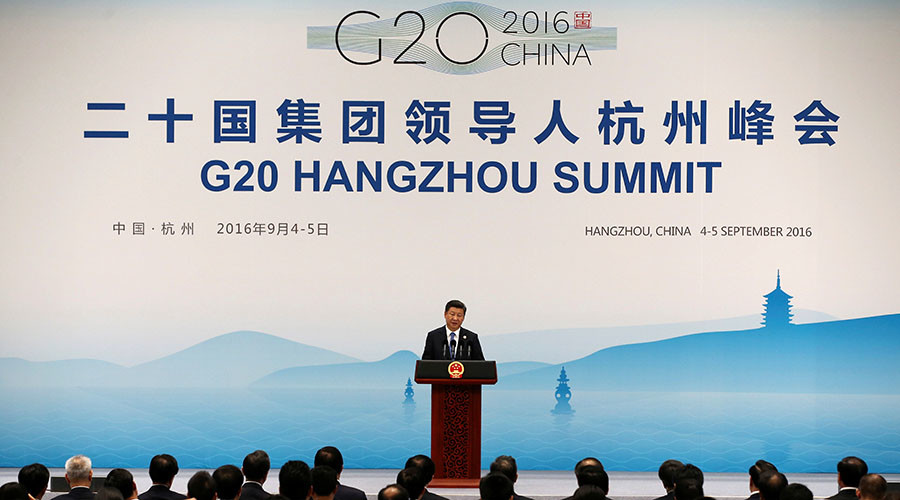 The target could not be more ambitious: to smash mounting anti-trade and anti-globalization sentiment, especially across the West (from Brexit to Trump), simultaneously pleasing his select audience – arguably the most significant gathering of world leaders in China’s history – yet at the same time, in the long run, aiming at prevailing over US-led Western dominance for good.

That’s a predictable but still remarkable turnaround for China, which benefited like any other nation from globalization – with growth over the past three decades mostly propelled by foreign direct investment and a deluge of exports.

Yet now geoeconomics has reached an extremely worrying zone of turbulence. Since the end of the Cold War in 1989 – and of “history” itself, according to academic simpletons – it’s never bee so dire. Greed led globalization to be “defeated”by inequality. In a nutshell, low inflation – due to global competition – led to the proverbial “expansionary” monetary policies, which inflated housing, education and health care, squeezing the middle class and allowing unlimited wealth flowing to a 1 percent minority of asset owners.

Yet even in de-acceleration, China was responsible for more than 25 percent of global economic growth in 2015. It remains the key global turbine – while at the same time carrying the self-attributed burden of being the representative of the Global South in global economic governance.

China’s outbound investment surged 62 per cent to a record US$100 billion in the first seven months of 2016, according to China’s Ministry of Commerce. But there’s a problem, which economists have dubbed “asymmetric investment environment”: China remains more closed than other BRICS members to foreign investment, especially in service sectors.

The BRICS-dedicated meeting on the sidelines of the G20 was not spectacular per se. But that’s where Xi detailed China’s G20 agenda and set the tone for their 8th annual summit in Goa next month. According to a report by the BRICS Economic Think Tank at Tsinghua University in Beijing, China must improve these multilateral connections to “have a bigger say and push the West to step back on international rule making”.

It’s a long shot – but it’s already in progress. Zhu Jiejin, from Fudan University in Shanghai, sums it all up; “BRICS is a test of China’s new philosophy in international relations – although the fruit will take a long time to ripen.”

Watch politicians in different light: World leaders as they are during #G20 https://t.co/3wuyikDFEs pic.twitter.com/tyGGx8U3nE

Everything in Hangzhou was calculated to the millimeter.

Take, for instance, the seats at the G20 table; classic Ming dynasty tai-shi chairs (“the seats for imperial grand masters”) with soft grey cushions; paper scrolls with light green jade paperweights at either end; a pottery plate with a pen; a green porcelain teacup; a square jade “seal” – almost as large as an imperial seal – which was in fact a microphone switch.

And take the geopolitics of the official picture; Merkel and Erdogan stood close to Xi because Turkey hosted the G20 last year, and in 2017 it’s Germany; perfect symmetry for Putin and Obama; perfect symmetry for two other BRICS members, India’s Modi and Brazil’s Temer The Usurper – at the extremities, but still first row; Japan’s Shinzo Abe in the second row – as well as Italy’s Renzi and Britain’s Theresa “we’re open for business” May.

And why Hangzhou, for that matter? This being China, it all starts with a historical analogy. Hangzhou has been described as “the Homestead of Silk” even before the development of the ancient Silk Road. Now connect it to Xi’s immensely ambitious New Silk Roads – or One Belt, One Road (OBOR) in their official denomination – which some Chinese analysts revel in describing as “a modern symphony of connectivity.”

OBOR is in fact Xi’s “four prescriptions” in practice; economic growth driven by a frenzy of “inclusive” connectivity, especially among developing nations.

The Beijing leadership is totally committed to OBOR as the ultimate geoeconomic transformative drive in Asia-Pacific, tying most of Asia to China – and to Europe; and all of this of course totally intertwined with Xi’s turbo-charged reinterpretation of globalization. That’s why I argue that this is the most overreaching project for the young 21st century: the competing “project” by the US is more of the chaotic same.

Even before Hangzhou, the G20 Finance Ministers and Central Bank Governors met in Chengdu on July 23-24, to discuss global infrastructure connectivity. The communiqué had to state the obvious; greater interconnectivity is a defining demand of the 21st century global economy and the key to promoting sustainable development and shared prosperity.

This is what OBOR is all about. Chinese consultancy company SWS Research estimated in an OBOR report that the overall investment needed for infrastructure construction is close to an astonishing $3.26 trillion.

Showcase projects include the China-Pakistan Economic Corridor (CPEC), defined by Chinese foreign minister Wang Yi as “the first movement of the symphony of the Belt and Road Initiative”. And then there’s the high-speed railway bonanza – including everything from the China-Thailand railway within the Trans-Asia Railway network as well as the Jakarta-Bandung high-speed railway in Indonesia.

The house that Ma built

These are the top Chinese players behind OBOR expansion and Xi’s vision of a reformed global economic architecture. It’s impossible to understand where China is heading without considering the role of each and one of them.

And of course there’s Hangzhou itself – a tech hub excelling in information economy and intelligent manufacturing.

Arguably the greatest star of this G20, apart from Xi, was Jack Ma, the founder of e-commerce giant Alibaba, established in 1999, listed in New York in 2014 and the embodiment of the several thousand Chinese companies that form the new“Chinese imprint”.

Alibaba’s HQ is in Hangzhou. And not by accident everyone – from Canada’s Justin Trudeau to Indonesia’s Joko Widodo – visited the company’s Xixi campus, guided by Ma, with an eye to promoting their nation’s products through the platform of Alibaba. Nearby there’s Dream Town – a center that helped spring up more than 680 Chinese startups in just a year.

Before the G20 there was a B20 – a business summit, focused on the development of small and medium enterprises (SMEs) – where wily Ma, admitting “we are living at a crucial time when people dislike globalization or free trade”, forcefully promoted the advent of an electronic world trade platform, eWTP. Ma described eWTP as “a mechanism for public-private dialogue in the development of cross border e-trade”, which will “help small and medium-sized enterprises, developing countries, women and the young generation participate in the global economy.”

Also not by accident, Indonesia’s Widodo invited Ma to be an economic advisor. Indonesia has no less than 56 million SMEs, as the President noted; so one of his priorities is to boost the cooperation between SMEs in Indonesia and Alibaba to help them enter the Chinese and global market.

Of course all it’s not a rose garden. Among the five task forces at the B20 we could find dodgy players such as Laurence Fink, head of mega-fund BlackRock, sitting at the finance committee, or Dow Chemical at commerce and investment. Still, the key – lofty – target was and remains to help SMEs in the developing world to go global.

What was really decided at the G20 will only become visible long-term. Xi closed the summit stressing the G20 has agreed to promote trade multilateralism and go against protectionism (ample evidence to the contrary, as it stands), while at the same time developing the first framework rules for cross-border investment (will everyone implement them?)

He also said the G20 agreed to continue reform of the IMF and the World Bank to give more say to emerging markets (not with Hillary or Trump in power).

China’s “message” anyway was unmistakable; it has set a geoeconomic path for the future and it’s lobbying hard for scores of nations to join on a win-win framework. And whatever the future of the graphically confrontational “pivot to Asia”– the TPP “NATO on trade” arm included – Beijing won’t sit silent to US intimidation, or threats to what it considers China’s vital security interests.

The G20 in Hangzhou showed China is ready to show off its economic clout and to exercise a much more active role in geoeconomics. It’s clear that Beijing’s prefers to play the game in a multilateral trade system based around the WTO. Washington, instead, has been trying to rig the game with new “rules”; TPP and TTIP.

He Weiwen, from the China Society for WTO Studies, may have hit the nail on the (trading) head when he observed, “The US said earlier that it can’t let China set the rules, but it seems its own rule-setting isn’t wining hearts as it only sees its own interests.”