The White House decided to support armed rebels in Syria despite intelligence warnings forecasting the rise of the Islamic State.

7 Aug 2016 – In Al Jazeera’s latest Head to Head episode, former director of the Defense Intelligence Agency Michael Flynn confirms to Mehdi Hasan that not only had he studied the DIA memo predicting the West’s backing of an Islamic State in Syria when it came across his desk in 2012, but even asserts that the White House’s sponsoring of radical jihadists (that would emerge as ISIL and Nusra) against the Syrian regime was “a willful decision.” [Lengthy discussion of the DIA memo begins at the 8:50 mark.]

Amazingly, Flynn actually took issue with the way interviewer Mehdi Hasan posed the question—Flynn seemed to want to make it clear that the policies that led to the rise of ISIL were not merely the result of ignorance or looking the other way, but the result of conscious decision making: 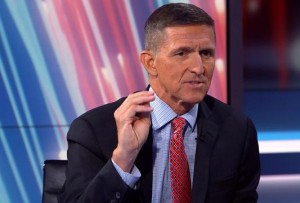 Hasan: You are basically saying that even in government at the time you knew these groups were around, you saw this analysis, and you were arguing against it, but who wasn’t listening?

Flynn: I think the administration.

Hasan: So the administration turned a blind eye to your analysis?

Hasan: A willful decision to support an insurgency that had Salafists, Al Qaeda and the Muslim Brotherhood?

Flynn: It was a willful decision to do what they’re doing.

Hasan himself expresses surprise at Flynn’s frankness during this portion of the interview. While holding up a paper copy of the 2012 DIA report declassified through FOIA, Hasan reads aloud key passages such as, “there is the possibility of establishing a declared or undeclared Salafist principality in Eastern Syria, and this is exactly what the supporting powers to the opposition want, in order to isolate the Syrian regime.”

Rather than downplay the importance of the document and these startling passages, as did the State Department soon after its release, Flynn does the opposite: he confirms that while acting DIA chief he “paid very close attention” to this report in particular and later adds that “the intelligence was very clear.”

Lt. Gen. Flynn, speaking safely from retirement, is the highest ranking intelligence official to go on record saying the United States and other state sponsors of rebels in Syria knowingly gave political backing and shipped weapons to Al-Qaeda in order to put pressure on the Syrian regime:

Hasan: In 2012 the U.S. was helping coordinate arms transfers to those same groups [Salafists, Muslim Brotherhood, Al Qaeda in Iraq], why did you not stop that if you’re worried about the rise of quote-unquote Islamic extremists?

Flynn: I hate to say it’s not my job…but that…my job was to…was to ensure that the accuracy of our intelligence that was being presented was as good as it could be.

The early reporting that treated the DIA memo as newsworthy and hugely revelatory was criticized and even mocked by some experts, as well as outlets like The Daily Beast. Yet the very DIA director at the time the memo was drafted and circulated widely now unambiguously confirms the document to be of high value, and indicates that it served as source material in his own discussions over Syria policy with the White House.

As Michael Flynn also previously served as director of intelligence for Joint Special Operations Command (JSOC) during a time when its prime global mission was dismantling Al-Qaeda, his honest admission that the White House was in fact arming and bolstering Al-Qaeda linked groups in Syria is especially shocking given his stature.

Consider further the dissonance that comes with viewing the Pentagon’s former highest ranking intelligence officer in charge of the hunt for Osama bin Laden now calmly and coolly confessing that the United States directly aided the foot soldiers of Ayman al-Zawahiri beginning in at least 2012 in Syria.

This confirmation is significant to my own coverage of the DIA report, as I was contacted by a number of individuals who attempted to assure me that the true experts and “insiders” knew the document was unimportant and therefore irrelevant within the intelligence community and broader Syria policy.

This began after a Daily Beast article entitled The ISIS Conspiracy That Ate the Web  cited former NSA officer John Schindler as an expert source. Schindler concluded of the DIA document: “it’s difficult to say much meaningful about it… Nothing special here, not one bit.”

To my surprise, only hours after I published a rebuttal of Schindler and the Daily Beast article, I was contacted by a current high level CIA official who is also a personal friend from my time living in the D.C. area.

This official, who spent most of his career with CIA Public Affairs, made a personal appeal urging me to drop my comments attacking John Schindler’s credibility, as I had noted that Schindler is a highly ideological and scandal-laden commentator who consistently claims special insider knowledge in support of his arguments. This CIA official further attempted to convince me of Schindler’s credibility as an insider and expert, assuring me that “he has written insightfully.”

Mehdi Hasan’s historic interview with General Flynn should put the issue to rest—the declassified DIA report is now confirmed to be a central and vital source that sheds light on the origins of ISIS, and must inform a candid national debate on American policy in Syria and Iraq.

As it is now already becoming part of the official record on conflict in Syria among respected international historians, knowledge of the declassified document must make it into every American household.

Brad Hoff served as a Marine from 2000-2004 at Headquarters Battalion, Quantico. After military service he lived, studied, and traveled throughout Syria off and on from 2004-2010. He is Managing Editor of LevantReport.com and currently teaches in Texas.