It is a custom-made warship without guns, pimped out with bigger engines and a long-distance fuel tank.

21 Sep 2016 – Anti-whaling activists Sea Shepherd have a brand new, $12 million custom-built ship they boast will for the first time match the speed and endurance of Japan’s whaling fleet.

And with Japan’s defiance of an international court ruling about to be in the spotlight at a global summit next month, the activists plan to sail the new vessel to Australia, before launching south in a bid to disrupt the summer whale hunt near Antarctica. 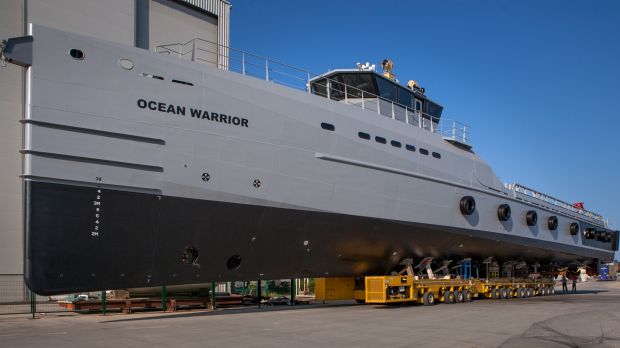 “So this is a vessel that they cannot catch.”

Christened Ocean Warrior, it is the first brand new ship Sea Shepherd has built, allowing the activist group to specify engine size and other features for its controversial high-seas protests.

All its other ships have been refitted older vessels, the Bob Barker once a Norwegian whaling ship, built in 1950, the Steve Urwin a former fisheries vessel operating from Scotland, built in 1975.

Ironically, for an environmental group that only serves vegan meals aboard, the design of Ocean Warrior is based on a popular supply ship for off-shore oil rigs. 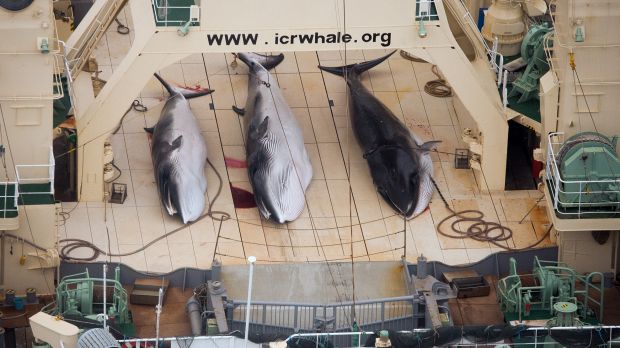 Cargo space has been converted to fuel tanks to give the ship longer range.

Japan killed 333 minke whales last summer – the first hunt after a 2014 ruling in the International Court of Justice that declared the so-called “scientific whaling” to be illegal. 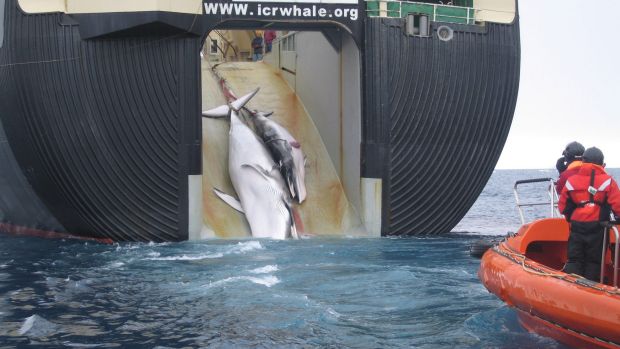 Two minke whales, possibly a mother and calf, are hauled aboard the Nisshin Maru in 2008. Photo: Australian Customs

But Japan has since exempted itself from the court’s jurisdiction and drawn up new guidelines for whaling, effectively doubling the size of the hunting grounds in the Southern Ocean and the activist group was not able to track the whalers last summer.

The Japanese institute for whale research has also run a website to promote whale recipes.

Australia joined with 95 countries earlier this month to condemn Japan’s resumption of whaling, and the issue is expected to dominate a meeting of the International Whaling Commission in Slovenia in October.

Sea Shepherd won’t yet disclose the top speed of Ocean Warrior but said it comfortably topped 30 knots in recent sea trials in the Mediterranean.

This speed, the group says, will allow it to catch Japan’s harpoon ships and it can land a helicopter on board, potentially extending its tracking options.

The ship was funded with a charity grant from proceeds of the Dutch postcode lottery, and Sea Shepherd’s aim is to show Japan killing whales – and disrupt the slaughter if they can.

“The way that we see it is that the international community has now had two years to ensure that Japan complies with the law. They haven’t done so.”

“Our position is that the international community has failed the whales, so that gives us no other option than to head down [to the Southern Ocean].”

The Ocean Warrior is presently on its maiden voyage to Amsterdam for a launch with Dutch lottery and will then sail to Australia in the next month to a port to be determined, either Fremantle, Melbourne or Hobart.

Daniel Flitton is senior correspondent for The Age covering foreign affairs and politics. He is a former intelligence analyst for the Australian government and was at one-time a university lecturer specialising in international relations.