The Big Difference at Standing Rock Is Native Leadership All Around

Dallas Goldtooth, a veteran organizer of the Keystone XL fight, is amazed at the historic support from tribes at Standing Rock–even tribes that rely on resource extraction. 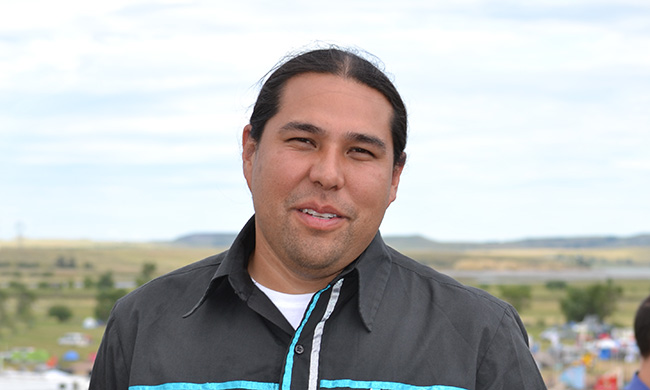 Dallas Goldtooth is the Keep It In The Ground campaign organizer for the Indigenous Environmental Network. Photo by Sarah van Gelder.

11 Sep 2016 – This year’s massive buildup of resistance to the Dakota Access pipeline follows closely on the heels of the victory over Keystone XL pipeline, something often credited to feverish organizing by 350.org. But years before 350’s involvement, there was the Indigenous Environmental Network, which launched that movement and its “Keep It In the Ground” messaging. This time, with nearly 200 tribes unified behind the Standing Rock tribe’s opposition to the pipeline and more than 3,000 people gathered at the Standing Rock Sioux reservation, Native Americans are clearly leading the movement.

The encampment at Standing Rock are filled with prayers and ceremonies, and the spiritual core to this movement gives it resilience and power. The courage and clarity of the stand to protect our water is attracting support across the nation and around the world.

I came to Standing Rock to cover the arrival of Northwest tribal canoes and stayed for the rulings Friday on whether construction of the pipeline can continue. I spoke to Dallas Goldtooth, a veteran of the Keystone XL movement, on a hill overlooking the camp. Goldtooth (Mdewakanton Dakota and Dińe) is the Keep It In The Ground campaign organizer for the Indigenous Environmental Network.

Dallas Goldtooth: We can only focus on this cherished moment that we have with each other. And the organizing continues. One thing that the uncertainty provides is this constant drive to see what else can we do to change the social dial toward our direction and change the conversation. I think slowly it’s happening, it’s coming. Standing Rock has now entered into the national narrative in some ways, in some places, so how can we further that?

van Gelder: I just asked a woman from the Oglala Nation if she’d ever seen anything like this. She said not since 1973 at Wounded Knee. Tell me how you see this in a historic context.

Goldtooth: I’ve talked to folks who were there, who are in this camp. At its very most there were about 200 people at Wounded Knee at its peak, and a lot of those were people who came in for the weekend and left. At its peak in this camp, we reached up to 3,500 people. People that traveled across the country. They carpooled, hitchiked. They organized caravans and buses. It’s magnificent to see that. It makes me think how different it would have been if we had had Facebook in 1973.

This is a special moment in the climate justice movement. We’ve had significant wins: Keystone XL. The Cherry Point coal terminal, another win in support of treaty rights. I’m looking forward to what happens next. There are people very committed—through nonviolent direct action, through legal strategies, through social movement strategies—to make sure we see a win in this case, too.

van Gelder: This is a pretty big moment for treaty rights and for indigenous folks standing together.

Goldtooth: It is. I don’t think there has ever been as large a mobilization and a unified, unilateral Indian Country support like this. We’ve had chairmen, traditional chiefs, chairwomen, the leaders of the leaders of Indian Country, who have come to this camp. Also, we’ve had a lot of non-Native allies that are 100 percent supportive of the fight and struggle here because they see the connections. This fight right now, it’s about the water. And because the messaging is that water is life, so many people can connect with that. Whether you’re native or non-Native, whether you’re from Chicago or Detroit or New Orleans or up in the Bakken, we all understand the importance of protecting the water. That brings us together.

Indigenous Environmental Network, our organization, has been fighting Dakota Access for about two years, when they first applied for the state permits. In South Dakota, we were intervening in the Keystone XL stuff, and we saw Dakota Access come up. So we intervened on behalf of Standing Rock at the time. And even back then we had the Tribal Historic Preservation Office testify saying the court is not consulting with us: “We have not been consulted. There are sacred sites out there that they missed.” And that was two years ago. And look where we’re at now.

van Gelder: How many different tribal governments have come here to take an official stand?

Goldtooth: One hundred eighty-nine have had resolutions or statements of solidarity with Standing Rock. That’s amazing, historic. The crazy part is a lot of tribes that are heavily dependent on resource extraction have also come out in support. Three Affiliated Tribes—30 percent of the Bakken oil shale is under their lands and they participate in. The Navajo Nation, who is heavily dependent on coal. The Crow Nation, which is all coal. All sent statements of solidarity and actually brought their presidents to this camp. It’s fascinating. It opens up a door for so more organizing to say, “Hey, you’re standing in solidarity with Standing Rock on this issue, can you stand in solidarity to keep fossil fuels in the ground, because that’s what really promotes projects like this.”

van Gelder: These issues around the destruction of the planet and the climate crisis affect everybody, and yet it’s Native people who have really been at the forefront of getting stuff done.

How do you think about that?

Goldtooth: The “Keep It in the Ground” narrative is nothing new for indigenous peoples. The language “keep it in the ground” we first encountered over 15 years ago from relatives in the Global South—in Central and South America—and relatives up in northern Alberta in Canada, who were saying: The only solution forward is to keep it in the ground; regulation is not going to work; a more sustainable method of extraction is not going to work. We indigenous people have been saying keep fossil fuels in the ground from the get-go. Although it has been frustrating to see the climate movement overall be slow to adopt that, it’s also amazing and welcome now.

It is indigenous people who are often – though not all the time –on the frontlines of climate change. It is oftentimes indigenous people, poor people, forest-dependent nations, water-dependent nations—they’re the first ones to feel the rapid sea-level rise. Those communities, those nations are still dependent on subsistence lifestyles; they’re living off the land. Our relatives in the Arctic are feeling it, their entire livelihoods. Even if they wanted to have absolutely traditional food diets, they can no longer do that because the animals’ life patterns are completely altered.

So we at the Indigenous Environmental Network stand in strong defense and support of those communities’ rights to self-determine what happens to the lands, water, to the world around them. And not only are the frontlines the source of the fight, but that’s where the solutions are going to come from.

Goldtooth: The best part of the work we do is that it’s not what we’re fighting against but what we’re fighting for. We advocate for localized, small-scale renewable energy production. The same with food production, localized and sustainable. That’s the path forward that we have to take. The process to achieve that is all housed under the concepts of a just transition: We have to be mindful that even if we transition to 100 percent renewables, it doesn’t necessarily mean that society is just, it doesn’t necessarily guarantee that poor communities will have access to basic needs. When we talk about this transition, we have to make sure it’s in line with the principles of social justice and environmental justice.

van Gelder: It’s seems that there’s a values shift that may be happening, that indigenous folks are modeling, that there’s something more important than industrial production.

Goldtooth: There is some truth to the fact that indigenous communities in their traditional formats are often good models. When they’re in line with their original instructions, they’re often good examples of what healthy sustainable stewardship looks like, of what healthy relationships look like. We have to really encourage our allies, ourselves, to renew that relationship, to relearn how we enjoy and experience and communicate with the world around us and each other.

Sarah van Gelder is co-founder and editor at large of YES! Magazine. She writes articles and conducts interviews for YES!, and she speaks regularly about solutions journalism, grassroots innovations, and social change movements. Her forthcoming book is The Revolution Where You Live: Stories from a 12,000-Mile Journey Through a New America. Follow her on twitter @sarahvangelder.