Washington Post Makes History: First Paper to Call for Prosecution of Its Own Source (After Accepting Pulitzer)

18 Sep 2016 – Three of the four media outlets that received and published large numbers of secret NSA documents provided by Edward Snowden — The Guardian, the New York Times, and The Intercept –– have called for the U.S. government to allow the NSA whistleblower to return to the U.S. with no charges. That’s the normal course for a news organization, which owes its sources duties of protection, and which — by virtue of accepting the source’s materials and then publishing them — implicitly declares the source’s information to be in the public interest.

But not the Washington Post. In the face of a growing ACLU and Amnesty-led campaign to secure a pardon for Snowden, timed to this weekend’s release of the Oliver Stone biopic “Snowden,” the Post editorial page today not only argued in opposition to a pardon, but explicitly demanded that Snowden — the paper’s own source — stand trial on espionage charges or, as a “second-best solution,” accept “a measure of criminal responsibility for his excesses and the U.S. government offers a measure of leniency.”

In doing so, the Washington Post has achieved an ignominious feat in U.S. media history: the first-ever paper to explicitly editorialize for the criminal prosecution of its own source — one on whose back the paper won and eagerly accepted a Pulitzer Prize for Public Service. But even more staggering than this act of journalistic treachery against the paper’s own source are the claims made to justify it.

The Post editors concede that one — and only one — of the programs that Snowden enabled to be revealed was justifiably exposed — namely, the domestic metadata program, because it “was a stretch, if not an outright violation, of federal surveillance law, and posed risks to privacy.” Regarding the “corrective legislation” that followed its exposure, the Post acknowledges: “We owe these necessary reforms to Mr. Snowden.” But that metadata program wasn’t revealed by the Post, but rather by The Guardian. 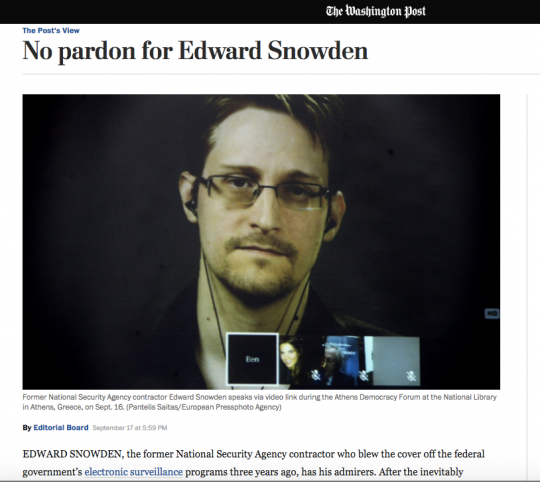 Other than that initial Snowden revelation, the Post suggests, there was no public interest whatsoever in revealing any of the other programs. In fact, the editors say, real harm was done by their exposure. That includes PRISM, about which the Post says this:

The complication is that Mr. Snowden did more than that. He also pilfered, and leaked, information about a separate overseas NSA Internet-monitoring program, PRISM, that was both clearly legal and not clearly threatening to privacy. (It was also not permanent; the law authorizing it expires next year.)

In arguing that no public interest was served by exposing PRISM, what did the Post editors forget to mention? That the newspaper that (simultaneous with The Guardian) made the choice to expose the PRISM program by spreading its operational details and top-secret manual all over its front page is called … the Washington Post. Then, once they made the choice to do so, they explicitly heralded their exposure of the PRISM program (along with other revelations) when they asked to be awarded the Pulitzer Prize. 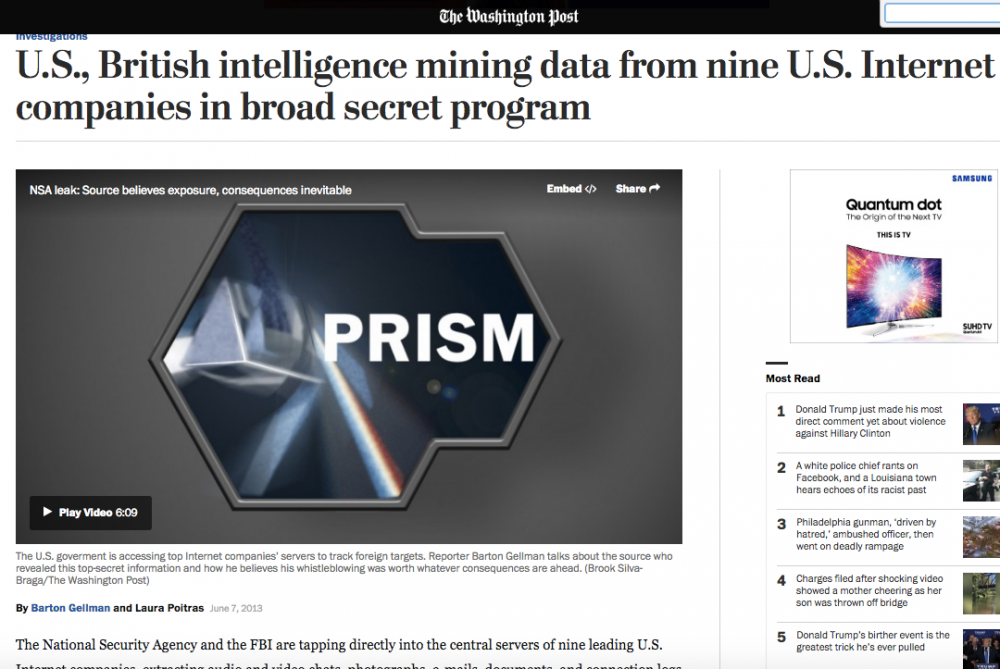 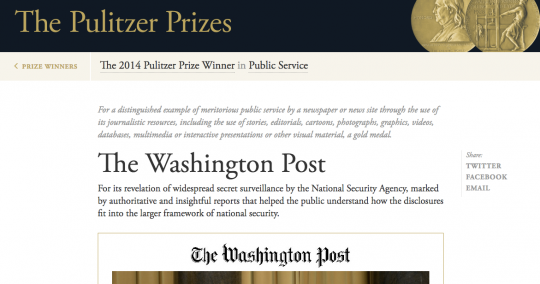 If the Post editorial page editors really believe that PRISM was a totally legitimate program and no public interest was served by its exposure, shouldn’t they be attacking their own paper’s news editors for having chosen to make it public, apologizing to the public for harming their security, and agitating for a return of the Pulitzer? If the Post editorial page editors had any intellectual honesty at all, this is what they would be doing — accepting institutional responsibility for what they apparently regard as a grievous error that endangered the public — rather than pretending that it was all the doing of their source as a means of advocating for his criminal prosecution.

Worse than the intellectual dishonesty of this editorial is its towering cowardice. After denouncing their own paper’s PRISM revelation, the editors proclaim: “Worse — far worse — he also leaked details of basically defensible international intelligence operations.” But what they inexcusably omit is that it was not Edward Snowden, but the top editors of the Washington Post who decided to make these programs public. Again, just look at the stories for which the Post was cited when receiving a Pulitzer Prize:

Almost every one of those stories entailed the exposure of what the Post editors today call “details of international intelligence operations.” I personally think there were very solid justifications for the Post’s decision to reveal those. As Snowden explained in the first online interview with readers I conducted, in July 2013, he was not only concerned about privacy infringement of Americans but of all human beings, because — in his words — “suspicionless surveillance does not become okay simply because it’s only victimizing 95 percent of the world instead of 100 percent. Our founders did not write that ‘We hold these Truths to be self-evident, that all U.S. Persons are created equal.’”

So I support the decision of the Post back then to publish documents exposing “international intelligence operations.” That’s because I agree with what Post Executive Editor Marty Baron said in 2014, in an article in the Washington Post where they celebrated their own Pulitzer:

Post Executive Editor Martin Baron said Monday that the reporting exposed a national policy “with profound implications for American citizens’ constitutional rights” and the rights of individuals around the world (emphasis added). “Disclosing the massive expansion of the NSA’s surveillance network absolutely was a public service,” Baron said. “In constructing a surveillance system of breathtaking scope and intrusiveness, our government also sharply eroded individual privacy. All of this was done in secret, without public debate, and with clear weaknesses in oversight.”

The editorial page is separate from the news organization and does not speak for the latter; I seriously doubt the journalists or editors at the Post who worked on these news stories would agree with any of that editorial. But still, if the Post editorial page editors now want to denounce these revelations, and even call for the imprisonment of their paper’s own source on this ground, then they should at least have the courage to acknowledge that it was the Washington Post — not Edward Snowden — who made the editorial and institutional choice to expose those programs to the public. They might want to denounce their own paper and even possibly call for its prosecution for revealing top-secret programs they now are bizarrely claiming should never have been revealed to the public in the first place.

But this highlights a chronic cowardice that often arises when establishment figures want to denounce Snowden. As has been amply documented, and as all newspapers involved in this reporting (including the Post) have made clear, Snowden himself played no role in deciding which of these programs would be exposed (beyond providing the materials to newspapers in the first place). He did not trust himself to make those journalistic determinations, and so he left it to the newspapers to decide which revelations would and would not serve the public interest. If a program ended up being revealed, one can argue that Snowden bears some responsibility (because he provided the documents in the first place), but the ultimate responsibility lies with the editors of the paper that made the choice to reveal it, presumably because they concluded that the public interest was served by doing so.

Yet over and over, Snowden critics — such as Slate’s Fred Kaplan and today’s Post editorial — omit this crucial fact, and are thus profoundly misleading. In attacking Snowden this week, for instance, Kaplan again makes the same point he has made over and over: that Snowden’s revelations extended beyond privacy infringements of Americans.

Leave aside the narcissistic and jingoistic view that whistleblowers and media outlets should only care about privacy infringements of American citizens, but not the 95 percent of the rest of the planet called “non-Americans.” And let’s also set to the side the fact that many of the most celebrated news stories in U.S. media history were devoted to revealing secret foreign operations that had nothing to do with infringing the constitutional rights of U.S. citizens (such as the Pentagon Papers, Abu Ghraib, and the Post’s revelations of CIA black sites).

What’s critical here is that Kaplan’s list of Bad Snowden Revelations (just like the Post’s) invariably involves stories published not by Snowden (or even by The Intercept or The Guardian), but by the New York Times and the Washington Post. But like the Post editorial page editors, Kaplan is too much of a coward to accuse the nation’s top editors at those two papers of treason, helping terrorists, or endangering national security, so he pretends that it was Snowden, and Snowden alone, who made the choice to reveal these programs to the public. If Kaplan and the Post editors truly believe that all of these stories ought to have remained secret and have endangered people’s safety, why are they not attacking the editors and newspapers that made the ultimate decision to expose them? Snowden himself never publicly disclosed a single document, so any programs that were revealed were the ultimate doing of news organizations.

Whatever else may be true, one’s loyalty to U.S. government officials has to be slavish in the extreme in order to consider oneself a journalist while simultaneously advocating the criminalization of transparency, leaks, sources, and public debates. But that’s not new: There has long been in the U.S. a large group that ought to call itself U.S. Journalists Against Transparency: journalists whose loyalty lies far more with the U.S. government than with the ostensible objectives of their own profession, and thus routinely take the side of those keeping official secrets rather than those who reveal them, even to the point of wanting to see sources imprisoned.

But what makes today’s Washington Post editorial so remarkable, such a tour de force, is that the editors are literally calling for the criminal prosecution of one of the most important sources in their own newspaper’s history. Having basked in the glory of awards and accolades, and benefited from untold millions of clicks, the editorial page editors of the Post now want to see the source who enabled all of that be put in an American cage and branded a felon. That is warped beyond anything that can be described.