Every day, The New York Times – America’s “paper of record” – sinks deeper into the swamp of propaganda, now reliably touting predictable neocon notions about the Middle East and Russia.

4 Oct 2016 – The New York Times’ downward spiral into a neoconservative propaganda sheet continues with another biased lead article, this one on how the Syrian war has heightened U.S.-Russia tensions. The article, bristling with blame for the Russians, leaves out one of the key reasons why the partial ceasefire failed – the U.S. inability to separate its “moderate” rebels from Al Qaeda’s jihadists.

The article, written by Michael R. Gordon and Andrew E. Kramer (two of the paper’s top national security propagandists), lays the fault for the U.S. withdrawal from Syrian peace talks on Russian leaders because of their “mistrust and hostility toward the United States,” citing a comment by former White House official Andrew S. Weiss.

Gordon and Kramer then write that the cessation of hostilities agreement came undone because of the “accidental bombing of Syrian troops by the American-led coalition and then because of what the United States claimed was a deliberate bombing by Russian aircraft and Syrian helicopters of a humanitarian convoy headed to Aleppo.” (The Times doesn’t bother to note that the Russians have questioned how “accidental” the slaughter of 62 or so Syrian troops was and have denied that they or the Syrian government attacked the aid convoy.)

The article continues citing U.S. intelligence officials accusing Russia and Syria of using indiscriminate ordnance in more recent attacks on rebel-held sections of Aleppo. “Unfortunately, Russia failed to live up to its own commitments,” said a State Department statement, according to Gordon and Kramer.

However, left out of the article was the fact that the U.S. government failed to live up to its commitment to separate U.S.-backed supposedly “moderate” rebels from Al Qaeda’s Nusra Front, which has recently changed its name to the Levant (or Syria) Conquest Front. By contrast, this key point was cited by Rupert Murdoch’s Wall Street Journal, which noted:

“Russia has complained that Washington wasn’t upholding its end of the bargain by failing to separate U.S.-backed Syrian rebels from more extremist groups tied to al Qaeda.”

Doubling Down with Al Qaeda

Indeed, The Wall Street Journal has actually done some serious reporting on this crucial topic, publishing an article from Turkey on Sept. 29, saying: “Some of Syria’s largest rebel factions are doubling down on their alliance with an al Qaeda-linked group, despite a U.S. warning to split from the extremists or risk being targeted in airstrikes.

U.S.-backed Syrian “moderate” rebels smile as they prepare to behead a 12-year-old boy (left), whose severed head is held aloft triumphantly in a later part of the video. [Screenshot from the YouTube video]

“The rebel gambit is complicating American counterterrorism efforts in the country at a time the U.S. is contemplating cooperation with Russia to fight extremist groups. It comes after a U.S.-Russia-brokered cease-fire collapsed last week and the Syrian regime and its Russian allies immediately unleashed a devastating offensive against rebel-held parts of Aleppo city that brought harsh international condemnation. …

“The two powers have been considering jointly targeting Islamic State and the Syria Conquest Front — formerly known as the al Qaeda-linked Nusra Front — a group that is deeply intermingled with armed opposition groups of all stripes across Syria’s battlefields. The U.S. has also threatened to attack any rebels providing front-line support to the group. …

“Some rebel groups already aligned with Syria Conquest Front responded by renewing their alliance. But others, such as Nour al-Din al-Zinki, a former Central Intelligence Agency-backed group and one of the largest factions in Aleppo, said in recent days that they were joining a broader alliance that is dominated by the Front. A second, smaller rebel group also joined that alliance, which is known as Jaish al-Fateh and includes another major Islamist rebel force, Ahrar al-Sham. …

So, it should be clear that a major obstacle to the agreement was the failure of the U.S. government to persuade its clients to break off alliances with Al Qaeda’s operatives, a connection that many Americans would find deeply troubling. That public awareness, in turn, would undermine the current neocon P.R. campaign to get the Obama administration to supply these rebels with anti-aircraft missiles and other sophisticated weapons, or to have U.S. warplanes destroy the Syrian air force in order to impose a “no-fly zone.”

Since the start of the Syrian conflict in 2011, the powerful role of Al Qaeda and its spinoff, the Islamic State, has been a hidden or downplayed element of the narrative that has been sold to the American people. That storyline holds that the war began when “peaceful” protesters were brutally repressed by Syria’s police and military, but that version deletes the fact that extremists, some linked to Al Qaeda, began killing police and soldiers almost from the outset.

However, since The New York Times is now a full-time neocon propaganda sheet, it does all it can to hide such troublesome realities from its readers, all the better to jazz up the hatred of Syria and Russia. 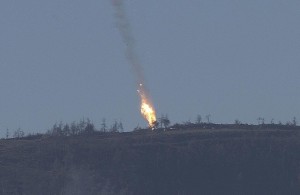 Video of the Russian SU-24 exploding in flames inside Syrian territory after it was shot down by Turkish air-to-air missiles on Nov. 24, 2015.

As the Times and the Journal both made clear in their articles on Tuesday, the neocon agenda now involves providing more American armaments to the rebels either directly through the CIA or indirectly through U.S. regional “allies,” such as Saudi Arabia, Qatar and Turkey.

Though pitched to the American people as “humanitarian” assistance needed to shoot down Syrian and Russian planes, the arming-up of the rebels will likely extend the war and the bloodletting even longer while strengthening Al Qaeda and the Islamic State,.

If the new U.S. weapons prove especially effective, they could even lead to the collapse of the Syrian government and bring about the neocons’ long-desired “regime change” in Damascus. But the ultimate winners would likely be Al Qaeda and/or the Islamic State, which could be expected to follow up with the mass slaughter of Christians, Alawites, Shiites, secular Sunnis and other “heretics.”

More likely, however, the U.S.-supplied weapons would just cause the war to drag on indefinitely with an ever-rising death toll. But don’t worry, the dead will be blamed on Vladimir Putin and Bashar al-Assad.

Although never mentioned in the mainstream U.S. media, the delivery of weapons to these Syrian rebels/terrorists are a clear violation of international law, an act of aggression and arguably a crime of aiding and abetting terrorists.

International law is something that the Times considers sacrosanct when the newspaper is condemning a U.S. adversary for some violation, but that reverence disappears when the U.S. government or a U.S. “ally” is engaged in the same act or worse.

So, it is understandable why Gordon and Kramer would leave out facts from their story that might give Americans pause. After all, if the “moderate” rebels are in cahoots with Al Qaeda, essentially serving as a cut-out for the U.S. and its “allies” to funnel dangerous weapons to the terror organization that carried out the 9/11 attacks, Americans might object.

Similarly, if they were told that the U.S. actions violate international law, they might find that upsetting, too, since many Americans aren’t as coolly hypocritical as Official Washington’s neocons and liberal war hawks.

Beyond the devolution of The New York Times into a neocon propaganda organ, Gordon and Kramer have their own histories as propagandists. Gordon co-wrote the infamous “aluminum tube” story in September 2002, launching President George W. Bush’s ad campaign for selling the Iraq War to the American people. Gordon also has gotten his hands into disinformation campaigns regarding Syria and Ukraine. 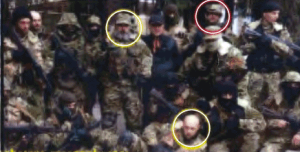 Photograph published by the New York Times purportedly taken in Russia of Russian soldiers who later appeared in eastern Ukraine. However, the photographer has since stated that the photo was actually taken in Ukraine, and the U.S. State Department has acknowledged the error.

For instance, Gordon and Kramer teamed up on a bogus lead story that the State Department fed to them in 2014 about photographs supposedly taken of soldiers in Russia who then turned up in other photos in Ukraine – except that it turned out all the photos were taken in Ukraine, destroying the premise of the story and forcing an embarrassing retraction. [For more on that screw-up, see Consortiumnews.com’s “Another NYT-Michael Gordon Special?”]

For his part, Kramer has been a central figure in the Times’ anti-Russian propaganda regarding Ukraine. [See Consortiumnews.com’s “NYT Is Lost in Its Ukraine Propaganda.”]

So, between the Times’ neocon institutional bias – and the apparent personal agendas of key correspondents – one can expect very little in the way of balanced journalism when the topics relate to the Middle East or Russia.