What we have seen is the Middle East and large parts of North Africa on the receiving end of death, destruction and displacement over the last 15 years. 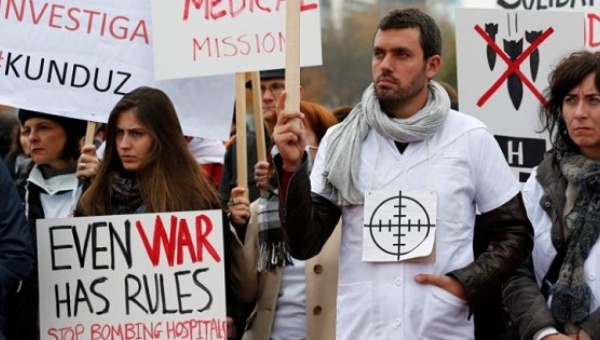 The staff of Medecins Sans Frontieres (MSF), also known as Doctors Without Borders, demonstrates in Geneva, Switzerland November 3, 2015, one month after the U.S. bombing of their charity-run hospital in Kunduz in Afghanistan. | Photo: Reuters

12 Oct 2016 – The 15th anniversary of the war in Afghanistan — a war with no foreseeable end in sight —  quietly passed by unnoticed Friday by major U.S. media.

RELATED: Despite Civilian Deaths, US Pushes Normalizing Global Drone Use

The number of troops due to remain in Afghanistan has been raised 50 percent to 8,400. Drones based in Pakistan continue to play their deadly role. On the anniversary date, attacks on security checkpoints in the Chashma area of Maiwand district in the southern part of Kandahar province resulted in a gun battle lasting several hours. Afghan officials concede three soldiers died and four were wounded. The Taliban claim the surrender of an entire battalion and one tank.

As incongruous as it might appear in hindsight, there was much talk of “nation building” in the Bush years. What we have seen instead are a Middle East and large parts of North Africa on the receiving end of death, destruction and displacement, on a scale unheard of since the World War II. Afghanistan, Iraq, Libya, Sudan, Somalia, Syria, Yemen, even Ukraine are fractured states, the ensuing misery for their citizens a natural consequence.

Iraq is back in the news again not just for the reinsertion of U.S. forces, but also for a new planned battle to recapture Mosul from the Islamic State group — a battle likely to be another hell for its Sunni citizens who probably do not relish a return of the now essentially Shia Iraqi military.

Sectarianism, Balkanization of states, a rendering of the delicate fabric of these multi-ethnic, multi-religious societies may not have been the stated aim but are certainly the aftermath. The fact is when the same scenario is repeated time and again, many see it as the goal of U.S. policy disguised in platitudes. Hence the ill-will toward U.S. citizens across a wide swathe of lands running from North Africa to India. It is a sobering prospect in an inter-connected world.

The most troubling aspect of the Afghanistan war is one basic irrefutable fact: Neither the Afghan people nor their government had any involvement in the 9/11 attack. Yes, Osama bin Laden was a guest in the country, but only because he had helped in repelling the Soviet invasion. The Afghan government requested evidence, the U.S. reply: surrender him or else. To neighboring Pakistan Richard Armitage delivered the notorious line, “we’ll bomb you back into the stone age,” according to then President Pervez Musharraf.

Were there no other alternatives to full-scale war? How about a police action targeting bin Laden’s group? Or, for a peaceful solution, how about the possibility of surrender to an international tribunal that would have guaranteed no death penalty. He claimed to be a leader conducting war, and, it is fair to say, many other wartime leaders have ordered far worse. A guest in a world where honor is important might have been obliged to accept such surrender terms, but certainly not the demands of a revanchist superpower intent on his execution.

The war made enemies out of friends, and left nuclear armed Pakistan considerably less stable by importing religious extremism — bombings and terror attacks, once almost unheard of are now quite common.

RELATED: Iraqi Group to Sue US for 2003 Invasion

Based on lies, as the Chilcot report in Britain affirms, the Iraq war was even more egregious and has left unimagined problems in its wake. Given these experiences and Libya to boot, one would have thought arming jihadi groups — wasn’t the Osama bin Laden experience enough — was playing with fire. But here we are again: the U.S. fighting a secular government in Syria that was never a threat, and trying to replace it with jihadis who harbor a visceral hatred toward it.

The logic that prevails is also of powerful Washington insiders, who, too, harbor visceral hatreds but cloak their arguments. Who ever heard of killing people to save them?

Dr. Arshad M Khan (http://ofthisandthat.org/index.html) is a former Professor, whose comments over several decades have appeared in a wide-ranging array of print and electronic media including The Christian Science Monitor, The Dallas Morning News, Dawn (Pakistan), Forth Worth Star Telegram, Asia Times Online, Countercurrrents, Counterpunch, Pambazuka News, teleSUR, and many others.