2 Nov 2016 – November is a painful month in the Palestinian calendar. It is dotted with commemorative days that have one theme in common: the partitioning of Palestine.

Today is the 99th anniversary of the Balfour declaration. Although it did not offer partition, it sowed the seeds for it, which eventually allowed the Zionist movement to take over Palestine.

On November 15, we commemorate the Palestinian Declaration of Independence (issued by the Palestinian National Council (PNC)), which was a reluctant national Palestinian consent to partition, notwithstanding the injustice and criminality involved in such an act.

At the end of the month, on the 29th, we commemorate the UN General Assembly Resolution 181, which recommended in 1947 the partition of Palestine into two states.

Put into the right chronological sequence, we can see a direct line between the 1917 Balfour Declaration, the 1947 UN partition resolution and the 1988 PNC’s document. It is worth our while to re-read Edward Said’s wise words about the Balfour Declaration.

“What is important about the Declaration is, first, that it has long formed the juridical basis of Zionist claims to Palestine, and second, more crucial for our purposes here, that it was a statement whose positional force can only be appreciated when the demographic, or human realities of Palestine are clearly understood. For the Declaration was made (a) by a European power (b) about a non-European territory (c) in a flat disregard of both the presences and the wishes of the native majority resident in that territory, and (d) it took the form of a promise about this same territory to another foreign group, that this foreign group might, quite literally, make this territory a national home for the Jewish people.”

In fact, it was more than that: It allowed a settler colonial movement, appearing very late in history, to envisage a triumphant project even before it set proper foot in the land or had a meaningful geographical and demographic presence there. 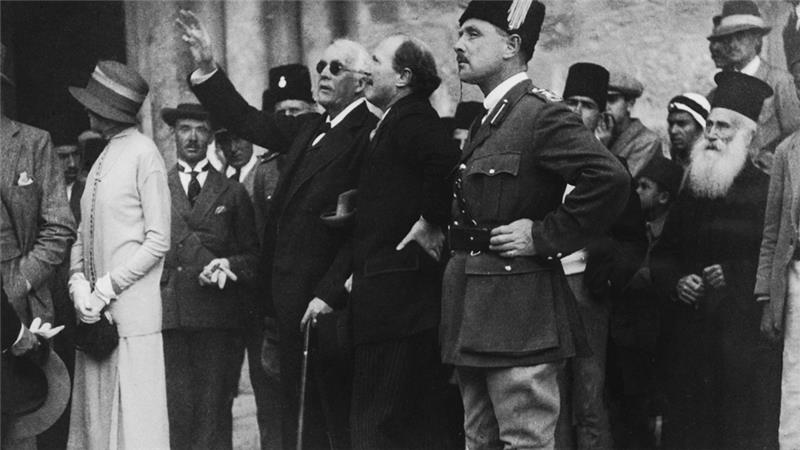 British politician Lord Arthur Balfour points out a feature of the Church of the Holy Sepulchre to Governor Sir Ronald Storrs during a visit to Jerusalem, April 1925 [Getty]

‘The Logic of the Elimination of the Native’

The native population in Palestine was much better equipped than the American Indians or Aborigines to deal with the danger of Zionism when it had just arrived.

They also had far better understanding of self-determination and nationhood than any of the other indigenous people at the time.

In 1917, the Palestinians inhabited their homeland almost exclusively and possessed most of its lands. Only with the help of British bayonets could the settler colonial project of Zionism survive in its early stages through the Palestinian uprisings of 1920, 1921, 1929 and, in particular, 1936.

The British army employed immense force, which included the Royal Air Force, to quell the 1936 Palestinian uprising. It lasted for three years and ended with the British elimination of the Palestinian national leadership, either by killing or by exiling.

This was the main legacy of the Balfour project: not its hallowed text but the policy that ensued in its wake, leading eventually to the catastrophe of 1948.

There were British officials at home and on the ground who had second thoughts and qualms about the alliance with Zionism. They had their say when the British government despatched a Royal Inquiry Commission to examine the origins of the 1936 revolt.

The commission hoped to rectify some of the injustice by suggesting partition between the settlers and the native population.

The Zionist leadership urged the British to transfer the Palestinians from any area that would be accorded to the Zionist settlers, but this was something London refused to do.

However, by legitimising partition in Palestine as a “solution” with international credibility, Britain associated this geographical arrangement clearly with the basic impulse of any settler colonial movement, the one so brilliantly defined by the late Patrick Wolfe as “the logic of the elimination of the native”.

The Arab world supported the Palestinian rejection and hoped at first through diplomatic means to change it. When it became clear during the first of months of 1948 that the ethnic cleansing of Palestine began in earnest, Arab public opinion demanded more from its governments.

With such a blessing, no wonder that, henceforth, partition and ethnic cleansing in Zionist thought and practice went hand in hand.

When the British cabinet announced its decision to leave Palestine at the beginning of February 1947, and referred the future of the country to the UN, the historical opportunity arose to fuse once more partition with transfer of population.

This time, the Zionist leadership did not seek international legitimacy for the transfer; they sought it only for the partition. It assumed correctly that partition, in particular two years after the Holocaust, would be accepted internationally as a just, moral and reasonable solution. 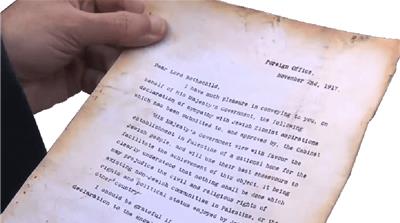 The natural Palestinian rejection of the notion of dividing their homeland with settlers, the majority of whom had arrived only few a years earlier, fell on deaf Western ears.

Locating the Jews in Palestine, without the need to come to terms with what Europe did to them in World War II, became the easiest corridor out of Europe’s ugliest historical moment.

As is clear today from the documents, the Zionist leadership regarded the partition resolution as both international legitimisation for a Jewish state in Palestine, and the Palestinian rejection of it as a valid pretext for the ethnic cleansing of the native population.

OPINION: Israel-Palestine – A way to end the occupation

The Arab world supported the Palestinian rejection and hoped at first through diplomatic means to change it. When it became clear during the first of months of 1948 that the ethnic cleansing of Palestine was beginning in earnest (by the beginning of May, most Palestinian towns were depopulated and some wiped out entirely by the Zionist forces), Arab public opinion demanded more from its governments.

The last straw was the Deir Yassin massacre of April 1948. In its wake, the Arab League began to coordinate a large-scale military operation to stop the destruction of Palestine.

Not all the Arab leaders were genuinely interested in this goal, and not one of them was willing to throw into the campaign a meaningful military force.

The result was a total defeat by the Israeli forces, which continued, without any international rebuke or intervention, the ethnic cleansing of the Palestinians.

Two areas remained outside Israel’s reach: the Gaza Strip and the West Bank. Not because Israel at the time lacked the power to occupy them, but because its leaders decided that the West Bank was a demographic liability and the Gaza Strip could serve as a huge receptor for the hundreds of thousands of refugees Israel pushed out south of Jaffa and Jerusalem.

However, ever since 1948, a lobby had been operating in Israel demanding the occupation of these last bits of Palestine. The opportunity came in 1967.

Soon after it became clear that, at least for some of the Israelis, this was not a welcome development: Occupying the lands of millions of Palestinians proved an unexpected political headache and for a while a financial burden.

Thus the Israeli peace camp was born wishing to control these two areas from the outside and grant them autonomy, and later some members of the movement were even willing to call the areas a state.

At the same time, settlers, with and without government blessing, began to colonise the West Bank and the Gaza Strip.

As in 1936, so in 1987, an oppressed people tried to shake off the colonial project. This time there was some positive international reaction which the Palestinian Liberation Organization (PLO) was hoping to galvanise for the cause. It seemed that even the US in the post-Cold War era might change its attitude.

American blessing came with a price – a demand that the PLO would acknowledge the partition of Palestine and accept the loss of almost 80 percent of the homeland.

The Declaration of Independence navigated between the pragmatism required and loyalty to the moral and basic principles of the liberation movement. Partition was recognised both as a crime and a fait accompli.

Despite the historical injustice done to the Palestinian Arab people in its displacement and in being deprived of the right to self-determination following the adoption of General Assembly Resolution 181 (II) of 1947, which partitioned Palestine into an Arab and a Jewish State, that resolution nevertheless continues to set preconditions to international legitimacy that guarantee the Palestinian Arab people the right to sovereignty and national independence.

This might have worked had partition been a genuine strategy or vision of the settler state of Israel. However, conceding demographic exclusivity and total geographical ownership is an unthinkable scenario for any settler colonial project. The aim is to displace the natives and replace them; or, as Edward Said put it so well, substituting presence with absence.

From the Israeli/Zionist perspective, partition can only be a means of completing the project of settler colonialism; it can never be used for limiting or forsaking the project.

Thus, the Declaration of Independence did not affect the reality on the ground, and neither did all the next international, regional or local attempts to resell the idea of partition as a “two states solution”.

The discourse on partition continued, while the reality of settler colonialism covered now almost every inch of historical Palestine.

November is a good month to ponder why partition, described in American parlance as the best way of keeping neighbours happy, equates occupation, colonisation and ethnic cleansing.

The seeds were sown in 1917, reaped in 1947 and poisoned the country ever since. It is time to adopt a fresh moral and political view on this history for the sake of a better future.

Ilan Pappe is the director of the European Center of Palestine Studies at the University of Exeter. He has published 15 books on the Middle East and on the Palestine Question.