Dying to Get to Europe 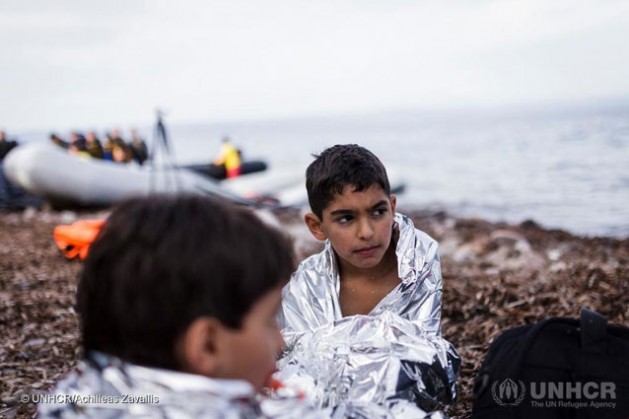 At least 3,740 refugees and migrants have died crossing the Mediterranean in 2016 – why is the route so deadly? Credit: UNHCR

29 Oct 2016 – They are not just data or numbers for statistical calculations. They are desperate human beings fleeing wars, violence, abuse, slavery and death. They hear and believe the bombastic speeches about democracy and human rights and watch the many images of welfare and good life in Europe.

They are so desperate that trusting the promises of human traffickers comes almost naturally to them. After all these human traffickers are the very people who lure them to the ‘promised land.’ They sell whatever they can of their modest belongings, including agricultural land, borrow money from their poor family members to deliver cash to the inhumane smugglers for their journey abroad.

But then many, too many of them die in their attempts. The death toll of those crossing the Mediterranean has now, once again, hit an all-time high.

With just two months to the end of 2016, and despite a substantial drop in the number of migrants and refugees attempting to cross the Mediterranean, the number of people losing their lives has witnessed a three-fold overall increase this year and, in one particular route, by more than five-fold, the United Nations refugee agency has just reported.

“From one death for every 269 arrivals last year, in 2016 the likelihood of dying has spiralled to one in 88,” William Spindler, a spokesperson for the Office of the UN High Commissioner for Refugees (UNHCR), on 25 October informed.

“On the Central Mediterranean route between Libya and Italy the likelihood of dying is even higher, at one death for every 47 arrivals,” he added. The grim ratio for this route has worsened by more than 5.7-times. “This is the worst we have seen.”

According to the UN refugee agency, at least 3,740 lives are reported lost between January and October 2016 – just short of the 3,771 deaths reported for the whole period of 2015.

After a three-month odyssey to join her husband, including giving birth to twins in a Serbian hospital, Fatima Khalouf found sanctuary in a German village. Fatima Khalouf (right). Credit: UNHCR/Gordon Welters

This high loss of life comes despite a large overall fall this year in the number of people seeking to cross the Mediterranean to Europe. Last year at least 1,015,078 people made the crossing. This year so far, crossings stand at 327,800.

“About half those who have crossed the Mediterranean so far this year have travelled from North Africa to Italy – a known more perilous route,” said Spindler explaining one of the causes behind the rise.

Other causes include people smugglers using lower-quality “vessels” – no more than flimsy inflatable rafts that often do not last the journey; and the changing tactics of smugglers, with mass embarkations of thousands of people at a time on these boats of death, Spindler said.

There are many horror stories behind the changing tactics of people smugglers. Around five years ago, it was reported that traffickers used to ‘buy’ scrapping ships in the so called “Death Coast” on Africa’s South-Eastern shore, fill them with refugees and migrants, hire industrial fishing vessels to drag them until North West Africa and then unclasp them as soon as they detect the presence of coastal patrols.

Add to this, last summer’s reports about purposely defective life vests, which the smugglers provided to refugees and migrants in order to intentionally let them sink as they approach European coasts, a tactic that would push humanitarian groups and coastal authorities to rush to rescue them.

Tragically, the number of those who lose their lives while trying to reach Europe is higher than those who managed to arrive in this continent.

In fact, less than 300,000 migrants and refugees have reached Europe between the start of this year and mid-September, with most of them entering through Greece and Italy, according to an update from the International Organization for Migration (IOM) on 13 September.

“While total arrival numbers are down, fatalities among Mediterranean migrants and refugees now stand, through this past weekend, at 3,207 – exceeding by 456 the total recorded during the same period last year.”

IOM noted that, according to its Missing Migrants Project – which tracks deaths of migrants and those who have gone missing along migratory routes worldwide – Mediterranean fatalities for last year stood at 2,751 through 12 September 2015.

Ironically, the IOM, which assisted an estimated 20 million migrants in 2015, was founded in the wake of the World War II to resettle refugees from Europe.

But, what awaits them in Europe? At first, alleging humanitarian sentiments, the European Union (EU) auctioned them—after all they are a cheap labour or working force and they meticulously pay taxes.

Shortly after, due to electoral motivations, the EU decided to “sell” them back to Turkey, a country that the European club had systematically considered unsafe and inappropriate human rights wise, but that all of sudden decided that it was safe … for refugees and migrants.

Perhaps one of the most unerving analysis is what IPS founder Roberto Savio wrote already a year ago: Paris, the Refugees and Europe:

“In the short term, Europeans will probably lose the benefits of the Schengen agreement: free circulation inside Europe. France has re-established border controls, as have Sweden, Germany and Slovenia. Hungary built a fence to protect its border with Serbia, and now Austria is doing the same…

… And, if Europe becomes a fortress and closes its borders, thousands of refugees will remain blocked in the Balkans, exasperating an already difficult situation. Eastern Europe has made clear that they will resist EU quotas…

… But the EU plan of resettlement of 120,000 men and woman, has so far resettled a grand total of 327 people all over Europe. The chairman of EU, Jean-Claude Juncker, has calculated that at this speed it will take until 2100 to implement the plan.”

That is just so true.

Otherwise, the UNHCR would not have so strongly stated, “Highlighting that the number of pledges to relocate asylum-seekers continues to be ‘woefully low’ and its implementation slow and challenging, the United Nations refugee agency called on European countries to do more to deliver significantly on the commitments they have made.”

The UNHCR on 13 September last year informed that both the EU and the UN member states agreed on a two-year plan to relocate 160,000 asylum-seekers, mainly from Greece and Italy, to other European countries.

“However, until now only 4,776 asylum-seekers have been relocated from the two countries – less than three per cent of the original target.”

Meanwhile, migrants and refugees continue to dream of a life in Europe, while swelling the coffers of human traffickers, which are already full with an estimated 65 billion dollars a year. Also meanwhile, Europe continues to talk about human rights.