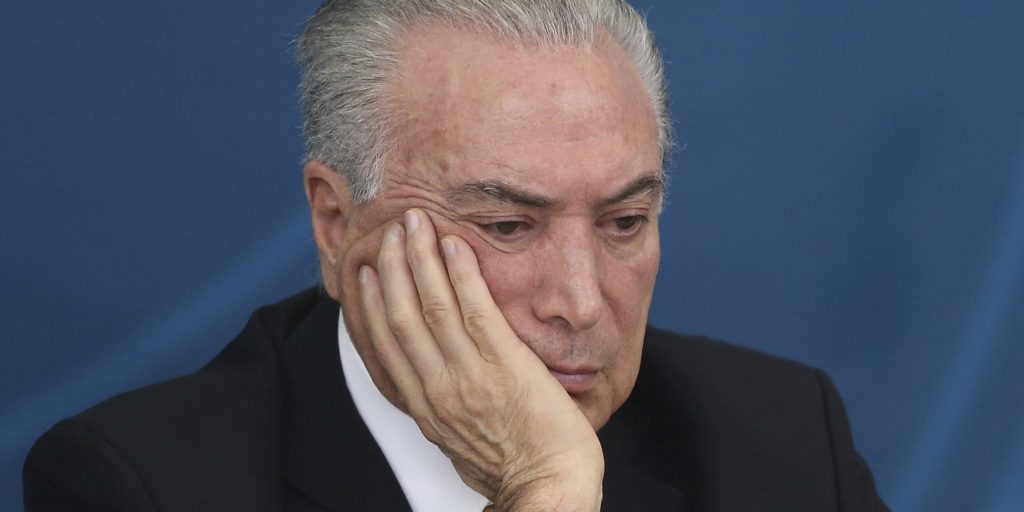 25 Nov 2016 – A primary argument made by opponents of impeaching Brazilian president Dilma Rousseff was that removing her would immediately empower the truly corrupt politicians in Brasília – the ones who were the driving force behind her impeachment – and they would then use that power to kill ongoing corruption investigations and shield themselves from consequences for their own law-breaking. In that regard, Dilma’s impeachment was not designed to punish corruption but to protect it. The last two weeks have produced new corruption scandals that have vindicated that view beyond what even its proponents imagined was possible.

In his short time in office, Temer has already lost five ministers to scandal, but these new controversies are the most serious yet. One major scandal involves an effort in Congress – led by the very parties that impeached Dilma, with the support of some in Dilma’s party – to pass a law that vests themselves full legal amnesty for their crimes involving election financing. In late September, a bill appeared in Congress, seemingly out of nowhere, that would have retroactively protected any member of Congress from being punished for the use of so-called “caixa dois” (second box) monies in campaigns, whereby politicians receive under-the-table contributions from oligarchs and corporations that they do not declare.

Many of Brazil’s most powerful politicians – including its Foreign Minister, a majority of members of the lower House, and installed President Michel Temer himself (pictured above) – are implicated in this scheme and are thus threatened with the possibility of prosecution. “Caixa dois” has been a key tactic used to bribe politicians. The issue has taken on particular urgency because the imprisoned billionaire CEO of the nation’s construction giant Odebrecht, Marcelo Odebrecht, is about to finalize his plea agreement, and it will identify numerous key figures as having received millions of dollars in such undeclared donations.

It has already been reported that Temer’s Foreign Minister, José Serra, received R$ 23 million ($7 million) in such illegal funds from Odebrecht, much of which was deposited into a Swiss Bank account to avoid detection (those funds were for his losing 2010 presidential campaign against Dilma, showing how those who lost democratically and are mired in serious corruption are the ones who have now seized power due to Dilma’s impeachment).

When this amnesty bill first appeared in September, it was done in such a way to prevent anyone from noticing, or finding out who was responsible. At the time, The Intercept Brasil described it as a move that “shocked even the most longtime, jaded observers of corrupt Brasília plotting.” That effort failed when two left-wing parties, PSOL and Rede, blew the whistle and impeded parliamentary efforts that would have enabled quick enactment (as disclosure: my husband, David Miranda, was elected to Rio’s City Council last month on a PSOL ticket). But as we ended our September article by noting: “Convinced of their own entitlement and ability to act without consequence, there is no doubt they will try again to lavish themselves with amnesty while nobody is looking.”

That time is now, except that they are doing it out in the open. Because virtually every party has major figures implicated by this illegal campaign scheme, most parties are openly united in support of this amnesty, on the theory that if they all act together, it won’t be pinned on any one of them and nobody can be politically punished (while most large parties are overwhelmingly behind it, PT’s delegation is split almost evenly on it, and the same two left-wing parties that impeded it the first time are fully opposed).

But the dominant group in the Congress is the one that led the impeachment battle and is now loyal to Temer, and they – composed of a huge number of members endangered by this “caixa dois” lawbreaking – can ensure that this amnesty will pass. Temer himself has signaled that he will not veto it, and his party, PMDB, is largely supportive of it. The vote was scheduled for last week but, as public pressure mounted, the vote was delayed to this coming Tuesday.

The judge leading the corruption investigation, Sérgio Moro, warned this week that this amnesty bill could seriously impede his investigation – which is, of course, its central purpose. He warned more generally that retroactive amnesty measures that benefit the politicians who enact them are exactly the sort of thing that has destroyed faith in Brazil’s political institutions.

So here we have the very same people who impeached the democratically elected president in the name of punishing corruption and upholding the rule of law, using their ill-gotten power to shield themselves from accountability for their own political crimes. From the start, this was the fraud at the heart of Dilma’s impeachment, and it is hard to put into words how clear and obvious it has now become. Even the star columnist for O Globo – the newspaper that most agitated for impeachment – is now admitting that the central anti-impeachment argument is being proven correct, tweeting yesterday: “Approval of caixa dois amnesty reinforces PT’s argument that Dilma was removed so that the Lava Jato corruption investigation could be stymied.”

That this was the true goal of impeachment all along was beyond obvious. In May, one of Temer’s closest allies, Romero Jucá, was forced to resign as Temer’s minister after tapes were disclosed in which Jucá admitted as clearly as possible that Dilma’s impeachment was necessary in order to kill the corruption investigation, and that only once Dilma was gone would the media, the courts, the military and the public enter into a “national pact” to leave Brasília’s corrupt politicians alone.

But while Jucá was forced by the fallout to resign as minister in May, he was just named this month as leader of the Temer government in the Senate – because, obviously, Jucá’s corrupt scheme is shared by Temer and those who now rule Brazil. So Brazil’s big media outlets are only now being forced to admit what was completely clear all along: that by demanding impeachment, they were empowering Brazil’s most corrupt politicians and ensuring that the corruption investigation would be impeded.

But now an entirely new scandal directly threatens Temer himself. Last week, Temer’s Minister of Culture, Marcelo Calero, flamboyantly resigned, announcing he was doing so because one of Temer’s closest allies, the Minster of Government Geddel Vieira Lima, had been aggressively pressuring Calero to take action to benefit a construction project in which Geddel had a personal interest. Specifically, Geddel pressured Calero to secure approval for construction of a luxury high-rise in a historic beachfront preservation area, a building in which Geddel had purchased an apartment.

At first, Temer defended Geddel, adamantly insisting that he would not be fired. Temer’s appointee on a Congressional Ethics Committee blocked a vote to investigate whether Geddel violated ethical rules. Temer sought to downplay the controversy in every way possible in order to protect his close ally.

But that has now become impossible. Yesterday, Calero, the minister-turned-whistleblower, gave a sworn statement to the Federal Police in which he said that not only was he pressured by Geddel to secure approval for this construction project, but that Temer himself spoke with him on two occasions and similarly pressured him. As a result, the front page of every major newspaper this morning has screaming headlines that Temer himself is now implicated in this scandal, and opposition parties have already instituted impeachment proceedings against Temer himself for this. 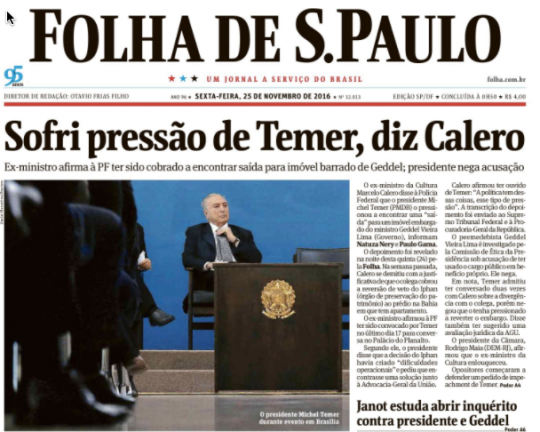 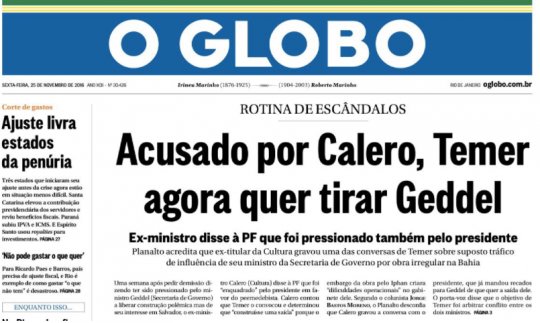 (Geddel resigned just this morning as this article was being published: the sixth minister Temer has lost to scandal.)

All of this comes as the leading figures in Temer’s party, the centrist PMDB, are not just engulfed by political scandal but are going to prison. The House Speaker who presided over and was the driving force behind Dilma’s impeachment, Eduardo Cunha, is now in prison as he awaits trial on charges of money laundering and bribery after being discovered with millions hidden away in Swiss bank accounts, while the former Governor of Rio de Janeiro state, Sérgio Cabral, last week was arrested on charges of overseeing a massive corruption scheme. This has always been one of the towering ironies of Dilma’s impeachment: that the party most empowered by it, Temer’s PMDB (formerly in alliance with PT), not only single-handedly destroyed Rio de Janeiro through ineptitude and corruption, but is filled with the continent’s most blatantly criminal political leaders. 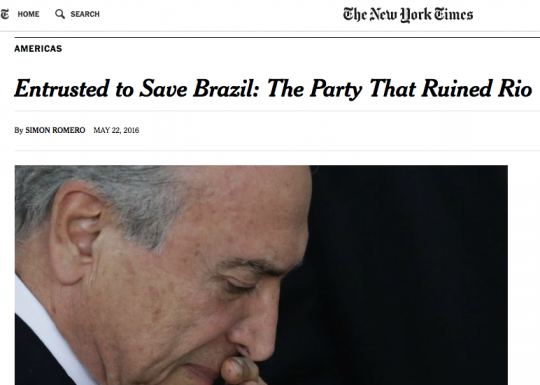 Recall that Temer himself, when speaking in New York in September to foreign investors and foreign policy elites, admitted that Dilma’s impeachment was due in large part to her refusal to accept his party’s austerity program, a stunning admission which Brazil’s big media completely ignored. Whether he is impeached in favor of new elections or is permitted to stumble through the remainder of his term as a widely despised figure matters little to them. They got what they wanted.

Nonetheless, the true purpose of impeachment now stands so nakedly revealed that even the prime media authors of impeachment are being forced to acknowledge what, until very recently, they viciously mocked: that the real purpose was to protect and empower the corrupt. But as vindicated as they now are, impeachment opponents can feel no sense of celebration, as these latest events simply yet again mean that the Brazilian people will continue to suffer greatly from a political and elite class that has failed them through the most glaring deceit and oozing corruption imaginable. The greatest fraud of all was that Dilma’s impeachment was sold to the population as a means of ridding the country of mismanagement and corruption when, from the start, it was designed to do exactly the opposite.