In the Trump Era, Leaking and Whistleblowing Are More Urgent, and More Noble, Than Ever 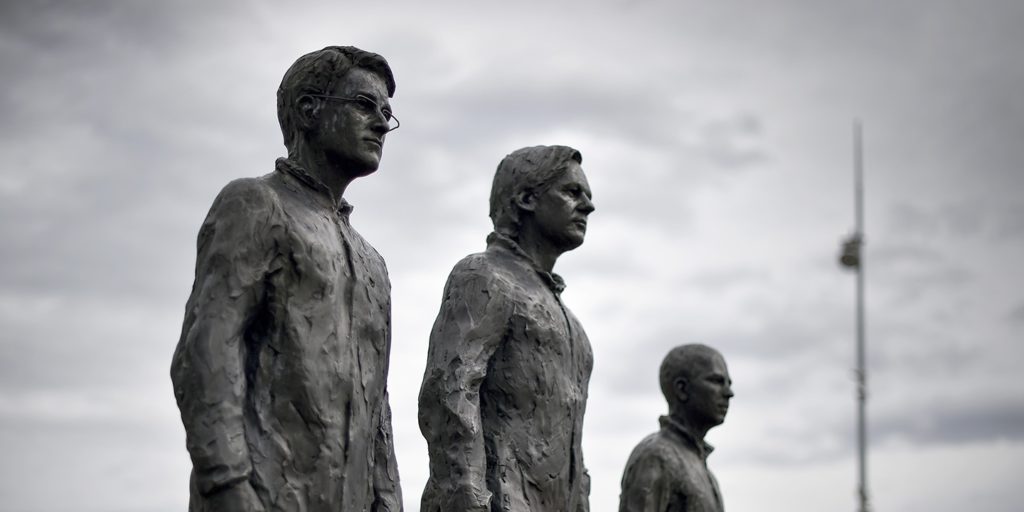 “Anything to Say?” is a bronze sculpture and art installation by Italian sculptor Davide Dormino, representing, from left, whistleblowers Edward Snowden, Julian Assange, and Chelsea Manning next to the U.N. offices in Geneva on Sept. 15, 2015.

14 Nov 2016 – For the past 15 years, the U.S. government under both parties has invented whole new methods for hiding what it does behind an increasingly impenetrable wall of secrecy. From radical new legal doctrines designed to shield its behavior from judicial review to prosecuting sources at record rates, more and more government action has been deliberately hidden from the public.

One of the very few remaining avenues for learning what the U.S. government is doing — beyond the propaganda that it wants Americans to ingest and thus deliberately disseminates through media outlets — is leaking and whistleblowing. Among the leading U.S. heroes in the war on terror have been the men and women inside various agencies of the U.S. government who discovered serious wrongdoing being carried out in secret, and then risked their own personal welfare to ensure that the public learned of what never should have been hidden in the first place.

Many of the important, consequential revelations from the last two administrations were possible only because of courageous sources who came forward in this way. It’s how we learned about the abuses of Abu Ghraib, the existence of torture-fueled CIA “black sites,” the Bush warrantless eavesdropping program, the wanton slaughter carried out in Iraq and Afghanistan, the recklessness and deceit at the heart of the U.S. drone program, the NSA’s secret construction of the largest system of suspicionless, mass surveillance ever created, and so many other scandals, frauds, and war crimes that otherwise would have remained hidden. All of that reporting was possible only because people of conscience decided to disregard the U.S. government’s corrupt decree that this information should remain secret, on the ground that concealing it was designed to protect not national security but rather the reputations and interests of political officials.

For that reason, when The Intercept was created, enabling safe and productive whistleblowing was central to our mission. We hired some of the world’s most skilled technologists, experts in information security and encryption, to provide maximum security for our journalists and our sources. We adopted the most advanced programs for enabling sources to communicate and provide information to us anonymously and without detection, such as SecureDrop. And we made an institutional commitment to expend whatever resources are necessary to defend the right of a free press to report without threats of recrimination, and to do everything possible to protect and defend our sources who enable that vital journalism.

Over the past two years, we have published several articles by our security experts on how sources (and others) can communicate and provide information to us in the safest and most secure manner possible, to minimize the chances of being detected. We’ve published interviews with other experts, such as Edward Snowden, on the most powerful tools and methods available for securing one’s online communications. As our technologist Micah Lee explained, no method is perfect, so “caution is still advised to those who want to communicate with us without exposing their real-world identities,” but tools and practices do exist to maximize anonymity, and we are committed to using those and informing the public about how to use them in the safest and most effective manner possible. 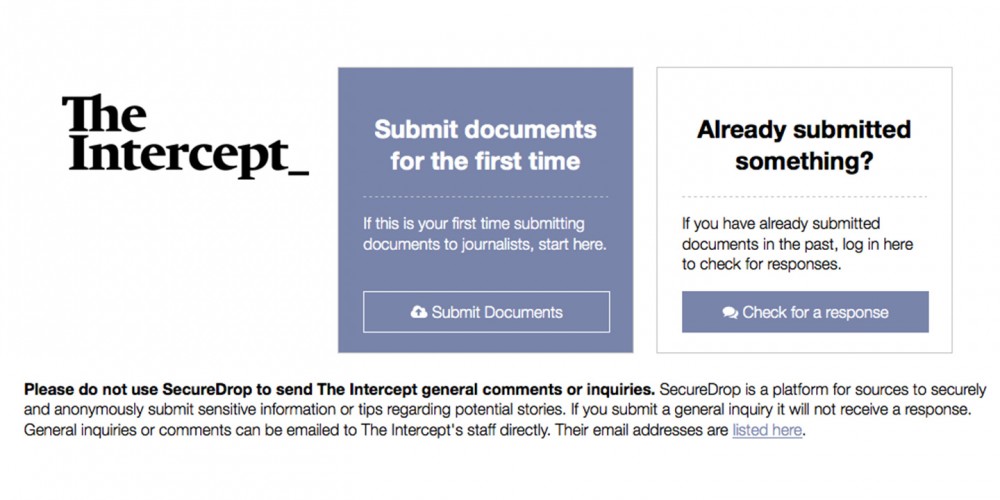 Donald Trump has not yet been inaugurated, but all the signs point to a presidency that will be deeply hostile to basic precepts of transparency. During the campaign, he repeatedly violated long-standing norms of disclosure, including even a refusal to make his income tax returns public, and already has broken with tradition by refusing during the transition to provide basic information about his whereabouts or activities.

Beyond that, the institutions of the executive branch are well-trained to resist transparency as much as possible and have been vested with countless tools to conceal their most important activities. Institutional inertia by itself, let alone once exacerbated by Trump’s own anti-transparency impulses, all but guarantees the Trump presidency will be aggressively antagonistic to basic public accountability.

For all those reasons, The Intercept is more determined than ever to do everything possible to enable sources, leakers, and whistleblowers to work with our journalists in the safest way possible, to ensure that information that belongs in the public domain is reported rather than hidden. There will undoubtedly be all sorts of actions and information in the Trump administration that will be concealed but that should be known, and the public will need courageous whistleblowers and leakers inside the government to ensure that it sees the light of day.