Jerusalem and Its Walls: UNESCO Refuses to Bow to Israeli Pressure 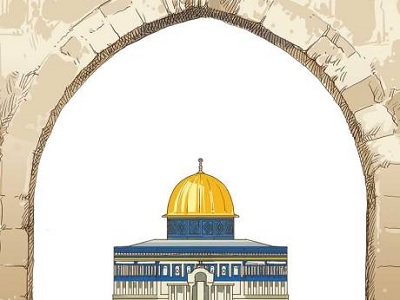 1 Nov 2016 – Despite all the threats and political grandstanding, UNESCO’s World Heritage Committee has approved, on October 26, a new resolution that reaffirms the status of occupied Jerusalem’s Old City on the list of endangered world heritage sites.

The approval of the resolution, entitled ‘Old City of Jerusalem and Its Walls’ comes only days after the UN Educational, Scientific and Cultural Organisation’s executive board ratified a resolution in which it condemned Israel’s violations of the status of Palestinian holy sites.

The text of both resolutions referred to the sites by their Arabic Muslim names only, which ignited a storm of criticism from Israel and a few Western countries as well.

Oddly, leading the charge was Italian Prime Minister, Matteo Renzi. The nature of the latter’s angry remarks left one wondering if he even read the text of the first resolution, which was approved on October 12.

“I think this is a mistaken, inconceivable resolution,” he said. “It is not possible to continue with these resolutions at the UN and UNESCO that aim to attack Israel. It is shocking and I have ordered that we stop taking this position [his country’s abstention] even if it means diverging from the position taken by the rest of Europe.”

Renzi, who became Prime Minister in 2014 at the relatively young age of 39 knows exactly how the game is played. In order to win favour with Washington, he must first satisfy Tel Aviv.

His country has abstained from the early October vote on the resolution that condemns Israel’s violations of the cultural and legal status of Occupied East Jerusalem. Then, the UNESCO decision has ignited the ire of Israeli Ambassador to Rome Ofer Zaks, who riled the Jewish community in Italy to protest Italy’s abstention.

Renzi engaged in damage control mode, clearly without truly understanding the nature of the resolution, which merely condemned Israel’s obvious violations of international law, and only called for Israel to respect the status of Palestinian culture in the occupied city.

The subsequent resolution too hardly deviated from acceptable international legal norms. As described by Palestinian official, Saeb Erekat, the new resolution called for “respecting the status quo of its religious sites, including [Al Haram Al Sharif] that continues to be threatened by the systematic incitement and provocative actions of the Israeli government and extremist Jewish groups.”

None of the procedures that led to the votes on the first or second resolution were accused of violating protocol, nor was the wording inconsistent with international law. In fact, UNESCO was just doing its job: attempting to protect and preserve the historical and cultural heritage of the world.

Renzi’s outburst is, however, particularly disappointing, to say the least, for the young, eager politician who so desperately tried to score cheap political points with Israel and the US without a full, or even partial comprehension of what the UNESCO resolutions resolved.

“To say that the Jews have no links to [occupied] Jerusalem is like saying the sun creates darkness,” he said, paraphrasing the sentiment displayed by the Israeli Prime Minister himself. Interestingly, the resolutions made no such reference.

Other Israeli officials followed suit with a chorus of denunciations. Minister of Culture, Miri Regev, cut to the chase by labelling the resolution “shameful and anti-Semitic.”

In fact, it was neither. In addition to Renzi’s scathing reaction, the US and other Western governments reacted with exaggerated anger, again without remotely considering or addressing the situation on the ground, which prompted the resolutions — and numerous other UN resolutions in the past — in the first place.

Israel is working diligently to appropriate Muslim and Christian heritage in occupied East Jerusalem, a city that is designated by international law as illegally occupied.

The Israeli army and police have restricted the movement of Palestinian worshippers and is excavating under the foundation of the third holiest Muslim shrine, Al Haram Al Sharif, in search of a mythological temple. In the process of doing so, numerous Palestinians, trying to defend their mosque from the attacks staged by Israeli occupation forces and extremist Jewish groups, have been killed.

How is UNESCO to react to this? The first resolution only calls on Israel to “allow for the restoration of the historic status quo that prevailed until September 2000, under which the Jordanian Awqaf (Religious Foundation) Department exercised exclusive authority on Al Aqsa Mosque/Al Haram Al Sharif.” It also ‘stressed’ the “urgent need for the implementation of the UNESCO reactive monitoring mission to the Old City of Jerusalem and its Walls.”

For nearly 50 years, following the illegal occupation and annexation of the Palestinian Arab city, Israel has done everything it possibly could to strip the city of its universal appeal and Arab heritage, and make it the exclusive domain of Jews — thus the slogan of occupied Jerusalem being Israel’s ‘eternal and undivided capital.’

Israel’s anger stems from the fact that after five decades of ceaseless efforts, neither UNESCO nor other UN institutions will accept Israel’s practices and designations — it’s appropriation of territories and sites. In 2011, following the admission of ‘Palestine’ as a member state, Israel ranted and raved as well, resulting in the US cutting off funding to UNESCO.

The latest resolutions indicate that Israel and the US have utterly failed to coerce or control UNESCO. What also caused much fury in Tel Aviv is that UNESCO used the Arabic references to Al Haram Al Sharif, Al Aqsa Mosque and other Muslim religious and heritage sites — in much the same way as they would refer to Egypt’s Pyramids of Giza and China’s Great Wall by their actual names. This is simply factual — hardly ‘anti-Semitic’.

Since its establishment atop Palestinian towns and village, Israel has been relentlessly aiming to rename everything Arabic using Hebrew alternatives. Recent years have seen a massive push towards the Judaisation of Arab Christian and Muslim sites, streets and holy shrines, a campaign spearheaded by the Israeli right and ultranationalist groups.

Not only should the UNESCO resolutions be respected, they should also be followed by practical mechanisms to implement its recommendations. Israel, an occupying regime, should not be given a free pass to besiege the holy shrines of two major world religions, restrict the movement and attack worshippers, annex occupied territories and destroy what is essential spiritual heritage that belongs to the entire world.