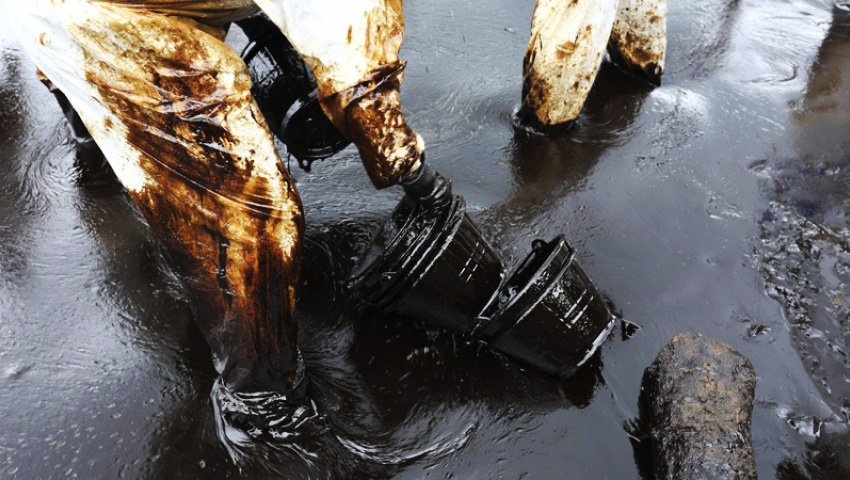 30 Oct 2016 – Are you still wondering why So many people support the #NoDAPL protectors? This spill is part of the reason. Imagine, if you will, tens of thousands of gallons of oil pouring into the river that provides the drinking water for over 10 million people. Would you want to drink it? or swim in it? or eat anything from it?

A North Dakota oil well owned by Oasis Petroleum Inc blew out over the [30 Oct] weekend and has yet to be capped, leaking more than 67,000 gallons of crude so far and endangering a tributary of the Missouri River, according to Ernest Scheyder of Reuters.

The cause of the blowout remains unknown, though state officials surmise it may have been caused by hydraulic fracturing of a nearby well in a situation referred to in the industry as “communication” between wells.

Thick gray smoke rose from the Helling Trust 11-15H well site on Monday afternoon as dozens of tractor-trailers hauled in vacuum trucks and other cleanup equipment. Oasis is trying to cap the well by pumping in a thick mixture of mud and clay, state officials said.

The blowout happened at 11 p.m. local time on Saturday. The company worked all weekend to regain control of the well, including flying in staff from its Houston headquarters, but so far efforts have been unsuccessful, according to state and local officials.

The well is about 15 miles south of White Earth, North Dakota, in Mountrail County.

Scheyder says, “Unlike most blowouts, this one did not produce a geyser of crude but a smaller burst roughly 5 feet (1.52 m) in height that sprayed oil onto the well pad. Some of the oil pooled onto the pad and some was carried by a light wind to the White Earth River, a tributary of the Missouri River, roughly 850 feet (260 m) down a nearby cliff.”

“This is not your typical blowout,” said Bill Suess of the state’s Department of Health.

A light sheen of oil was on the nearby river, and a Reuters reporter counted at least 16 absorbent booms that had been installed in an attempt to keep the oil from moving downstream.

Oasis said it was working “to ensure that safe and thorough remediation efforts are completed in a timely fashion.”

The company has hired a Superior Energy Services to assist in capping the well.

When you are deciding whether or not you should support the #NoDAPL protectors or corporate profits, take this oil spill into consideration. Make the wise choice for the future of America, the future of your children.