The Fight for Brazil’s Future

The Brazilian youth is leading the resistance to legislation that would reverse social gains and protect wealthy elites. 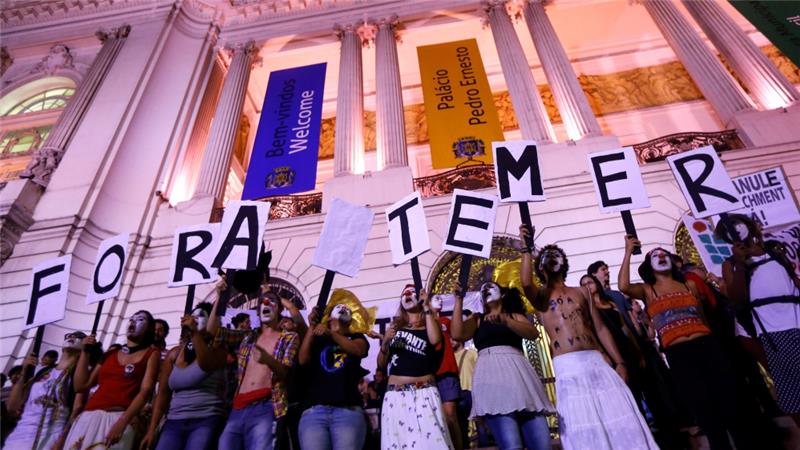 16 Nov 2016 – The recent municipal elections in Brazil confirmed the trend: The left has been comprehensively defeated, with the Workers’ Party (PT) reaping their worst results in 20 years.

As that sea change takes place, the government formed after the impeachment of PT’s Dilma Rousseff is steamrollering through parliament a constitutional amendment that would put a 20-year cap on public spending that nobody has bothered discussing with society.

As PT’s implosion appears set to put the left in disarray for a long time to come, one may wonder why the hurry. Yet, the reasons are not difficult to fathom and have little to do with the justifications the government invokes, namely the ongoing economic crisis.

The fact that roughly two-thirds of the population supported Rousseff’s impeachment does not make Michel Temer either popular or legitimate.

On the contrary, he has poll numbers nearly as bad as Rousseff’s and is widely perceived as a prime representative of a self-serving, kleptocratic elite.

Almost 95 percent of those who voted in an online consultation opened by the Senate in September supported immediate direct elections – before, that is, the consultation mysteriously vanished from the Senate’s homepage.

It is clear to many, and certainly to Temer himself, that he was not brought in to unite the country and solve its problems, but was chosen by some people to solve their problems.

That means, firstly, a political class looking for someone to “stop the bleeding” caused by corruption investigations, to quote a former Rouseff minister-turned-key Temer ally caught on tape scheming the impeachment.

And secondly, finance and business elites whose support for the new president is conditional on a set of measures to kick-start the economy – in their favour.

If he fails to deliver on those fronts, or if the cost of sustaining him becomes too high, it will not be difficult for his peers to throw him overboard in 2017, when a new president would be indirectly elected by parliament. We can thus see why, in the face of his short-term prospects, Temer would be in a rush.

But the Brazilian right is also in a hurry because they still have no credible presidential candidates for 2018, despite the crisis and the left’s collapse. Stunningly, most poll scenarios have them tied with or losing to Lula and other centre-left candidates.

With a majority in parliament and its opposition in crisis, therefore, the right have two years in which to reshape the country’s future as much as they can, despite having no popular mandate to do so – or indeed, precisely because it is doubtful that they could actually earn one.

The most striking of proposed measures is PEC 55, a constitutional amendment that would freeze public spending at present levels for 20 years, readjusted according to inflation.

In direct opposition to the logic that guided Brazil’s post-dictatorship constitution, which established a compulsory minimum investment in health and education and tied it directly to raises in revenue as a way of correcting long-standing inequalities, this bill would entail that the next five governments would be constrained by a very low ceiling.

This would see investment in education and health go down for two decades, not to mention areas without constitutional minima such as science and technology, culture, housing, infrastructure and direct wealth transfer programmes such as Bolsa Familia.

If one could speak of a coup in Brazil, it was not against Rousseff, but against Brazilian society.

The new government’s idea of what is “good for the economy” is as revealing for what it leaves out as for what it includes. No mention is made of transforming Brazil’s tragically regressive tax system, in which the large base of the pyramid pays proportionately much more than the very narrow top.

At a time when the $50bn public deficit is used to call for sacrifices, nothing is said of fighting tax evasion, taxing large fortunes or introducing a tax on dividends – which estimates say could raise as much as $12.5bn while affecting only the richest. Neither is there talk about plugging Rousseff’s disastrous policy of corporate tax breaks, arguably the main reason for the present crisis.

Following a familiar script, the sense of urgency afforded by the economic crisis is being used to justify a set of policies that, while neutrally presented as “good for the economy”, benefit the few in detriment of the many.

And the perverse beauty of such “solutions” is that they function as machines of perpetual motion, producing the crises for which these same policies are then presented as the sole remedies. That is, once the 20-year cap on investment has depleted public health, education and infrastructure, this will be used as an argument for further privatisation.

It is true that this was a road that Rousseff had been travelling down since her post-election U-turn. But the sheer voracity with which the impeachment is being seized as an opportunity to reverse not only some of the gains of the PT years, but even some of the more progressive aspects of the 1988 constitution, make it difficult to speak of simple continuity.

If one could speak of a coup in Brazil, it was not against Rousseff, but against Brazilian society, against trends towards greater equality and accountability that had, weakly but surely, emerged over the last decades. The swiftness of the attempt to turn back the clock makes the forces behind Temer look like a besuited version of the Khmer Rouge.

On the longer timescale, it is as if we are watching a struggle to the death between two forces: On the one hand, a new generation who grew up with better expectations and broader horizons than their parents, and for whom prospects until recently looked up; on the other, those who would stand to lose privileges as the others won rights. Future versus past, in short.

If the contest at present looks so lopsided in favour of the latter, it is because the political agents that would have been the advocates of the former have shown themselves not up to their historical task.

The pivotal point was the 2013 protests, which at once signalled to the political class that the PT years had generated demands pointing beyond PT’s conciliationism, and that the streets no longer recognised the party as their natural interlocutor and mediator.

A haunting video of a high-school student addressing legislators gone viral has become one of the most discussed documents of the period. Actions coordinated on the internet have made #PECdoFimdoMundo (“End of the World” Bill) into a global trending topic, and almost 94 percent have voted against the project on the Senate’s online consultation.

Yet it is clear that legitimacy is far from being among the new administration’s main concerns. The weeks between now and December 15, when the legislative calendar closes, will have huge consequences for the future: It will be a major test of strength to determine whether the population can still impose limits on its government.

Rodrigo Nunes is a lecturer in modern and contemporary philosophy at the Catholic University of Rio de Janeiro (PUC-Rio).