‘We Cannot Believe [Nobel Peace Laureate] Aung San Suu Kyi’: Why Many in Burma Are Losing Hope of Peace 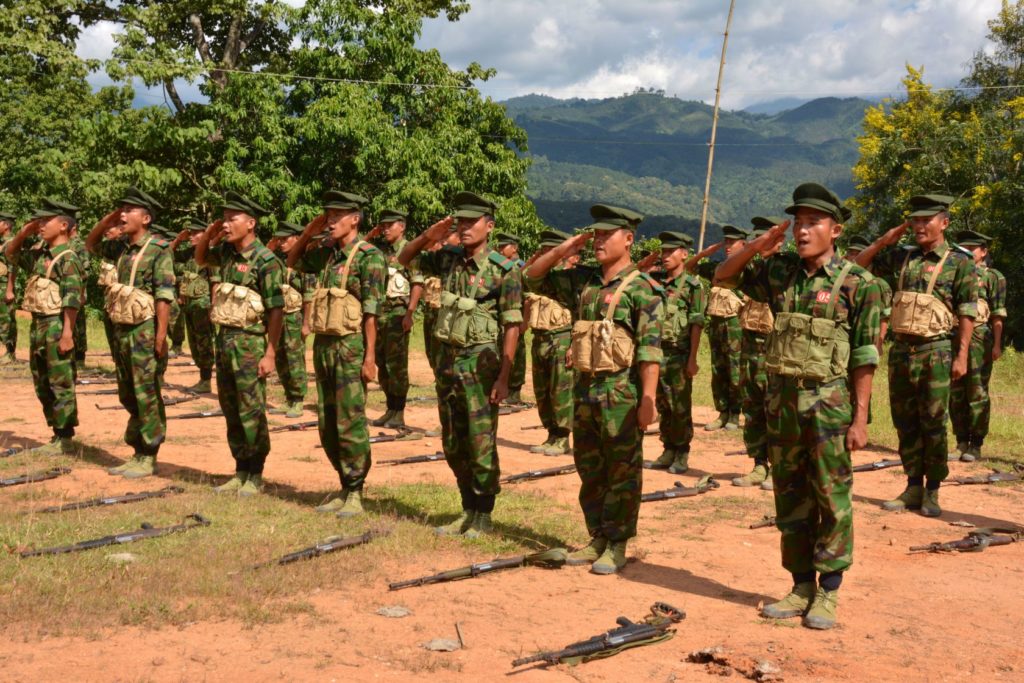 23 Nov 2016 – As the sun slowly sets behind the jungle-covered mountains of northern Burma’s Kachin state, a dozen or so rebel fighters are preparing for a night in the trenches at their hilltop post.

Conditions are tough, and the men say they struggle to sleep in their damp dugouts. The enemy is never far — Burmese army troops can be seen stationed on another hilltop, some 500 meters away.

Several such posts, manned by around 200 Kachin soldiers, are the only southern line of defense separating government forces from Laiza, a nearby town on the Burma-China border and a Kachin Independence Army (KIA) stronghold. Though this particular area, called Lawa Yang, has not seen serious clashes for two years, the soldiers are wary as violence is rising across the region.

“We are worried there could also be fighting here,” says Lt. Col Zhau Hpan, a burly Kachin veteran who commands Lawa Yang. “We think the Burma army wants to increase the fighting. In the north, we see they are building new roads to position their artillery.”

The KIA is one of more than 20 non-state armed groups in Burma, which is formally known as Myanmar, and it’s one of the biggest rebel armies in the country. The 10,000-strong militia, made up of soldiers from the Kachin ethnic group, has been fighting for autonomy from the Burmese government since the 1960s, making it one of the world’s longest civil wars. In 2011, a 17-year cease-fire broke down, and since then fighting has displaced about 100,000 people and killed hundreds.

The KIA says the Burmese army launched a major offensive in mid-August, some 30 km north of Laiza, to capture a strategic mountain, named Gidon by the Kachin. If successful, it would cut the KIA territory into two. The assault has since intensified and KIA forces — dug into the mountaintop and armed with basic assault rifles, machine guns and mortars — have repelled waves of ground attacks, while taking daily mortar shelling and frequent strikes by artillery, fighter jets and helicopter gunships.

“The situation is escalating, the Burma army is deploying more and more troops,” KIA spokesperson Lt. Col Naw Bu told TIME during an interview in Laiza. He said 15 rebels were killed or injured at Gidon, while the KIA estimates the Burmese army had sustained 100 casualties by late October.

Naw Bu said some 3,000 government soldiers had moved into positions along the roughly 100-km stretch of border area controlled by the rebels, and clashes have become frequent.

On Sunday, in response to months of growing pressure from the military, the KIA and three smaller allied armies — the Rakhine, Ta’ang and Kokang rebels — struck back unexpectedly. Several hundred fighters jointly attacked army and police stations at three areas in northern Shan state, including near Muse, Burma’s main border gate with China.

State media said eight people were killed, including three civilians; 29 were injured. The violence caused the border to be closed and prompted China to put its army on high alert in the area. About 3,000 civilians fled and are reportedly seeking shelter in China.

The offensive and the rebels’ retaliation mark the heaviest fighting in northern Burma since 2014, and the violence has escalated despite ongoing efforts by de facto government leader Aung San Suu Kyi to reach a nationwide cease-fire between the military and 20 ethnic rebel groups.

Government spokesperson Zaw Htay condemned Sunday’s attacks by the rebels, saying they were “a very big setback for our peace process … we are very concerned.” He added, “Our key border trade route to China, our biggest trading partner, has been cut.”

The recent conflict adds to the woes of the young National League for Democracy (NLD) government, which also faces a deepening crisis in western Arakan state. There, the army is carrying out lethal operations among stateless Rohingya Muslims while searching for suspected militants who launched deadly attacks on police outposts last month.

In early April, the NLD formed Burma’s first democratic government following half a century of military rule, after it clinched a historic election win last year. It prioritized a resumption of the peace process and hopes of a nationwide cease-fire by February 2017. That truce would then allow for political dialogue to address ethnic groups’ demands for federal autonomy, as well as reforms to the army-drafted constitution.

Yet shortly after the new government’s first peace conference in late August, the military ramped up attacks in Kachin, intensified operations in neighboring Shan state and began a hunt for a rebel splinter group in southern Karen state, an area that had seen little fighting for years. Thousands of civilians were displaced anew and numerous reports emerged of torture, extrajudicial killings and indiscriminate shelling of villages, for which the army — known locally as the Tatmadaw — has long been notorious.

The rising bloodshed highlights a fundamental challenge for the NLD: how to build trust and guide peace talks between ethnic groups and the military, while the army, in accordance with the constitution, continues to run all security operations under the ministries of defense, home affairs and border affairs, as it sees fit.

“Expectations were high just two months ago … but the Tatmadaw now appears to be pursuing its own policies once again, without explanation or apparent regard for the political and humanitarian cost,” Tom Kramer, an expert on Burma’s conflict with the Transnational Institute, a Netherlands-based policy organization, tells TIME.

“Disillusion is spreading in [ethnic] communities that voted for the party in large numbers,” he said. “It is not too late, but the NLD needs to take urgent steps to assert its authority on the nationwide peace process.”

So far, the government has tried to establish a working relationship with the army and avoided criticizing its expanding operations, while encouraging regular peace talks between all sides.

The recent upsurge in fighting has dimmed hopes among Kachin soldiers and civilians living in Laiza, that the NLD government can take control of the peace process and prevent the military from launching new attacks.

“Peace will remain distant. The NLD cannot do anything because the Tatmadaw controls everything under the constitution,” said Lt. Col Zhau Hpan, the frontline commander at Lawa Yang Post in the mountains around Laiza. 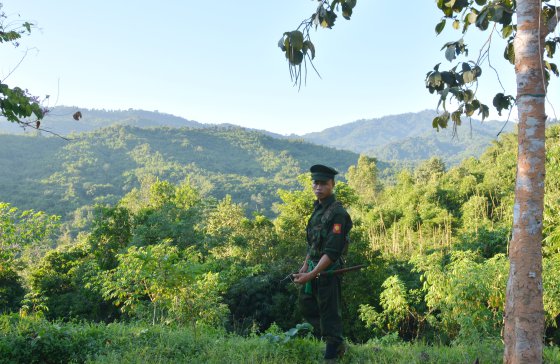 A Kachin Independence Army (KIA) soldier seen at Lawa Yang frontline post. The Burma Army is stationed on the hills in the background.
Paul Vrieze

Some 5,000 residents, thousands of KIA soldiers, and around 20,000 displaced civilians live in this narrow valley hemmed in by mountains on one side, and a small river on the other that demarcates the border with China. Many in Laiza are weary; the conflict is entering its sixth year. Kachin leaders said during interviews in late October that they continued to support the peace process despite the army offensive, but trust in the process was being eroded.

“The KIA’s position is that a political discussion is the only solution to end the conflict,” KIA spokesperson Naw Bu said. “Like the NLD, we want to establish a democratic and federal union. If that happens, it would reduce the powers of the army — that’s why the army wants to keep fighting.”

The military, which only shares its views through official statements, has continued to express support for the peace process and a political dialogue. It has not yet responded publicly to Sunday’s rebel attacks.

Read More: Inside the Kachin War Against Burma

The continued fighting has required the KIA to expand its forces and it is recruiting hundreds of young Kachin from rebel and government areas to its “National Service.” The draft is voluntary and many are motivated by a sense of duty, though the KIA’s unofficial “one recruit per family” rule has led to allegations of forced, and sometimes underage, recruitment in rural areas.

At a training school located on a hill outside Laiza, about 100 cadets — some of them barely out of their teens, including a few girls — were being drilled by a sergeant in the midday heat. The four-month program was preparing them for combat, or in the case of female recruits, deployment behind the front line.

While returning to their barracks, two cadets, aged 26 and 28, said they had both left their jobs in Mandalay, central Burma, to join the KIA. “We are ready to fight. We want to defend against the Myanmar army,” said one of them, who asked not to be named.

A few kilometers outside of town, 20,000 displaced Kachin villagers have been languishing for five years in crowded, dilapidated U.N.-built camps. Jobs are scarce and most here depend on aid. Another 30,000 displaced people live in camps in other areas under control of the Kachin rebels. Some 50,000 reside in camps in government-controlled areas in Kachin and Shan states.

The recent increase in fighting has lowered spirits among the displaced, who are simultaneously being affected by cuts in international aid and an army blockade that has prevented aid convoys from crossing the frontline since May, ostensibly for security reasons.

The U.N., which recently was forced to cut about 20% of its aid to most displaced Kachin due to a donor funding shortfall, has called for the easing of the restrictions. Local aid groups accused the army of politicizing humanitarian aid.

“Aid blockades have been used by the military as a political tool since the conflict began, but in recent months it’s worse,” said La Rip, director of Kachin Development Group, an NGO based in Laiza. “The army now has the intention to create a chaotic situation in the KIA-controlled camps.”

La Rip said that for many people in KIA areas the democratic transition to an NLD government had yielded nothing so far. “They say Myanmar is a different country now, but the people here see no difference — they are actually suffering more than before there was an elected government,” he said.

La Phai Hkawn Shang, a mother of two who has lived in Je Yang displacement camp since 2011, said she could accept the aid reductions, but was disheartened by the rise in fighting after the NLD took over.

“I can’t complain about food, I’ll receive what I’m given,” she said. “But we cannot believe Aung San Suu Kyi. We thought she would stop the army, yet now the fighting is increasing.”