America’s Hare Krishna Movement, at 50, Is a Testament to Adaptability 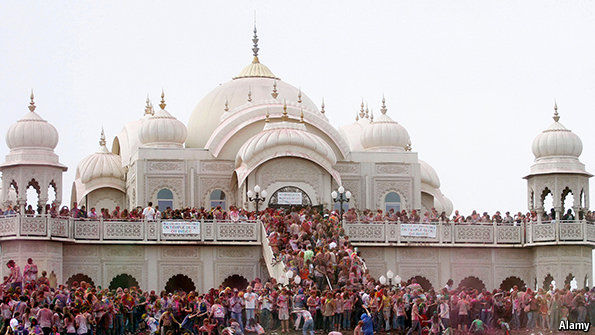 9 Dec 2016 – On A recent Saturday evening, dozens of residents trickled into a converted school in Salt Lake City, Utah for their weekly devotions. Many wore traditional Hindu garb but some were dressed more casually in jeans and leggings. Leaving their shoes at the door, they entered a long auditorium decorated with divine images and took their places in fold-up chairs. Soon a group of musicians on a small stage began serenading the worshippers with a familiar, hypnotic chant:

The temple priest, Caru Das Adikari, then delivered a homespun sermon, glancing at his laptop to refresh his memory: the message was simply that people should stop worrying about the future because it did no good. This is one of two places of worship in central Utah that he has founded; the other, at Spanish Fork 50 miles away, is more spectacular (see picture) and attracts thousands of visitors a year. A new temple is under construction in Salt Lake City and should be ready by next October.

Against many expectations, a religious movement whose success was linked to a particular moment in America’s cultural and political history, and which later underwent a traumatising child-abuse scandal, has survived, evolved and found a respectable place in the country’s religious and political spectrum.

The Hare Krishna movement was founded in New York City 50 years ago by an Indian teacher, A.C. Bhaktivedanta Swami Prabhupada, and soon began resonating with young people who were disillusioned with establishment mores and in search of new forms of spirituality and self-expression. It was both rooted in ancient tradition of Hinduism and well-adapted to the psychological needs of an American generation that was horrified by the Vietnam war, disillusioned by materialism and looking for fresh ways of thinking and living. As is argued by Graham Schweig, a professor at Christopher Newport Univerity, its message was in some ways “lighter” than traditional Judaism or Christianity: it urged people to commune with a single god, Krishna, who offered a “playful and blissful” experience with little emphasis on judgement or punishment.

However for those really committed to the faith, there was a strict side: it expected devotees to observe a regime of abstinence from meat, gambling, intoxication and sex outside marriage. In the movement’s early days, it also encouraged followers to live in ashrams or communes and expend virtually all their energy on spreading the faith; robed and shaven-headed devotees used to populate America’s airports and proselytise passengers.

For some, that single-minded devotion took a sinister turn. Parents were encouraged to send their children to boarding schools, in part so as to keep themselves free for missionary work. Evidence emerged of serious maltreatment and sexual abuse at these schools, and the movement agreed to pay $9.5m in compensation to several hundred victims. The boarding schools were all closed. As the scandal started emerging in 1998, the International Society for Krishna Consciousness (the movement’s formal name) published a fairly frank account of the horrors which had unfolded; some saw this as a commendable show of honesty, and a basis for a fresh start.

These days, the profile of the movement has transformed. Only a handful of its American followers, who may number between 50,000 and 100,000, live in communes; the rest live regular lives with conventional jobs and many wear conventional clothes. The Utah temples enjoy cordial relations with the region’s religious majority, the Mormons. Many of the original white followers, or their children, have drifted away but numbers have been replenished by recent immigrants from the India, in search of a form of worship that somewhat resembles the religious practices they left behind. Mainstream Hindus are often rather sceptical of the Krishna movement, but for some Indian-Americans, Krishna temples are a welcome taste of home. According to the Pew Research Center, the Hindu population of America rose by 1m between 2007 and 2014, a jump of 86%, so even a small fraction of that burgeoning and highly educated community is enough to keep many temples going.

As is noted by Burke Rochford, a professor at Middlebury College who has devoted 40 years to a sympathetic study of the Krishna phenomenon: “From radical beginnings that placed preaching and conversion above the needs of families, the Hare Krishna has evolved into an American religious community centered on family life.”

It is a commonplace of religious history that every big spiritual movement seems to travel along a path, sometimes backward and forward, between ecstatic religious experience and settling down as an permanent, conventionally organised institution. The followers of Krishna appear to be no exception.