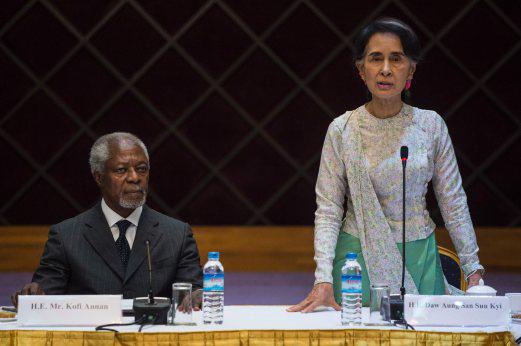 Aung San Suu Kyi delivers her address while former UN secretary general Kofi Annan looks on during their meeting at the National Reconciliation and Peace Centre in Yangon on September 5, 2016. Photo: AFP

13 Dec 2016 – Persecution of Rohingyas in Myanmar is continuing with impunity and without a break. Dieng and Yanghee Lee, UN special rapporteur on human rights in Myanmar, have confirmed these atrocities and “requested independent UN investigations on the alleged ‘ethnic cleansing’ and other mass atrocities in the Rohingya region of Rakhine State”. But Aung San Suu Kyi has remained defiant to an extent that when asked by her admiring Myanmar crowd of these allegations during her recent visit to Singapore at a town hall meeting she responded callously that these are “external fabrications” and then “laughed out loud” – Hillary Clinton did the same when she reported to her colleagues, Gadhafi’s murder.

As pressure on Aung San Suu Kyi mounted, Myanmar government established a “national inquiry commission” with vice president Myint Swe, a former lieutenant general who once headed the dreaded military intelligence and coordinated the border army division, one of the main persecutors of the Rohingyas, as chair. What was even more intriguing was that Aung San Suu Kyi invited Kofi Annan, former UN Secretary General, under whose watch as the UN Secretary General the Rwanda and Balkan massacres happened, who is also known to be her admirer, to “guide” the Commission to recommend measures to “ease tensions between the Muslim Rohingya and Rakhine Buddhists in the Buddhist-majority nation.” Intriguingly, Commission’s task has been to “ease tensions” and not to find permanent solutions for a community that are dispossessed and disenfranchised by law and face persecution from military and ‘Buddhist’ thugs on a daily basis, without any entitlement to justice.

Indeed, given the nature of Commission’s terms of reference that are quite limiting and that its recommendations are also non-binding and furthermore, that its composition that included on the one hand friends of Aung San Suu Kyi (Kofi Annan, for example) and on the other, the Rohingya tormentor himself (the chair of the Commission) it looked a non-starter from the start.

While the full report of the Commission is awaited (not sure whether this would be published at all, untampered that is) reading of Kofi Annan’s recent responses in the press, of his findings that he is only “deeply concerned” – a diplomatic cliché meaning irritation; saw few ‘burned houses’ and that “We went to the region but we didn’t walk into a live conflict” and also that it was not possible to “witness rape” and that Rohingya persecution is not ‘a genocide’, leaves no doubt as to which side he is on.

Priscilla Clapp, a former top U.S. diplomat who served as chief of mission and permanent chargé d’affaires – the most senior U.S. position – at the U.S. embassy in Myanmar from 1999 to 2002 who also regards Aung San Suu Kyi as a “buddy” believes that the issue of Rohingya is “overblown” and referring to reports of abuse she asserts, “The human rights people only think about human rights” [a profound discovery indeed] and that… “they don’t look at the whole picture, and it is not in their interest to think about the context within which this is happening.” What context? Regardless, Clapp has done her ‘buddy’ job to water down the issue. A friend in need, indeed.

Neither Annan’s denial of ‘genocide’ nor Clapp’s claim of ‘overblown’ assertion of what is a human carnage going to exonerate Aung San Suu Kyi of gross apathy she has demonstrated so far to the on-going pogrom of a minority community of her own country.

Even though Annan and Clapp have tried portraying the Rohingya issue as a conflict of two faiths, it is not though in the West’s current political mood branding of the conflict as a Muslim/Buddhist issue is a perfect ploy to dehumanise the oppressed (who in this case are Muslims) and exonerate the oppressor. The Rohingya issue is a minority dispossession and disenfranchisement process that is being pursued through well thought-out plan. The whole world knows it and therefore, Aung San Suu Kyi and her military colleagues would do well not to play games and get their ‘buddies’ to wash their dirty linens on their behalf, it will not *make the Rohingya issue go away.

The world especially Myanmar’s powerful ASEAN partners are watching. Malaysian Prime Minister Najib has already termed the issue as an act of ‘genocide’ and demanded immediate end to the killing. His Army Chief has hinted that if need be, Malaysia would commit its Army in peace keeping mission in Rakhine state, implying that Malaysia is looking at the issue as something that may need prolonged international intervention. Indonesians are also fuming. Myanmar’s neighbour, Bangladesh, especially its government, is a bit more circumspect but there is mounting pressure from within to act.

Therefore, the sooner Aung San Suu Kyi forgets the ‘buddy’ solution as a way to sideline the Rohingya issue, the better it is; for it is no more an internal affair of Myanmar, its neighbours sense that if it is not solved quickly , fairly and indeed permanently, it would threaten regional security.

The writer is a former UN senior policy manager.

Copyright: Any unauthorized use or reproduction of The Daily Star content for commercial purposes is strictly prohibited and constitutes copyright infringement liable to legal action.