The UN Settlement Resolution Is Too Little and Too Late

Palestinians know that they have been offered only stale crumbs from the UN Security Council’s table. 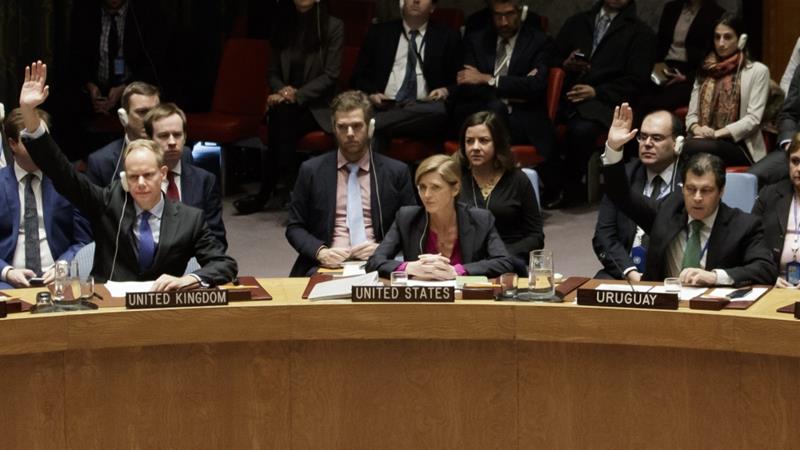 25 Dec 2016 – The United Nations Security Council vote decrying Israel’s policy of settlement expansion is a welcome, but empty, gesture – all but irrelevant to the contest waged daily between Israel and Palestinians, but perfectly suited to the new fascination with entertainment as policy.

Every lead player in this manufactured drama on New York’s East River has written a script that puts its role in the best light.

The international community has done nothing of substance in almost 50 years to constrain Israel’s appetite for new territory in Palestinian areas conquered in June 1967.

Now once again, and with great difficulty, it has trumpeted its opposition, content to warn of the consequences of the status quo, but not to proscribe its central features, let alone to mandate a diplomatic road map for effectively addressing the issue.

Huffing and puffing of this sort is yet another sad reminder that, if, after so many decades, yet another toothless statement of concern is cause for such self-congratulation, Israeli settlers have nothing to fear.

Indeed, the only one to suffer material and immediate consequences of this vote is hapless Senegal, whose role in bringing the resolution to the table has won it an immediate Israeli decision to end its aid programme.

The ineffectiveness of the resolution

Israel has not been able to achieve the extraordinary feat of defying the international consensus against its settlement policies for decades by being complacent in the face of such international opposition, no matter how inconstant.

It has long pursued a policy based on the adage that “creating facts on the ground” – moving its citizens to conquered territory and in doing so, denying Palestinians the opportunity to create sovereignty based upon unchallenged control of territory – creates the context for diplomacy, and that everything else, including the pontifications from New York, or even Washington, while certainly a cause for concern, is hostage to this strategy.

Indeed, the UNSC vote, which fails to suggest any remedy, is scripted perfectly to match the central claim of Israel’s long-serving prime minister, Benjamin Netanyahu, who himself learned a thing or two about international diplomacy as Israel’s representative to the UN a generation ago.

The vote, and its self-evident, if notable, inclusion of East Jerusalem as occupied territory, will play well in Israel and among its many allies as yet the latest in an ignominious history of international opposition to the Jewish state, and will offer Netanyahu another politically potent arrow is his “the world is against us” quiver.

UNSC Resolution 2334 joins an undistinguished list of long-forgotten efforts to end occupation and settlement, and more broadly to create a Palestinian state and fix Israel’s place as an accepted and acknowledged part of the region.

For the small but vocal pro-Palestinian Israeli community that punches well above its weight, if only in foreign capitals, the UNSC resolution is the best news they have heard in many years.

Like wanderers in the desert, they see the vote as an oasis – offering a tantalising hint of effective international action to force an Israeli retreat to secure and defensible borders.

Like all mirages, however, this one too is a dream that is bound to disappoint. The international community remains unwilling to save Israel from itself by imposing a diplomatic framework to negotiate an end to occupation and the creation of a Palestinian state, and, with or without the council’s actions, Israeli opponents of occupation are too weak and uncertain to succeed on their own.

Palestinians know better than anyone the calamitous effectiveness of this strategy. They are at the centre of an Arab political community that, in our generation, is distinguished by its weakness in the face of external and internal challenges and the consequent undermining of state sovereignty across the region that follows as a result.

The Palestine Liberation Organization (PLO) and its tired representatives have not scored a substantive diplomatic achievement since Yitzhak Rabin acknowledged them a quarter century ago.

An Israeli decision to withdraw its settlements and army from Palestinian territory – the ostensible objective of the international community – was won not by the UN, Washington, or the PLO, but by Hamas, which convinced Israel the old fashioned way – through blood and fire – that sitting in Gaza as conquerors was simply not worth the trouble.

Palestinians know that they have been offered only stale crumbs from the Security Council’s table, none better than the villagers who have seen their lands and livelihoods compromised by settlement expansion.

But what else can their leaders do, but wave this new resolution as proof of yet another historic achievement on the road to an inevitable, if faraway victory?

Another record of US failure

The United States as always reserves for itself a key influence in matters international, but this time it has chosen a non-speaking role.

The Obama administration has recorded a singular failure. It is the only US administration since the June 1967 war that has left barren the diplomatic effort to negotiate an end to the occupation.

During eight years of energetic effort, it failed to move Israel to negotiate directly with the PLO, let alone to withdraw from territories occupied almost half century ago.

Washington had not had an idea in more than three years, since the expected failure of its central proposition that US good offices were enough to convince Israel to act in its enlightened self-interest, get with its facile “right side of history” programme, and lighten up on the Palestinians.

Now as he heads for the exit, Barack Obama has yet again been dragged from behind, letting the caravan pass in a feel-good abstention that puts Washington on the periphery of the right side of history.

That moment is destined to pass. US support for the vote would not, in and of itself, been a game changer. Remember the Clinton parameters, an inexact, but far more prescriptive, policy that fell from the tree almost as soon as it was ripe.

Perhaps the most important players were those not celebrating the victory on First Avenue. Donald Trump has promised to ignore Obama’s last, toothless gasp, and offered the UN as yet another object of Washington’s scorn by adopting a new look in US policy that treats Israel’s expanding presence in the West Bank and Jerusalem as legitimate.

Trump’s main allies in this effort are not surprisingly Netanyahu, for whom a Trump White House is almost a dream come true, and less obviously Abdel Fattah al-Sisi’s Egypt, who offered to sacrifice the resolution it had drafted and sponsored in the hope of re-establishing a more solid base of cooperation with the incoming administration and preserving its expansive security ties in the Sinai and Gaza with Israel.

UNSC Resolution 2334 joins an undistinguished list of long-forgotten efforts to end occupation and settlement, and more broadly to create a Palestinian state and fix Israel’s place as an accepted and acknowledged part of the region.

The international community continues to bark, but Israel’s settlement machine sees no cause to pause the work of generations in the service of Greater Israel.

Geoffrey Aronson writes about Middle Eastern affairs. He consults with a variety of public and private institutions dealing with regional political, security, and development issues.