Erik Prince, the former CEO of the firm responsible for opening fire on Iraqi civilians, has the militarised solution to Europe’s migrant problem. 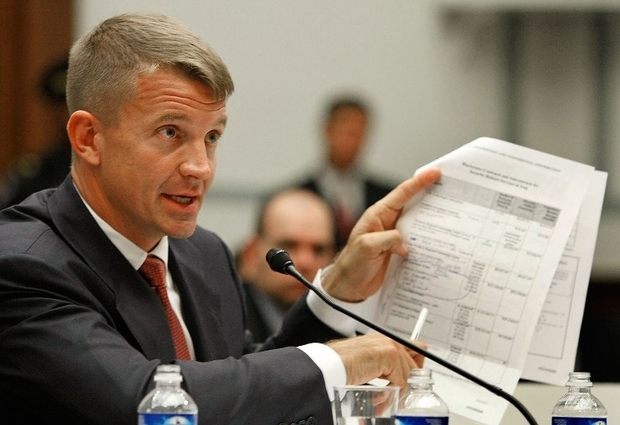 5 Jan 2017 – Starting the new year off with a bang, the Financial Times has just published a dispatch by Erik Prince, notorious founder and former CEO of the private security contracting firm Blackwater, the outfit responsible for projects such as the 2007 Nisour Square massacre of Iraqi children and other civilians.

In peddling his alleged antidotes to the crisis, Prince is symptomatic of a far more profound one.

The company has undergone a series of rebranding efforts over the years as an apparent means of distancing itself from overtly toxic connotations.

According to its website, FSG offers “security and logistics services in frontier markets”. 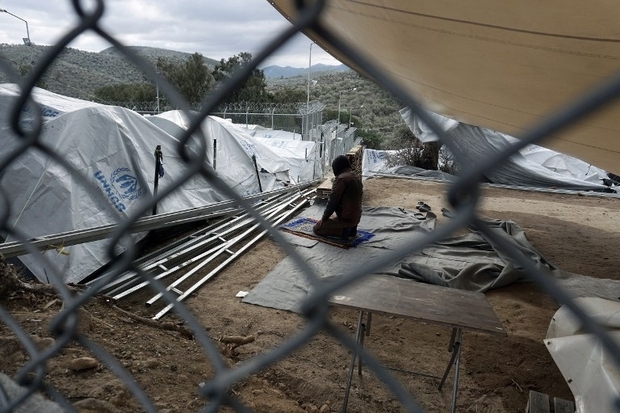 A man prays in the Moria camp on the Greek Island of Lesbos in December, 2016 (AFP)

In an investigation by The Intercept, Prince’s activities at FSG were reported to include endeavouring to sell weaponised crop dusters in Africa as part of “what one colleague called his ‘obsession’ with building his own private air force”. As with many of Prince’s operations, a facade of legality has often proved elusive.

Suffice it to say that the Financial Times isn’t racking up huge points on the ethical front by promoting a man whose modus operandi has essentially been to make a killing off of killing.

READ: ‘They started to die together’: Can Egypt protect migrants in 2017?

In his memoir, Civilian Warriors: The Inside Story of Blackwater and the Unsung Heroes of the War on Terror, Prince writes that, by 2009, his company had received more than $1bn for its services in Iraq from the US State Department alone.

This is not counting copious other contracts in Afghanistan and elsewhere, including contributions to the CIA’s drone strike programme.

In his Financial Times debut, Prince sounds the alarm that Europe has been overwhelmed with refugees and that the “very existence of the EU is in danger”. Luckily for humanity, however, Prince has “a solution that will restore stability to Libya and mitigate the crisis” – a solution he says is “based on many years’ experience in military and civilian business”.

Call me a party pooper, but I wouldn’t file the regular imprisonment, torture and rape of migrants in Libya under the category ‘travelling unchecked’.

Never mind that Prince himself is implicated in a fair amount of destruction and havoc-wreaking in Iraq, Afghanistan, and other locales that now serve as primary sources of – you guessed it – Europe-bound migration.

Prince’s proposed refugee “solution” involves a “public-private partnership” – a euphemism of sorts for what appears to boil down to a privatised war on refugees. He envisions “base camps” for security personnel “alongside a new border fence” in Libya, with border police “consist[ing] of mentors with a European law enforcement background, supported by locals trained in key basic skills”.

Prince writes: “All personnel would be armed and have agreed-upon rules of engagement and migrant detention and repatriation policy. Each base would have airborne surveillance and search and rescue as well as armed vehicle quick reaction forces. Air operations would be provided by third-party professional providers, as would medical evacuation services.” 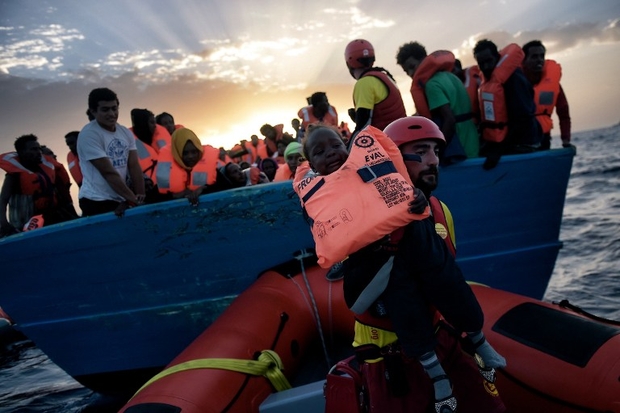 NGO Proactiva Open Arms rescues people from a distressed vessel in the Mediterranean Sea, 20 miles off the coast of Libya in October 2016 (AFP)

The “mentors”, Prince specifies, “would be the skeleton structure of the unit providing key leadership, intelligence co-ordination, communications, medical and logistics expertise”.

As for what global entity might be called upon to supervise the whole shebang, maybe something with the words “frontier services” in its title?

So much for paid advertising.

In Prince’s reality, the present dearth of Libyan border security means that any old migrant can “travel unchecked” to the coast and hop on a boat for the “short, if dangerous” ride to Europe.

Call me a party pooper, but I wouldn’t file the regular imprisonment, torture and rape of migrants in Libya under the category “travelling unchecked”.

Meanwhile, Prince’s fervent commitment to stanching the flow of certain humans naturally does not translate into an across-the-board opposition to human movement.

Perhaps mercenaries also hold the key to other persistent global issues like climate change and snoring and erectile dysfunction.

Private security mercenaries, for one, should evidently be permitted to transcend borders at will – as should persons with the last name of Prince who relocate to Abu Dhabi to set up secret armies.

In his memoir, Prince reminisces fondly about Ronald Reagan’s free market obsession and anti-communist “aggressive military policy”, quoting Reagan’s 1985 State of the Union address in which the president once again obliterated any pretences to a separation of church and state in the US: “Freedom is not the sole prerogative of a chosen few; it is the universal right of all God’s children.”

But just as the anti-communist version of “freedom” meant freedom for capital rather than people, Prince’s conception is similarly exclusive. 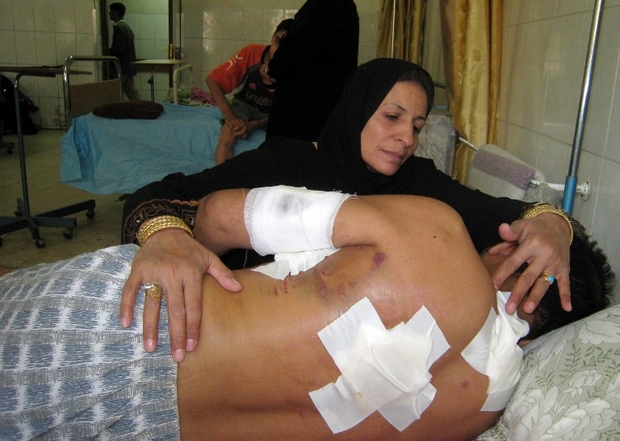 Iraqi lawyer Hassan Jabbar, who was wounded in a shooting incident involving Blackwater in Baghdad’s Nisour Square, lies injured as his wife comforts him in the hospital on 22 September 2007 (AFP)

While Prince and his bank account are apparently eligible for unfettered intercontinental exploitation of conflict and misery, poor folks fleeing war and economic persecution must be stopped at all costs.

Nor is “freedom” a detectable option for Iraqis slaughtered by US security contractors or Pakistanis killed by US drones.

In the end, Prince’s refugee “solution” is hardly surprising coming from someone who has also proposed combating Ebola with private contractors.

And who knows: perhaps mercenaries also hold the key to other persistent global issues like climate change and snoring and erectile dysfunction.

One thing is for certain, though: that Prince’s “solutions” aren’t aimed at any sort of resolution but rather at the perpetuation of strife in the interest of financial gain.

In peddling his alleged antidotes to crisis, Prince is symptomatic of a far more profound one.