Gut Health 101: What Is the Microbiome?

The human body is a complex, interconnected ecosystem and the gut is at the center of it all. The gut is where the body converts food to energy. The gut is a major, frontline component of the immune system. The gut is connected to the central nervous system, brain, and can influence mood. You can’t talk about the gut or its importance without talking about the organisms that live there.

The collection of microbes that live in and on the human body is known as the microbiota.[1] The microbiome refers to the complete set of genes within these microbes. Microbial genes significantly influence how the body operates and even outnumber human genes by a ratio of 100:1.[2] Each of us has a unique microbiota and a unique microbiome. The microbes that live in your body are determined by what you’re exposed to and these colonies are constantly in flux. Geography, health status, stress, diet, age, gender, and everything you touch all affect the composition of your microbiota.[3] 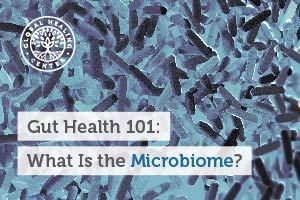 Scientists have known about microorganisms for hundreds of years. In 1673, Antony van Leeuwenhoek wrote to the Royal Society of London about his discovery of tiny “animalcules” with the use of his “microscopes.” Leeuwenhoek found microbes almost everywhere he looked,[4] but the discovery was largely ignored until the 1870s when their role in the cause and spread of disease was observed. Previously, doctors believed that bad air caused disease. Robert Koch proved that tiny microorganisms were responsible. His discovery solidified the validity of germ theory—the idea that certain microbes cause specific diseases.[5]

Germ theory created a scientific rationale for cleanliness that became the precursor to it becoming a moral and social imperative. People began bathing daily. Soap, once considered a luxury, became a basic household necessity. Doctors and surgeons started washing their hands and sanitizing their instruments.[6] New laws led to public health initiatives that limited the spread of disease and saved lives.[6]

Until recently, scientists focused almost solely on how pathogenic microbes negatively affect humans. There has since been a realization that some microorganisms are actually beneficial to human health.[7] More attention is now given to the microbiome and its role in health and immunity.[8] Launched in 2008, The Human Microbiome Project (HMP) was created to better understand the relationship between health, disease, and the microbiome.[9]

The Makeup of the Microbiome

The microbiota is comprised of a dizzying number of microorganisms. Bacteria make up the bulk—about 30-50 trillion cells.[10] The human body itself contains about 37 trillion human cells.[11] It may be disconcerting to think of yourself as mostly microbial cells, but, by weight, you’re definitely mostly human as microbial cells are significantly smaller than human cells. Bacterial cells range from 0.2-10 microns (micrometers) across; human cells range from 10-100 microns.[12] For reference, the average dust mite, which is microscopic, is 200-300 microns wide.

If you’ve seen the oft-quoted 10:1 ratio (10 microbes to 1 human cell), you might be surprised to learn that it was actually just an estimate that circulated throughout academic and scientific resources as fact. It is now regarded as academic urban legend.[13] 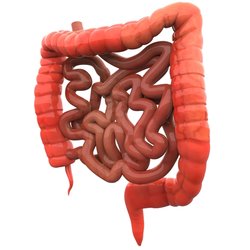 It’s believed that humans carry about three pounds of bacteria in their intestines.[14] Everyone’s individual microbiome is as unique as their fingerprint and comprised of hundreds of different types of bacteria.[15] The specific number of bacteria cells varies throughout the day and is always turning over.[16]

Although bacteria account for most of the mass of the microbiota, viruses are actually the most abundant inhabitants.[8, 17] We tend to think of viruses as harmful, but that’s not always the case. The viruses found in the gut are primarily bacteriophages, meaning that they infect gut bacteria cells but they don’t necessarily harm them. Rather, they have a symbiotic relationship. Viruses can quickly transfer genes—beneficial genes. So, if new bacteria are introduced to your gut, either through diet or probiotics, the viral cells can help the bacteria thrive by transferring the genetic code.[18]

The Role of the Human Microbiota

The role of the microbiome is so central to the body’s operations that it essentially acts as an organ.[18] The microbiome impacts aging, digestion, the immune system, mood, and cognitive function.

Some of the bacteria in the gut produce enzymes that support digestion, especially the digestion of polysaccharides—healthy and complex sugars found in plant foods.[19] These bacteria also provide B vitamins, vitamin K, and short chain fatty acids. The microbiota also influences metabolic rate.[20]

A strong microbiome is the foundation of your immune system. When you were born, your gut was a clean slate, ready to learn.[21] Exposure to microbes provides the education that trains the immune system how to respond to different organisms. In this way, the immune system mediates the relationship between the body and the microbes it hosts.[21] Harmful organisms are dealt with, helpful organisms exist in harmony and contribute to good health overall.[22]

Research has also revealed the important role the microbiome has on mental health. There is a complex relationship between the gut and brain, called the gut-brain axis (GBA). The microbiota interacts with the central nervous system to regulate brain chemistry and mediate stress response, anxiety, and memory.[23]

How Is the Human Microbiota Formed? 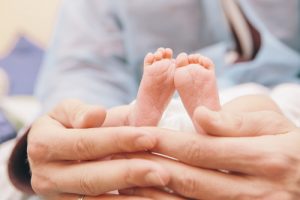 It’s generally agreed that the human body is first exposed to microbes during birth.[18, 24] The makeup of the mother’s vaginal microbiota changes during pregnancy and is extremely influential.[25] Babies born vaginally are colonized primarily by the Lactobacillus genus of bacteria. Newborns delivered by Caesarean section are exposed to skin microbes such as Staphylococcus, Corynebacterium, and Propionibacterium.[26] Whether the baby was born at home or the hospital can also affect the composition of the baby’s microbiota.[3]

As babies grow, their microbiome will change. In the first few months of life, the body is colonized by relatively few species of microbes—only about 100. By the age of 3, a child’s microbiota possesses closer to 1000 species of microbes and begins to resemble the microbiota of an adult. Puberty and, much later, menopause are two other life events that can significantly change the composition of the microbiota.[3]

The Bacteria in Your Gut Microbiome

Microbiome composition may vary throughout the intestines; most are concentrated in the large intestine. The bacteria in the average adult gut include Bifidobacterium, Lactobacillus, Bacteroides, Clostridium, Escherichia, Streptococcus, and Ruminococcus. Not only will diet influence the microbial composition of the microbiota, the microbiota influences the nutritional value of food.[27] Though specific bacteria vary, they share many of the same genes.[28]

Humans do not have the ability to produce the enzymes required to break down complicated nutrients. However, gut bacteria do have that ability and it’s absolutely essential for proper digestion. Bacteria enable us to eat a diverse diet and receive a broad range of micronutrients and phytonutrients.[29]

†Results may vary. Information and statements made are for education purposes and are not intended to replace the advice of your doctor. Global Healing Center does not dispense medical advice, prescribe, or diagnose illness. The views and nutritional advice expressed by Global Healing Center are not intended to be a substitute for conventional medical service. If you have a severe medical condition or health concern, see your physician.

Dr. Edward F. Group III, DC, NP, DACBN, DCBCN, DABFM has studied natural healing methods for over 20 years and now teaches individuals and practitioners all around the world. He no longer sees patients but solely concentrates on spreading the word of health and wellness to the global community. Under his leadership, Global Healing Center, Inc. has earned recognition as one of the largest alternative, natural and organic health resources on the Internet.