In Umm al-Hiran, Palestine, It Is a ‘Continuing Nakba’

Israel has advanced plans to raze the village of 150 homes and replace it with a town for Israeli Jews. 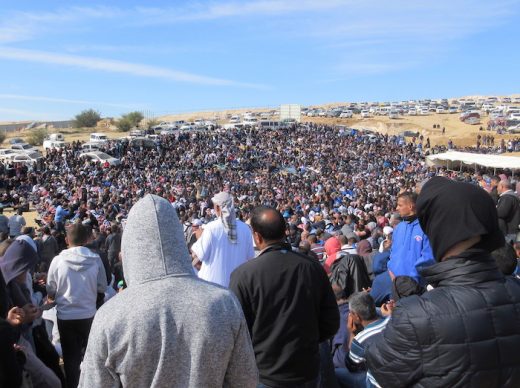 22 Jan 2017 – They came in their thousands, from across Israel and from occupied East Jerusalem, to bury Yacoub Abu al-Qiyan after Friday [20 Jan] midday prayers. The small dusty valley at the heart of Umm al-Hiran village in the Negev desert turned dark with rows of worshippers. But Abu al-Qiyan’s body never materialised.

By early afternoon, it was confirmed that the Israeli police had refused to release the corpse, two days after Abu al-Qiyan was shot dead during a pre-dawn raid to bulldoze his home and those of another dozen families.

A sword has hung over the heads of Umm al-Hiran’s 1,000 inhabitants for many months, as the Israeli government has advanced plans to raze the Palestinian Bedouin village of 150 homes and replace it with a town for Israeli Jews.

Raed Abu al-Qiyan, Yacoub’s 40-year-old nephew, told Al Jazeera: “Not only did the police kill him in cold blood, but now they are holding his body hostage to try to make more convincing their ridiculous story that he is a terrorist.”

A police claim that they shot dead Abu al-Qiyan after he committed a “car-ramming attack” – driving into a group of Border Police, killing one of them – has “rubbed salt deeper into the wound”, Najeh Abu al-Qiyan, a friend of Yacoub’s, told Al Jazeera.

Witnesses, including Israeli Jewish activists who were in the village to protest the demolitions, say Abu al-Qiyan lost control of his car on the dusty hillside below his home after Israeli police shot at him in the early morning darkness.

An aerial video taken by police appears to confirm the witnesses’ accounts, showing Abu al-Qiyan driving slowly and cautiously until there were bursts of gunfire from the police. The car can then be seen accelerating and veering wildly down the steep slope.

Lawyers for the family will get a hearing before Israel’s Supreme Court on Monday to demand his body’s return.

Leaders of Israel’s 1.7 million Palestinian citizens say the minority has long and bitter experience of police brutality. But they have been enraged by what they call “lies and cover-ups” from the police and rapidly escalating rhetoric from the government.

Yacoub Abu al-Qiyan’s 24-year-old son, Hussam, who recently returned from his last year of medical studies in Ukraine, said that description of his father bore “no relationship to reality”.

“He worked hard to send me abroad and made sure I had the best opportunities in life,” he told Al Jazeera. “He wanted all his children to be educated like him and to be positive role models in our community.”

On Saturday night, thousands turned out at Arara in central Israel to protest Abu al-Qiyan’s killing and a wave of further demolitions they fear the government is preparing for Palestinian communities in Israel.

Addressing the crowd, Ayman Odeh, head of the Joint List faction in the Israeli parliament, called for an independent inquiry “to uncover the lies of Netanyahu, Erdan and the police”.

In response to the video footage showing police shooting before Abu al-Qiyan lost control of his car, spokesman Micky Rosenfeld told Al Jazeera that officers had initially “fired warning shots into the air”, not at the vehicle.

But a report on Friday night on Israel’s Channel 10 TV challenged that version. Abu al-Qiyan’s autopsy, it said, showed he was hit in the torso and knee in the first rounds of shooting. He then bled to death over half an hour while police refused to let an ambulance attend to him.

Raed Abu al-Qiyan rejected claims that his 50-year-old uncle had ever intended to confront the police.

“He knew there was no way we could stop 500 armed police from bulldozing his home,” he said. “So he put everything valuable into the car and was leaving the area. He did not want to stay and see the destruction. It would have broken his heart.”

A maths teacher, Abu al-Qiyan reportedly had his computer, clothes and his pupils’ books in the back of the car when he died.

In the wake of the leaked autopsy report, liberal Jewish legislators have started to raise questions too about the police conduct.

Ksenia Svetlova, of Zionist Union, said that, if it was shown that Abu al-Qiyan was denied life-saving treatment, “then it’s Azaria case number two” – a reference to an army medic, Elor Azaria, who was filmed last year executing a wounded Palestinian in the West Bank city of Hebron.

Odeh, who was present in Umm al-Hiran on the morning of Abu al-Qiyan’s death, was himself injured. Photographs show him lying on the ground dazed, his head bleeding, with Israeli police standing impassively over him. Odeh accused police of shooting him twice with sponge-tipped bullets.

He added that police had used extreme levels of violence, firing sponge-tipped bullets, tear gas canisters and stun grenades directly at the villagers and their supporters. 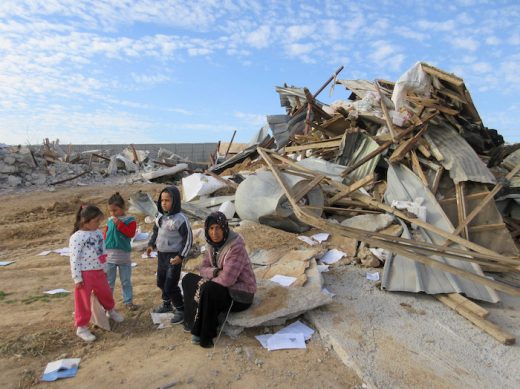 Abu al-Qiyan’s widow, Raba, by the ruins of their home / copyright: Jonathan Cook

Basel Ghattas, a Joint List legislator who attended the Friday prayers, recalled the conclusions of a judicial-led inquiry into the police killing of 13 unarmed Palestinian citizens during protests in Israel at the start of the second Intifada in 2000.

He told Al Jazeera: “The inquiry warned the police not to come to civil demonstrations with live ammunition, and that they must not treat Palestinian citizens as an enemy. And yet they brought live rounds to Umm al-Hiran. That indicates that they came with an intent to kill.”

A week before the houses in Umm al-Hiran were destroyed, 11 homes in the Palestinian town of Qalansawe in central Israel were razed. With tens of thousands of Palestinian homes in Israel under threat of demolition, fears are high that Netanyahu’s far-right government intends to open a new front against the minority.

There are widespread suspicions that Netanyahu hopes to distract attention from his own troubles, as he becomes more deeply enmeshed in a corruption scandal.

Dov Khenin, the Joint List’s only Jewish legislator, told a protest in Tel Aviv on Wednesday night: “The deeper the police investigation of Netanyahu, the wider the flames of his incitement.”

The fate of Umm al-Hiran, and Abu Al Qiyan’s killing, said Suhad Bishara, a lawyer with Adalah, a legal centre for Israel’s Palestinian minority, were painful reminders to Palestinians in Israel of “the continuing Nakba” – the catastrophe that befell the Palestinians with the loss of their homeland in 1948 to create a Jewish state.

Although Israel’s Palestinian citizens avoided expulsion outside Israel’s new borders, as many as a quarter were driven from their homes by the Israeli army, becoming internal refugees. They included the families now in Umm al-Hiran.

Adalah, which has been representing the families’ efforts to stop their expulsion, said military officials forced the al-Qiyan tribe to relocate to Umm al-Hiran in the 1950s.

Successive governments, Bishara told Al Jazeera, had refused to recognise Umm al-Hiran, as well as dozens of other Bedouin communities in the Negev. Decades later, and without a master plan to authorise building, Israeli officials have classified all Umm al-Hiran’s homes as illegal.

“For these families, it is like seeing the Nakba being replayed,” Bishara said. “They were made homeless so Jews could live in their place in the 1950s, and now the same thing is happening all over again.”

She added: “For decades, the government has said to villages like Umm al-Hiran, ‘we cannot provide infrastructure in the remote corners of the desert where you live’. And yet, time and again, we see that Israel can build a community in exactly the same place, if it is intended for Jewish citizens”.

Palestinian leaders believe the government is making an example of Umm al-Hiran, as a prelude to expelling tens of thousands of other Bedouin who have been trying to hold on to a traditional rural way of life in their villages.

The government has been formulating a proposal to forcibly relocate many of them to a handful of overcrowded government “townships” that are the most deprived communities in Israel. A previous version, known as the Prawer Plan, was abandoned in late 2013 following waves of protest.

Majd Salah, from Qalandiya, close to East Jerusalem, said he had come to the Friday prayers to show solidarity with Umm al-Hiran, pointing out that many homes in his community were threatened with demolition too.

He added that the government was fearful of returning Abu al-Qiyan’s body in case the burial became a rallying point for protests. “As with our own martyrs in Jerusalem, the police will try to force his family to bury him in secret, in the middle of the night,” he told Al Jazeera.

Ghattas, the Joint List legislator, said the “escalating incitement” against Abu al-Qiyan – including the accusation he belonged to ISIL – was part of a trend intended to justify further repressive policies against the Palestinian minority.

Few Palestinian citizens have forgotten that, only weeks ago, the police and government accused the minority of being behind an “arson intifada”, when hundreds of fires broke out across Israel following a prolonged drought and fuelled by high winds.

All of the dozens of Palestinian citizens arrested over the fires were later released without indictments.

Raed Abu al-Qiyan said: “This kind of continual incitement just fuels the fires of hatred. And it will be used to encourage and justify more violence against us in the future.”