John McAfee on Russian Hacking Allegations: “If It Looks Like the Russians Did It, Then I Can Guarantee You It Was Not the Russians”

30 Dec 2016 – Following the release of an FBI report outlining Russia’s alleged role in hacking the 2016 election, Larry King sat down to talk with tech pioneer John McAfee to discuss the current state of cybersecurity. 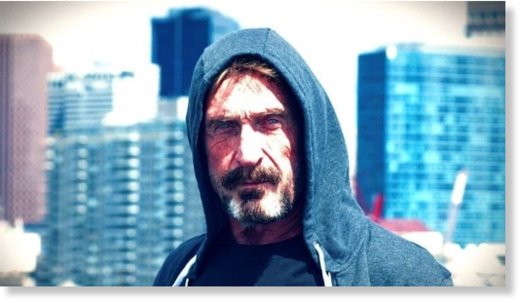 McAfee is no stranger to cybersecurity. As the developer of the first commercial antivirus program, he has been a major player in the industry for the past 50 years. He is also the CEO of MGT Capital Investments, and an outspoken former presidential candidate for the Libertarian Party.

Based on all of his experience, McAfee does not believe that Russians were behind the hacks on the Democratic National Committee (DNC), John Podesta’s emails, and the Hillary Clinton presidential campaign. As he told RT, “if it looks like the Russians did it, then I can guarantee you it was not the Russians.”

The Joint Analysis Report from the FBI contains an appendix that lists hundreds of IP addresses that were supposedly “used by Russian civilian and military intelligence services.” While some of those IP addresses are from Russia, the majority are from all over the world, which means that the hackers constantly faked their location.

McAfee argues that the report is a “fallacy,” explaining that hackers can fake their location, their language, and any markers that could lead back to them. Any hacker who had the skills to hack into the DNC would also be able to hide their tracks, he said.

“If I was the Chinese and I wanted to make it look like the Russians did it, I would use Russian language within the code, I would use Russian techniques of breaking into the organization,” McAfee said, adding that, in the end, “there simply is no way to assign a source for any attack.”

However, McAfee does see a problem with the National Security Agency (NSA) being able to listen in on every conversation and read every text message and email of every American. Rather than focusing on disrupting the bad guys in foreign countries, McAfee thinks that “all of that effort has been placed on a country that is afraid of its own citizens.”

He claims that the only way he has been able to fully block the NSA from infecting his phone with spyware is by using a flip-phone too old to be hacked. He even goes as far as to call the iPhone the “ultimate spy device.”

As for the future, McAfee’s biggest fear is that the role of the NSA will change under a President Donald Trump.

“Donald Trump wants the DOJ to head a national task force of law enforcement agencies to create our cybersecurity,” he says.

McAfee predicts that if President-elect Trump follows through with that intention, the FBI will end up heading the NSA, as they are the lead technologists within the DOJ.

McAfee thinks that idea is a recipe for disaster, warning “we don’t need one more attacker, that attacker being our own government.”