China and Trumpism: The Political Contradictions of Global Capitalism

As U.S. hegemony declines and Chinese hegemony possibly rises, it is clear that the political scaffolding of world capitalism is hopelessly outdated. 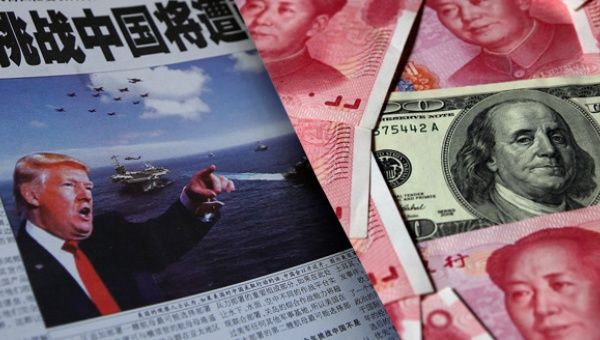 14 Feb 2017 – When China’s richest man, Wang Jianlin, warned last December that a U.S. trade war against China would result in disaster for the United States, it was no idle threat. Trump scores political points with his social base each time he rails at Beijing, yet the U.S. and the global economy would grind to a halt if it were not for China’s preponderant role in shoring up global capitalism at this moment of acute crisis.

RELATED: Trump Backtracks on ‘One China’ Stance with Xi

The simplistic notion that Trumpism represents a return to protectionism and national trade rivalries conceals the real inner contradictions of global capitalism that are bringing the 21st-century world order to the breaking point. The system faces a structural crisis of extreme inequality and overaccumulation, as well as a political crisis of legitimacy and an ecological crisis of sustainability.

But there is another dimension to the crisis that is escalating international tensions and, depending on the turn of events, could well spark world conflagration. The disjuncture between a globalizing economy and a nation-state system of political authority threatens to undermine the system’s ability to manage the crisis and helps explain Trump’s reckless anti-China posturing.

Global Capitalism No Longer Has a Hegemonic Center

There has historically been a succession of hegemonic powers, from Spain in the 16th century, to the Netherlands in the 17th, England in the 18th and 19th, and finally the United States in the 20.th. As each “hegemon” rose to dominance it organized the political institutions and economic rules of the world capitalist system. While academics now debate the decline of U.S. hegemony and the possible rise of the Chinese, what is certain is that the global economy is increasingly Sino-centered and the existing political scaffolding of world capitalism is hopelessly outdated.

OPINION: The Battle Against Trumpism and Specter of 21st Century Fascism

Simply put, China’s international political clout does not match its expanding economic role in the global economy. The current world political order dates to the creation in 1944 of the Bretton Woods institutions by the Western victors in World War II and includes the World Bank, the International Monetary Fund, and the United Nations System. The rich Western states also established their NATO military alliance and numerous political forums for their collective rule, among them, the Bilderberg Club and the Trilateral Commission. The United States, along with Western Europe, dominates decision-making in these institutions, while the status of the dollar as the international currency makes the U.S. Treasury the world’s central bank.

However, as globalization has brought into being a Transnational Capitalist Class (TCC) and a global production and financial system into which all nations have been integrated, the BRICS – Brazil, Russia, India, China, South Africa – and other countries in the Global South have emerged as major players in the global economy. The leading capitalist groups from these countries have joined the ranks of the emerging TCC and have acquired a stake in the stability and well-being of global capitalism. But all this has occurred within the framework of an increasingly arcane international political order.

Global capitalism is particularly dependent on China, given vast worldwide chains of subcontracting and outsourcing and the central role China plays in those chains. China provides a market for transnational corporations and until recently a sink for surplus accumulated capital, along with a vast supply of cheap labor controlled by a repressive state. China became in the past three decades the new “workshop of the world.” Moreover, China leads the way in what is a surge in outward foreign direct investment from countries in the Global South to other parts of the South and to the North. Between 1991 and 2003, China’s foreign direct investment increased tenfold and then increased 13.7 times from 2004 to 2013, from US$45 billion to US$613 billion.

The more enlightened among transnational elites have been clamoring for more effective transnational state apparatuses to resolve this disjuncture between a globalizing economy and a nation-state based system of political authority. They have been seeking transnational mechanisms of governance – such as the creation of the World Trade Organization in 1995 and the establishment of the G20 in 1999 – that would allow the global ruling class to stabilize the system in the interests of saving global capitalism from itself and from radical challenges from below.

The World Economic Forum or WEF, which holds its famed annual meeting in Davos, Switzerland, has called for new forms of global corporate rule, including a proposal to remake the United Nations system into a hybrid corporate-government entity run by TNC executives in “partnership” with governments. “The weakening of multiple systems has eroded confidence at the national, regional, and global levels,” warned the call to the 2017 Davos meeting, held this past January 17-20. “In the absence of innovative and credible steps towards their renewal, the likelihood increases of a downward spiral to the global economy.”

While Trump was spouting his right-wing populism and protectionist threats in the run-up to his January 20 inauguration, Chinese President Xi Jinping took center stage at the January WEF conclave, delivering an inaugural speech that called for an open global economy and a new international political order. The TCC welcomed the Chinese president’s Davos debut on the world political stage and is pleased to see China take the reins of global leadership. The irony should be lost on no one that the two richest men in China, Wang Jianlin, and Jack Ma, the latter the founder of Alibaba, China’s largest e-commerce company, accompanied Xi.

RELATED: No Winner in a China-US Conflict: Chinese Foreign Minister

The U.S. and Chinese economies are inextricably interwoven. They are less autonomous national economies than two key constituent parts of an integrated global economy. Trump has accused China of manipulating its currency, threatened to levy a 45 percent tariff on certain Chinese goods, and suggested he would use the “one China” policy as a bargaining tool in trade negotiations. Yet the simple fact is the TCC in both China and the United States are dependent on their expanding economic ties.

Foreign direct investment (FDI) between the United States and China has surged over the past two decades, according to a 2016 report by two industry groups, Rhodium and the National Committee on U.S.-China Relations. In 2015, more than 1,300 U.S.-based companies had investments of $228 billion in China, while Chinese companies invested US$64 billion in the United States, up from close to zero just ten years earlier, and held US$153 billion in assets.

Notwithstanding Trump’s ranting about a U.S. trade deficit with China, Chinese exports to the United States are transnational capitalist exports. And for that matter, an overvalued Chinese currency actually benefits transnational corporations that export from China to the U.S. and the global markets. Indeed, as Trump himself has insinuated, his anti-China rhetoric and threats are aimed at creating an environment in which he can twist the Chinese state into making greater concessions to global capital (the same can be said for his anti-Mexico discourse).

Moreover, according to the U.S. Treasury, the largest foreign holder of U.S. debt is China, which owns more than US$1.24 trillion in bills, notes, and bonds or about 30 percent of the over US$4 trillion in Treasury bills, notes, and bonds held by foreign countries. In total, China owns about 10 percent of publicly held U.S. debt. In turn, deficit spending and debt-driven consumption have made the United States in recent decades the “market of last resort,” helping to stave off greater stagnation and even collapse of the global economy by absorbing Chinese and world economic output.

It was not, hence, a mere idle threat when China’s lead multibillionaire, Wang Jianlin, whose Dalian Wanda Group recently acquired the AMC cinema chain, warned the Trump regime that he would withdraw $10 billion in investments in the film and real estate industries in the United States. “ More than 20,000 employees wouldn’t have anything to eat should things be handled poorly,” he said. “The growth of English films depends on the Chinese market.”

Trumpism encapsulates the conflicting economic and political pressures on the U.S. state. The crisis of global capitalism has become more acute in the face of economic stagnation and the rise of anti-globalization populism on both the left and the right of the political spectrum. Trumpism does not represent a break with capitalist globalization as much as a conflictive recomposition of political forces and ideological discourse as the crisis deepens and as international tensions reach new depths.

The U.S. military-security apparatus finds it difficult to adapt to new global realities and U.S. rulers rely on imperial bluster for its legitimacy among a chauvinistic base of the U.S. workers experiencing downward mobility and disaffection with the establishment elite. U.S. provocations in the South China Sea, its “Asia pivot” and anti-China bravado are escalating tensions even as they threaten to aggravate the crisis of global capitalism. A recent U.S. intelligence report warned of war between the U.S. and China, and one senior Chinese military official quoted on January 27 in the South China Morning Post warned that war with the U.S. under Trump is “not just a slogan” but threatens to become a “practical reality.”

What does rising Chinese global leadership mean for the global working class? The Chinese state is a capitalist state. The rise of a powerful TCC in China and of the super-rich and a high-consumption middle class alongside the rising exploitation of hundreds of millions of Chinese workers, now at the cutting edge of labor struggle worldwide, is well known. Yet Chinese capitalism has not followed the neoliberal route to global capitalist integration. The state retains a key role in the financial system, in regulating private capital, and in planning. This allows it to develop 21st-century infrastructure and to guide capital accumulation into aims broader than that of immediate profit making, something that the Western capitalist states cannot accomplish due to the rollback of public sectors, privatization, and deregulation.

A set of more balanced transnational state institutions that reflect the new realities of a multipolar and interdependent global capitalist system could de-escalate mounting international tensions and the threat of war. We should harbor no illusions that a new global political architecture can either humanize capitalism or resolve the crisis absent mass struggle for a redistribution of wealth and power downward. The return to an interventionist capitalist state around the world, however, may make more effective the demands placed on states by popular and leftist struggles from below.

William I. Robinson is professor of sociology, global studies and Latin American Studies at the University of California at Santa Barbara. His most recent book is Global Capitalism and the Crisis of Humanity.