EU Should Invest in Development, Not Security in Africa

The EU must espouse a transnational approach with a clear development agenda that replaces its current security policy. 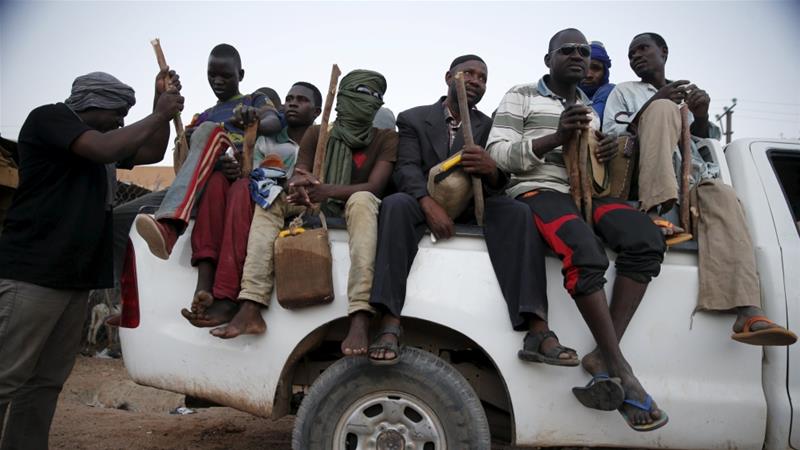 Migrants sit in the back of a truck at a local immigration transit centre in the desert town of Agadez, Niger. Akintunde Akinleye/Reuters

8 Feb 2017 – One year ago, 22-year-old Patrick left Douala, the largest city in Cameroon, to become a football star in Europe.

A talented midfielder and an ambitious young man, Patrick felt compelled to reach Europe to help him to realise his dreams. But, as he passed through Agadez in Niger, which has become a major transit hub for migrants taking the Central Mediterranean route, reality proved to be grimmer than he had anticipated.

Patrick and two of his male relatives, also travelling from Douala, were beaten, robbed and held captive by organised predatory groups. Finally, their tumultuous journey came to an end in Algeria, where they were put in jail by the local police. They were then sent back to Niger through a return programme funded by the International Organization for Migration (IOM).

Patrick was distraught. “We don’t know what to tell people in Douala. They all saved some money for our trip and we all failed,” he explained to us.

He is one among 350,000 migrants, mostly from West Africa, who travelled through Agadez in 2016 on their way to Libya or Algeria. In response to the influxes, the European Union recently negotiated a bilateral compact with Niger as part of its Migration Partnership Framework “to curb the flow of irregular migrants” (PDF).

Over a year after the 2015 summit in Malta’s capital city Valetta, European leaders met again in the Maltese capital, on February 3, 2017, to address the “root causes of migration flows” along the Central Mediterranean route and to find “solutions to migratory pressures” into Europe.

In their latest bid to purportedly thwart “human trafficking and illegal migration”, the Italian government pledged $215m to Niger, Libya and Tunis, ahead of the meeting. These transit countries will be expected to patrol borders and prevent migrants from reaching European shores.

This year’s meeting ended with the Malta Declaration, which calls for “supporting the Libyan national coastguard” to reduce “illegal flows into the EU”, an approach deemed “delusional” by Doctors Without Borders (known by its French initials, MSF), in a country where migrants face abuse, violence and exploitation.

The current reactive measures have shaped the EU’s strategy on migration, especially with partners in West Africa. Our latest research in Niger suggests that they are also based on flawed assumptions.

Migration as an ‘anomaly’

First, it is not the poorest of the poor who move. Many, like Patrick, are educated and forked out a sum that was worth a year’s average salary in Cameroon for his journey.

Purely economic approaches to decreasing migration by reducing poverty and creating jobs will not solve the equation in both the short and long term, unless other drivers are included.

Second, the decision to migrate is not exclusively driven by cost-benefit choices. The lure of “the possible” played a significant role in shaping Patrick’s and his family’s decisions, regardless of the available information, associated risks, restrictions and obstacles.

So explanations of such once-in-a-lifetime decisions based on purely rational choices miss the intangible reasons – such as individual aspirations, social exclusion, and cultural background – that together contribute to the decision to migrate.

Finally, donors and states tend to understand development purely within the context of borders and nation-states.

Through this lens, migration is perceived as an anomaly that needs to be corrected to restore the status quo ante.

Closing the migration cycle becomes the main tool in such a one-way perspective on development, where northern countries devise what they call “solutions”, and implement them in southern countries.

But what if migration were a norm, as opposed to a deviation from the norm? And what if it were also a possible solution to today’s so-called migration crisis? We must think more critically in order to carry out our responsibilities with effect.

The circulatory movement of people, livestock and goods has historically been at the heart of the socioeconomic structures of sub-Saharan Africa.

The ability to move is not only at the core of survival for most subsistence communities in the region but also a key cultural, social and economic driver, despite the drawing of borders.

Similarly, migration through Agadez is nothing new. The city, historically known for its trans-Saharan trade, has always served as a crossroads between Sub-Saharan Africa, Niger and North Africa, regardless of political borders.

READ MORE: The cemetery of unknown refugees from the Mediterranean

What is new is European countries exerting control over legal migration channels, reshaping regional dynamics through power and economic influence, and in the process devastating the local economic eco-systems.

The EU’s approach to mobility seems to have a one-way relationship with development, based on the assumption that development should and will stop unwanted migration.

So what is the alternative?

It must espouse a transnational approach and lead transformative interventions with a clear development agenda that replaces its current security agenda.

A donor we interviewed for our research in Agadez made a compelling – and counter-intuitive – case: “They [African countries] should spend European taxpayers’ money on roads and infrastructures. Building a highway in the desert may not be popular in Europe, but that is probably the best way to develop the zone, favour cross-border economic exchanges, and mitigate the risk of endless tragedies in the desert or the Mediterranean”.

OPINION: UN refugees and migrants summit – All talk, no action

In such a scenario, young men such as Patrick would not lose a full year of earnings or face life-threatening dangers while on the road. Such an investment will yield more natural and safer migration among Sub-Saharan African countries and to their northern neighbours in the continent, as has been the case throughout history.

This article is based on the authors’ participation in a webinar with the Migration Policy Institute on EU partnerships with third countries on migration and a forthcoming Samuel Hall report for IOM Selling sand in the desert, funded by the EU.

Nassim Majidi is the founder and co-director at Samuel Hall, an affiliate researcher at Sciences Po’s CERI, and a Research Associate at the African Centre for Migration and Society – University of the Witwatersrand, South Africa.

Herve Nicolle is the founder, co-director and chief economist at Samuel Hall, focusing on education, health and skills/employment.

Pauline Vidal also contributed to this article. She is a research assistant at Samuel Hall, focusing on migration in the Horn of Africa.