With each new settlement, the prospect of peace and the formation of a Palestinian state become even more unattainable. 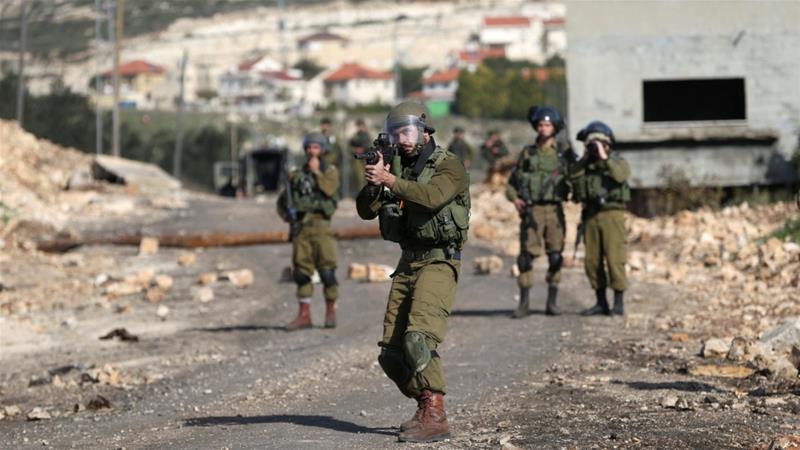 An Israeli soldier aims his weapon at Palestinian protesters during clashes after a protest against the settlement of Qadomem, in the Occupied West Bank.
Mohamad Torokman/Reuters

13 Feb 2017 – Israel is above international law, or so it seems. On December 23, the United Nations Security Council passed resolution 2334, re-affirming the illegality of Israeli settlements.

The vote was significant for two reasons: Unlike previous UNSC resolutions targeting Israel, it was not vetoed by the Obama administration, who decided to abstain. Secondly, it demonstrated an international consensus on the illegality and illegitimacy of Israel’s settlement enterprise, and showed that these settlements constitute an obstacle to peace.

These points were reiterated by then-US Secretary of State John Kerry in his December 28 speech, and subsequently in the January peace conference held in Paris, which was one of the largest peace conferences ever held in terms of high-level participation.

The fact that even Israel’s staunchest ally, the United States, affirmed the illegality of settlements, did nothing to change the course of the Benjamin Netanyahu government.

On the contrary, since the UN Security Council passed the resolution, Israel hurried to approve the construction of even more houses in illegal settlements on Palestinian land. Within one month, the government gave the green light for the construction of more than 6,000 housing units – a higher number than the total number of settlement housing units approved in all of 2016.

The bill also retroactively “legalised” existing outposts, which are considered illegal even under Israeli law. Yet under international law, both settlements and outposts are illegal. There is no such thing as a legal settlement.

Although the government of Israel and settlers have been building settlements and outposts in the occupied West Bank and East Jerusalem for nearly half a century, this law crosses a dangerous red line, to the point where even Israel’s attorney general, Avichai Mandelblit, declared that it violated the Fourth Geneva Convention and that he would not defend the bill if it was challenged in an Israeli court.

The continued Israeli policy of building settlements makes the establishment of a viable, contiguous Palestinian state increasingly impossible and seriously threatens the two-state solution. But settlements are not merely a factor to be dealt with in future negotiations: their presence has serious consequences for Palestinians, even now.

The building and expansion of settlements is pushing Palestinians out of the Area C, which constitutes 60 percent of the West Bank and is under full Israeli control.

Settlers routinely attack or harass Palestinians living close to settlements and they also vandalise Palestinian properties in complete impunity, with the aim of forcing Palestinians to relocate to overcrowded cities outside the Area C.

Moreover, in order to expand or build new settlements, Israeli bulldozers routinely demolish Palestinian homes and other Palestinian infrastructures in the Area C.

Farmers and Bedouins, who need large tracts of land to grow crops and herd cattle, have been hit the hardest and forced to change their traditional lifestyle, losing their means of livelihood in the process.

Yet, past experience has shown that these statements are ineffective and have never deterred Israel. The same can be said about UNSC resolution 2334, which was adopted under Chapter VI of the UN Charter, meaning that it doesn’t obligate Security Council members to take concrete steps if Israel violates the resolution.

Now, more than ever, the international community must take concrete steps, such as economic and diplomatic sanctions, against Israel. This is not simply a moral or legal obligation: it is also in everyone’s interests.

International law and international humanitarian law, much of which has been drafted following the horrors of World War II, is meant to prevent the re-occurrence of such tragedies. Countries that flaunt international law (and are allowed to get away with it) invalidate basic human rights, pushing humanity back towards darker ages, when colonialism and ethnic cleansing were the norm.

Palestinians might be the ones who are most affected by Israel’s settlement enterprise, but in the long term, we will all be affected.

Dr. Rami Hamdallah is the Prime Minister of the State of Palestine.